What do I mean about it being a “prolific year?”  Some would say I am always prolific.  And well, I am.  But last year I had a goal--twelve books in twelve months.  And really, if you consider HearthLand, I almost made it.  So that was cool.  I had a prolific year, but not to the extent I’d hoped. 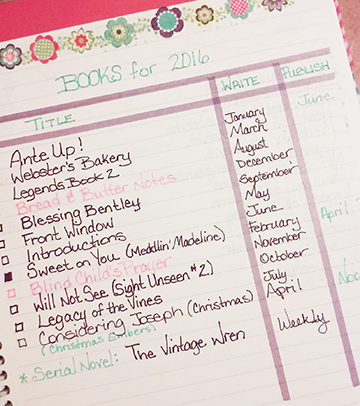 Another twelve books in twelve months.  Can I do it?  I don’t know.  Let’s face it.  It’s a bit… ambitious. But I thrive on this kind of self-challenge.  In that sense, I’m a bit like Cassie from The Vintage Wren.  So, in January, I made my list.  First up… Ante Up! Look.  It’s a long book.  And I was busy with Jack, so I didn’t get it done.  The good news is that March’s book is Webster’s Bakery–a book that is mostly done (why do I sound like Miracle Max now?).  Just needs to be finished and some revamping accomplished.   So, the chance of keeping up to date grew right there.  February was for Madeline and Sweet on You.  and I did it–by February 5!!!  Then, as you saw in my evils of sports post, it got a remodel.  I had to go over the entire thing.   Guess what?  It’s better than ever.  WOOT!

So here March is and I’m working on Aggie (almost done) and trying to get to Webster’s.  We’ll see how that goes, okay?  I’m glad I have a couple of other “finish and polish” books in the line up.  It’ll give me the opportunity to keep going.  And really, I’ve written 3/4 of another book this year–the January volume of  The Vintage Wren!  *pumps fist*

One of the things I really wanted to make a priority was finishing up some series and things.  I tend to be prolific about those.  I can have a prolific year in series completions.  Yeah… if you look at that image up there? GULP.  See that “Bread & Butter Notes”  Yeah.  Book one of a three book series.  a NEW series.  See Sweet on You?  That’s coming out in April, I believe.  Guess what?  It’s the first book in a six book series.  Hey.  Ashley has been aching for it since the day I found those pictures and conceived a six-book series.  GULP.

But then there are a few other books–ones that aren’t the first in a new series.  For example, Blind Child’s Prayer?   It’s the second book in the Ballads from the Hearth series.  You know, the one I started in January with the publication of Jack?  At least that series is 100% unrelated to one another.  The only thing tying them together is that they’re based on songs Dad sang.  None of the stories are interconnected, so people won’t be waiting to hear what’s next.  You’re welcome?

Legends of the Vengeance: The Second Adventure.  I finally got that on the docket.  My friend Clark (from the sports post) is going to help me get this ready to go in July.  It’s my birthday present to me.  And Front Window? Yeah.  Time for a new ALEXA!  WOOT!!  It was supposed to be the last in that series.  I’ve come up with three more ideas.  *blush*  Obviously, the Legacy of the Vines series needs another infusion.  I only have ten more of those to publish.  Just ten.  No biggie.

But I’ve got to say… the one I’m probably most excited about is Will Not See. This is the second book in the Sight Unseen series.  We’re going to get some more of Ella, of course.  I mean, there’s a certain bit of this surprise in the garage to explore.  But you’ll get to meet Mikayla and learn just who she is and what makes her so similar to and very different from Ella. 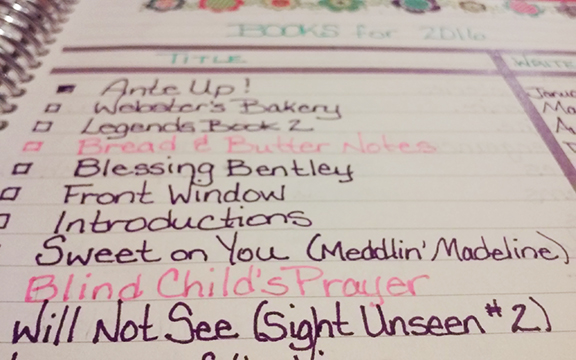 You know, before I wrote Not a Word, Ella’s story was my favorite.  I so related to her.  It’s the story that impacted more of my early readers than any of my other books save Past Forward.  That’s pretty cool.

So yeah… I’m hoping for a very “prolific year.”  But my idea of reducing the number of series that I have in progress… yeah.  Not happening this year.  I’m trying, though.  My  mom would say, “Yep.  Very trying.”

Previous Post: « You Know How Mom Always Said, “Life’s Not Fair?”
Next Post: Unlikely Inspirations: Or how writers fake it. »