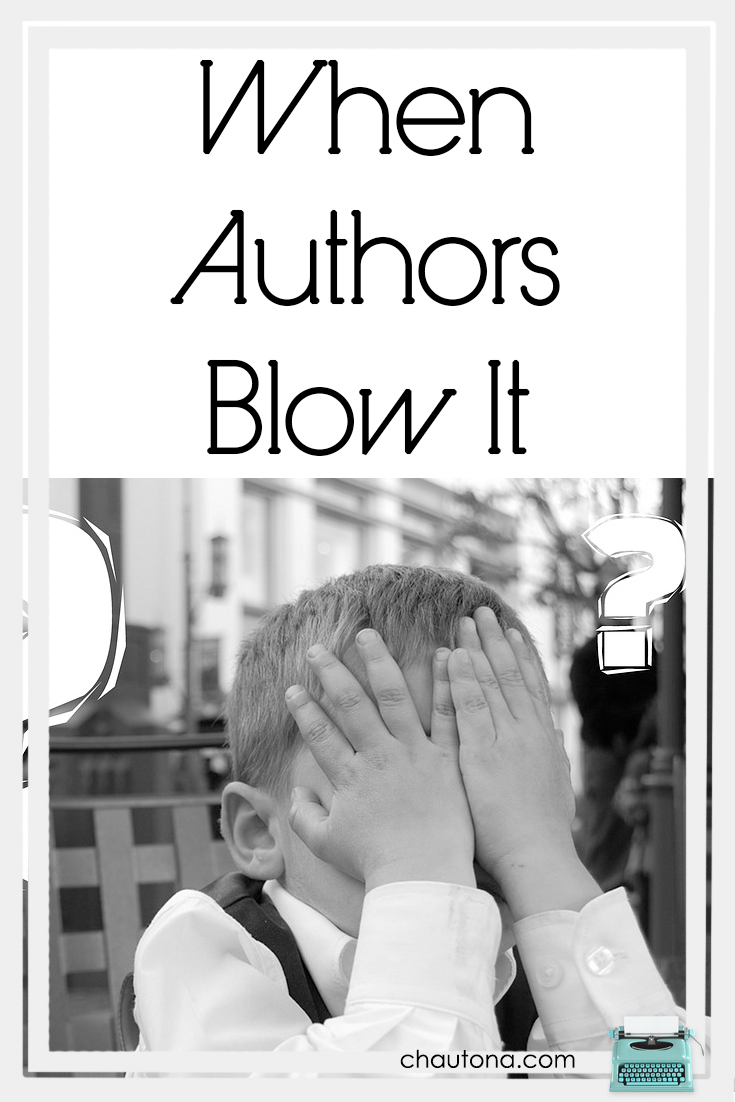 Picture the scene. There I was, blithely editing Past Forward (I think volume 3), when I saw the date.  February 14.  It was supposed to a big deal–a huge day in the lives of characters from a related book coming out soon.  Just one problem.

A year before, on that day, almost all the characters in that book, Ready or Not, had experienced the worst that life has to offer–the death of a daughter, a son, a sister, a brother-in-law, a mother, a father.  Eight children orphaned on February 14.

And I’d planned a party for the one-year anniversary.

Note: all links in this post should be affiliate links that provide me with a small commission at no extra cost to you.

I wish I could say it was the last time I ever blew it (or almost).

Oh, you wanted to hear about those?  You want to mortify me?  Well, fine. It’s probably good for that pride eradication program I keep swearing I’m going to join.  So here goes.

Discovering Hope.  Chad is in that book.  I um… *gulp* didn’t realize I’d put someone by his name in that book in the same town where… you guessed it. He grew up.  It had to be Chad.  Two Chads in the same church/town/time frame? Oy. Had to change his last name, of course.  Ahem.

And, because Hope does tend to create lots of work for me as an author as I shared in THIS post, I should probably admit that in a coming book which has been mentioned in several like Tarnished Silver and a few others, one of the characters in that book has a mom wanting to set him up with Hope.  Except she’s met Jay.  And this is what he gets for dawdling around.  The problem is that I had hoped (no pun intended, of course) to have Blessing Bentley take place a year before it does.  Now I can’t.  The timing would be all off whack.  Again.  Oops. Yeah.  Authors sometimes blow it.

And that timing thing?

It’s a bit of a nightmare, too.  You see, I don’t write these books in chronological order.  I write about the characters who interest me most.  So I wrote about Aggie first in Ready or Not. But Noble Pursuits begins about six months before the first chapter in Ready or Not.  And then I did the Hartfield Mysteries.  But those take place before Chad meets Willow–while he’s a rookie. But I published the most recent one in that series just last fall, after half a dozen years have passed in the timeline of Rockland.

BIG Mistake. HUGE.  (Name that movie that I should not be admitting I’ve seen.  Oh, wait. You’d have to admit to having seen it, too!  mmmwwaaahahah!)  Okay, it really wasn’t a mistake, but it could have been if people didn’t know about my Suggested Reading Order (which I need to update. Again).

I’m working on a printable timeline.  Seriously.  I am. Why’d you say thank you? Ooooh… you thought it was for you. Yeah! Let’s go with that!  It’ll save that pride we tried to demolish a bit ago.  Snort.

But it’s not always frustrating when authors blow it.

My favorite near-mistake was in Not a Word. Here I was. In Brant’s Corners!  I had this perfect opportunity to show Luke before he ever met Aggie. Not only that, I had a chance to show what the town thought of this family coming in.  I had lots of exciting opportunities to show little tidbits I’d never been able to before and…

He wasn’t in the plan.  Anywhere.

But there I was, writing along one day, and bam!  Luke’s out at Uncle Zeke’s farm!  What???  Mac and he took to one another.  They talked.  They became friends.  And because of that friendship, Mac learned to trust the Lord.

For more about the writing of that book, this week’s “Book Chat” over on YouTube is about Not a Word.  Check it out!

Sometimes, when authors blow it, it’s a catch-22.

No, really.  I did a whole blog post about how sometimes you create these wonderful backstories for your minor characters or your subplots and they really enrich the book you created them for!  And… sometimes that means you kill a chance to tell their stories sometimes in the future.  OOPS!  Would I do it over?  Would I change Mason’s story in The Matchmakers of Holly Circle? No. That blog post explains why.  I won’t bore those who’ve read it and rehash it here.

Do I create these issues for myself?

Someone asked me once if I created more problems for myself with my “willy nilly” style of writing and publishing.  Probably. But on the other hand, if I hadn’t… if I hadn’t published book one of the Aggie Series, published a couple of Past Forwards, and then worked on book three of Aggie.  If editing that Past Forward hadn’t come right when it did, I strongly suspect that I would have gone to print with a huge celebration on a rather sad day in a family who wouldn’t find that redemptive but hurtful.

Previous Post: « The Newcomer by Suzanne Woods Fisher: a book review
Next Post: Baggage: Claim It or Not, We All Have It »