The music always changes—sprightly for a romance or a comedy, tense and imposing for a drama. A combination for both. And then it begins…

I’ve watched a lot of old movies. Musicals, dramas, mysteries, patriotic, and almost everything in between. I love Jimmy Stewart, Deanna Durbin, Frank Sinatra, Gene Kelly, June Allyson, and Tom Drake. Oh, yeah. No one waltzes like Tom Drake. Between his “Yes ma’am” in Two Girls and a Sailor and his waltzing in Meet Me in St. Louis and I’ll Be Yours, it’s the closest thing I come to swooning after Gilbert Blythe’s words I talked about in THIS POST.

So in all these movies, I’ve learned a thing or two. They teach awesome life lessons, although I doubt they meant to. Don’t believe me? 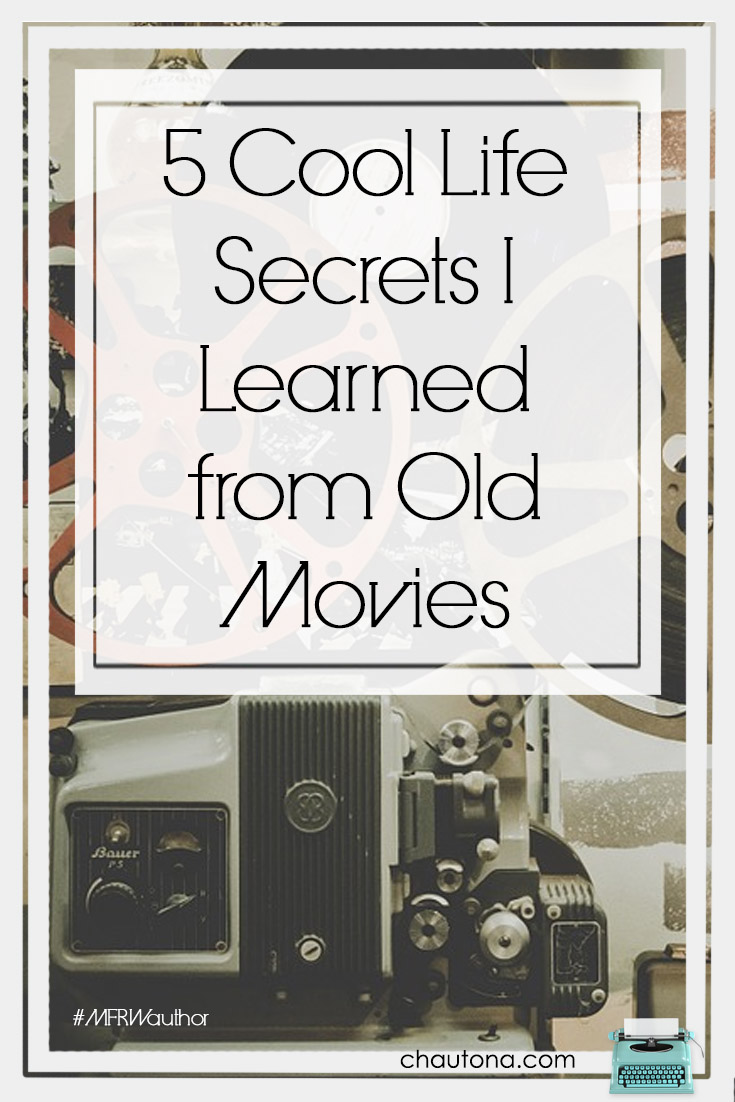 Links in this post may be affiliate links which will provide me with a small commission at no extra expense for you.

1. There’s a song for every occasion. Seriously. 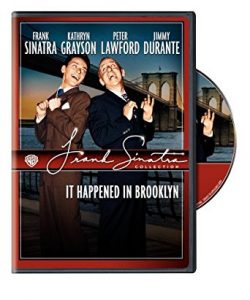 Is it raining? Sing!

Is it spring? Sing!

Are you afraid? Whistle (a happy tune)

Is it night time? Well, it’s a “Grand Night for Singing”, don’tcha know!

Really love your hometown landmarks? Sing about the Brooklyn Bridge.

Oh, but whatever you do, “It doesn’t matter if it’s classic or rock, just as long as it comes from the heart.” Jimmy Durante said so. He wouldn’t steer you wrong, and with his schnoz, he could steer a battleship. (No, that’s not one of his jokes, but I can hear him saying it, can’t you?)

See, Aggie had it right. If anything is right, wrong, or indifferent in the world, SING! (She recommends hymns). And as Judy Garland tells us in Summer Stock, “If you can’t sing good, sing soft.” (I think that’s the musical equivalent of “Make a joyful noise.” Let’s go with that one.

Oh, and if you think it’s not realistic for people to break out into song over any little thing, you don’t know the Havigs. A friend’s husband said that to me the first time I met him. After a few months of stopping by my house at lunch to see his family (they spent a lot of days at our house), he finally said, “Wow. You really do sing all the time.” 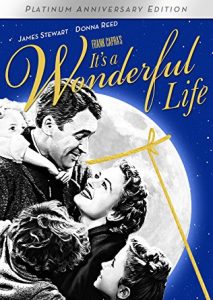 Don’t believe me? Ask George Bailey about it. He spends his entire life trying to escape the ordinary. All of it. And if you think about it, he also spends his entire life being anything but ordinary. He rescues his brother, he rescues the Savings & Loan, he rescues the town from the clutches of Mr. Potter. It takes something extraordinary—him choosing suicide as the solution to his problems—for him to appreciate the ordinary.

It just hit me that it’s rather like the good guy’s version of A Christmas Carol. Strange…

But that’s not the only one. What about Deanna Durbin’s Nice Girl?  Here you have Jane Dana—oldest of three daughters and destined to a life of relentless ordinary. She pictures her epitaph reading, “Here lies Jane Dana, scientist, and spinster. She died at the age of 82, a nice girl.”

Supposedly that’s bad. But when a little sophistication enters her life in the form of a wealthy man… yeah. She learns that the locals who annoyed her before are true friends—rooting for her, even. And maybe, just maybe, that boy next door isn’t as boring and ordinary as she thought. Or maybe it’s that she learned ordinary isn’t synonymous with plague-bait.

3. We’re braver than we think. 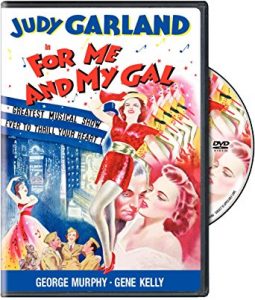 This one chokes me up. Look, I’m not an emotional gal, but if anything will make my throat ache and my eyes leak all over the place, it’s a good hero. My mind keeps going to war movies here—but I can’t help it. What about…?

For Me and My Gal— Selfish Harry Palmer just wanted to delay his entry into the army long enough to get married… just long enough. However, the way he went about it—so bad on so many levels. But man, when he steps up and saves the day despite a self-imposed handicap… Yep. Gets me every time.

Yeah, he was selfish. Sure, he was a coward. But the Lord made His creatures stronger than we give ourselves credit for.

Audie Murphy. Need we say anymore? The underdog of underdogs. The young man no one wanted. Time after time, he steps up to the plate, bags home run after home run, and wins the game. The most unassuming man of the bunch keeps them all together and in the end, saves them. This is probably the bravest kid in the history of kids joining the armed services way too young. 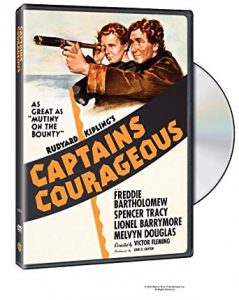 White Christmas— It’s a song, sure. But remember at the end, “We’ll follow the old man wherever he wants to go…” That’s my idea of a hero. You inspire that kind of loyalty—even after the war is over and everyone has settled into a new life—you’re a hero. And a military guy making a go at civilian life… I’m sorry, but from what I’ve seen in my own life? That’s brave, too.

Captain’s Courageous— When Spencer Tracy makes sure that Freddie Bartholomew doesn’t know just what has happened to him and tries to comfort the boy until he has to go under. That’s bravery on a whole new level.  “… yay ho little fish don’t cry don’t cry…”  *sniff* 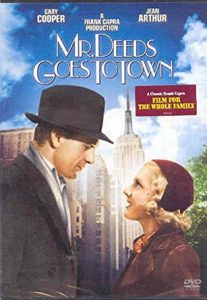 Arsenic and Old Lace— Those aunts are hysterical, aren’t they? Uncle Teddy is pretty adorable, too. It’s a horrible, hilarious movie that just goes to show that no matter how “normal” things may appear, we’re all a bit quirky in some way or another.

Mr. Deeds Goes to Town— After all, Mr. Deeds is “pixilated.” The sweet old gals from Mandrake Falls said so. And well, if anyone should know…

Ball of Fire— Look, if those guys in that old house aren’t a bit “unique,” I don’t know who is. No, they’re not “normal” by most peoples’ standards, but who cares? The sweet old guy married to “Genevieve” who spent the first week of his honeymoon bidding his wife goodnight by kissing her hand. Yeah. Totally not normal, but super cute in my not-so-humble opinion. And I’ve heard of cold showers, but cold water on the back of the neck? “You had to water your neck…” Mmmwaaahaha.

Still have doubts? Well, just watch anything Danny Kaye did. That’ll settle it right there. Well, except for The Five Pennies. I think he was startlingly normal in that. Then again, we’ve already established that normal is relative, so there you have it! 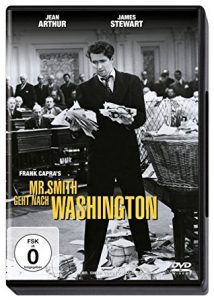 African Queen— An unlikely duo in a small tramp steamer takes on a German battleship. Look, it wasn’t the Bismark, but they got that Luise!

12 Angry Men—oh, this one gets me every time. A boy is almost sentenced to death because of the laziness of a jury. The good guy, in this case, was actually two guys—the jury member who refused to be pressured and the kid who didn’t do what he’d been accused of.

That’s not all, you know. I’ve learned lessons in Solomon-like wisdom, showing kindness when you don’t feel it, how to turn puddles into dance numbers, and why you need some seriously great shampoo if you’re stationed in the South Pacific. They’ve got man-sized grit over there!

There you have it. Five cool life secrets I learned from old movies. I bet I could have come up with a dozen more, but you’d have more fun just watching one. I recommend For the Love of Mary with Deanna Durbin.  Just don’t call the president asking about fish!

See… you can learn a lot from old movies.  Which one should I watch next…?