A cold, blustery morning—or maybe a balmy summer evening. The day of the week, month of the year, season? It never mattered. From as young as I can remember, a new book meant a few hours lost in early 20th century Brooklyn, the prairies of Kansas and North Dakota, River Heights… In short, a book.

Even today, when a new one arrives, my fingers itch to open the pages. Just one chapter. Another. If I’m not careful, before I know it, I’m done.

Yeah, I’m one of those obnoxious folks who inhales books with the intensity of someone who inhales things of a less legal nature.

A Ruby Glows was no exception. When I read the synopsis, I requested a free copy from Celebrate Lit and it landed in my inbox. On a day I couldn’t read. A couple of weeks later, I saw the due date… two days away, and threw all my other work out the window. Reading time. Finished it and decided to write the review right then. Went to write…

I misread the book in my planner. That was for another book. OOPS! Off I went to read that one. All this to say, it’s been a few weeks since I read it. And I think that’s good. It’ll be interesting to see how a bit of distance affects my review. Let’s dig in. 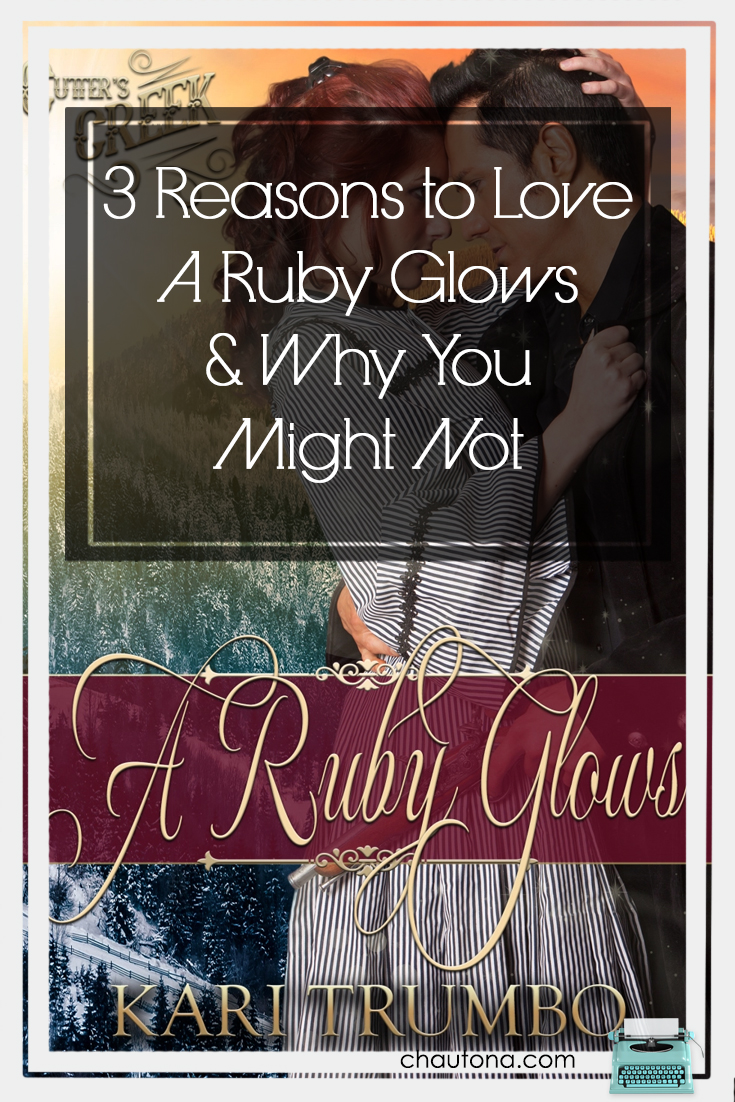 3 Reasons to Love A Ruby Glows

A historical romance set in Montana, A Ruby Glows tells the story of a rather wounded, broken young woman—Ruby, of course. The book has quite the cast of characters who are seamlessly woven in and out of the story as their turn in the arc approaches and leaves. I’m not sure about the word count, but it read like a novella in that I got through it rather quickly. So… why would you love it?

It starts with the book synopsis. Look at this thing:

Ruby’s heart froze as she threw her dead husband over the cliff.

Genius! Kari Trumbo does a fabulous job of describing setting, characters, events—and all without torturing the reader with excess words. Nathaniel Hawthorne could have taken lessons from her in that respect. You know where you are and what it all looks like at any given moment without page after page of tedious detail that usually makes me want to pull out my hair. So, if you love rich description without excess verbosity, you’ll love that part of the book.

Not only is the main story arc an interesting idea, so are the subplots. I enjoyed seeing where they’d go and what would happen next. So if you like troubled women striving to overcome the things life has thrown at them and battered them with, there are at least three of those in here—all very different and semi-unique in how they are done.

One of my pet peeves is when Christianity in any and all of its forms is shoved down the throats of readers with an obvious attempt to drive someone to a particular doctrinal stance. I’d rather see them nudge the reader to understand why someone believes something or to the Word to learn what it says.

Look, I know sometimes authors, no matter how careful, prick a reader when they didn’t want to—make the reader feel as if they are being proselytized. I feel for authors because I know just how hard it is to show those other understandings or open those questions without being preachy. So, I have to give Trumbo huge kudos for managing that beautifully. She tackles faith issues in a matter-of-fact and respectful way without insulting those she obviously disagrees with. I thought it was beautifully done and NOT overdone. Seriously, the scene where Ruby speaks with the minister’s wife was my favorite part of the book.

Yeah, like every book, A Ruby Glows has things that some won’t enjoy. It’s a fact of fiction—someone won’t like something in every book. So, I thought I’d throw out what I didn’t like in an effort to explain my star rating.

Both of the main characters, Ruby and Beau, are uninterested in pursuing a relationship for opposite reasons. Now the book is obviously about how they do. You get that much from the synopsis. But I found them to both to say one thing but their actions show another. It wasn’t so much a back and forth indecisiveness. Instead, both of them said they wanted nothing while every action showed they did. If it had been just one of them, I might have called it a character flaw and it might not have bothered me. But it wasn’t. I actually found it quite implausible.

Some of the things Ruby was supposed to have said that made her lose a job for being too “backwoods”… Yeah. They sounded more like diner talk than backwoods (it may be authentic, btw.  It just didn’t FEEL like it). The whole scene was created to get the character to where she needed to go. I get that. And it would have worked if the author hadn’t gone quite so far overboard with those “hick-isms.” There were a couple of over-the-top instances like that, and they really made the book hard to get through at times.

So, why my rating?

I gave A Ruby Glows three stars because Amazon defines that as “okay.” That fits the book as a whole for me. I did not DISlike it. In fact, did really like parts. But between “I liked it” and “It was okay” is this chasm  it fits in somewhere. It could have been a GREAT book. Really. It could have. It had all the promise of it. But the things I mentioned and a few more just really spoiled the story enough for me that I couldn’t give it four stars this time.

I do recommend A Ruby Glows for anyone who loves clean romance and western/historical fiction. Based on the reviews I saw, if you love Trumbo’s work, you’ll absolutely love this book. It’s number fifteen in a series, but I didn’t feel “lost” at all. So, if my issues are things that don’t bother you, seriously—give the A Ruby Glows a chance. I am not sorry I read it, and it was good enough to ensure that I will try another one.

Because I like to support other authors that way!

Previous Post: « 5 Cool Life Secrets I Learned from Old Movies
Next Post: 15+ Memories: Why I Know I Had the Best Childhood »