What is this “winning without a word” thing?  Let me set the scene.  1985.  Ninth grade.  Peniel Christian School. Noel, Missouri.

By the time we got to I Peter 3, it was May and getting pretty muggy every day.  Our school room was in the church basement, so it was fairly comfortable down there.  The first of the month came and we open our Bibles.  I Peter chapter 3.  We’d already  memorized all five chapters of James and the first two of I Peter.  We opened with chapter three.

In the same way, you wives, be submissive to your own husbands so that even if any of them are disobedient to the word, they may be won without a word by the behavior of their wives, 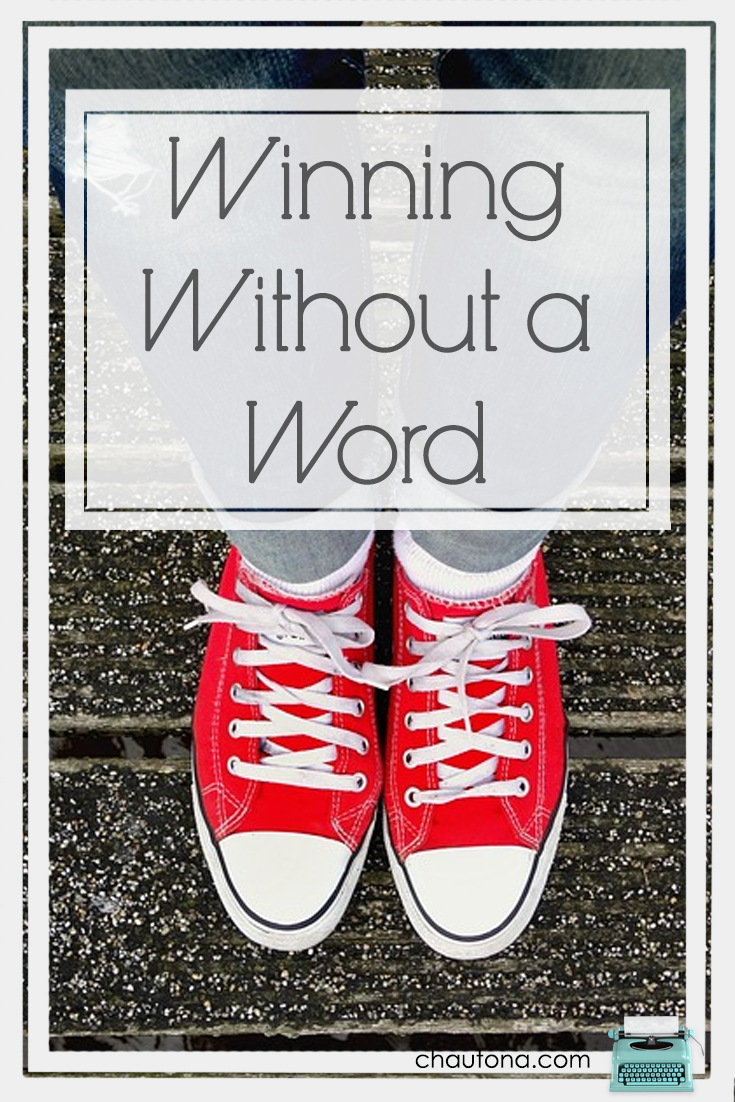 The words, if you want the raw truth, meant nothing to me.  Seriously, I memorized them, recited them to get my credit for it, and moved on to prepositions and algebra.  I wasn’t married, had no intention of ever being married, and in my fourteen-year-old arrogance, I figured my behavior was probably pretty good by that point.  Mom and Dad insisted on it.

But then I did get married.  And one day that verse came to mind.  So, I sat down with my trusty Bible and reread it.  Suddenly, I had new and startling things to consider.  So… if my husband became “disobedient to the Word,” I could win him over to the Lord’s will again without words?  My one good “tool” and I’m not supposed to use it?  EEEP!

Look, I’m not here to argue relational hierarchies or whether it’s okay for me to say, “Look, bub.  That’s wrong.”  I just wanted to give a bit of background before I share when this verse really kicked into overdrive for me.

What?  It wasn’t when I convinced my husband that living on a farm with geese….

Um, yeah.  No geese.  No farm.  And never tried.  But Biblical principles aren’t limited to the specific audience–always.  I mean, what if a man wanted to “win” over his best buddy–to make his pal “obedient to the Lord.”  Sure, he could just come out and say, “Look.  You can’t just ignore the Word of the Lord.  He says that every knee will bow, every tongue will confess, and they’ll do it to demonstrate that Jesus is the King of Kings and Lord of Lords.  You gotta obey!  You gotta yield to the Father!”

Yeah.  He could do that.  He might get himself slugged or lose a best buddy, but he could.  And really, sometimes he should.  But sometimes, we can win others over… you got it!  By our behavior.  It isn’t Scripture, and I don’t want to put it on par with Scripture, but someone (and it is often attributed to Francis of Assisi, but there’s no proof of that) said something that really does have a good place in our lives.  The saying goes, “Preach the gospel always.  If necessary, use words” (there are variations, of course).

Look, anyone who knows me knows that I have no problem “using my words” (although that phrase makes my teeth itch!).  But I’ve always striven to LIVE the gospel first, tell it later. I am a strong believer of overt evangelism, but people like me with our blunt, tell-it-like-it-is communication methods can be pretty… um… off-putting.

So, I try to live first, tell second.

And that’s what some of my characters do.  Hope in Discovering Hope lived her faith before Jay and made him curious.  Annie was drawn to the Lord first through the lives of the people in HearthLand.  And in Christmas Embers, the reverse happens.  There is no time.  It’s speak the word NOW or lose the opportunity.  I think there’s room for all approaches.

Keith in Justified Means also used the “winning without a word” approach, I’d say.  He had kind of a rough start with it.  After all, it’s not very “winsome” to kidnap someone and hold her against her will.  That tends to be even more off-putting than “ramming Jesus down someone’s throat” the first time you meet him.

Of course, he had no way of knowing the far-reaching effects of his decision to show Jesus before telling of the One who died for her.

You know, I have gotten a few emails over the years–emails that said things like, “the Lord used your writing to draw me back to Him” and “I never understood that people really do live their faith until I read what your characters do.”  Through fiction, I “win” with lots of words, but my characters often strive to do it without them.

Have you ever discovered that your actions spoke louder than words in this area?

Previous Post: « Why Don’t You Get a MacBook?
Next Post: Book Review: A Memory Worth Dying For »