This week’s challenge topic is “How My Family Survives My Writing.”

Survives.  It’s a good choice of words.  I think it’s true of any job. It can take over your life at times.  The real estate agent who needs just “one more showing” to get that sale, the doctor who just makes one more round to check on that one patient, the cop who never lets a case go.  The guy putting in double hours at the office, the homemaker who is more concerned with a Pinterest-ready house and life than the people it’s supposed to serve.

And the author who gets so lost in her imaginary word that she forgets the real one. Oh, yeah.  And the family eats delivery pizza. 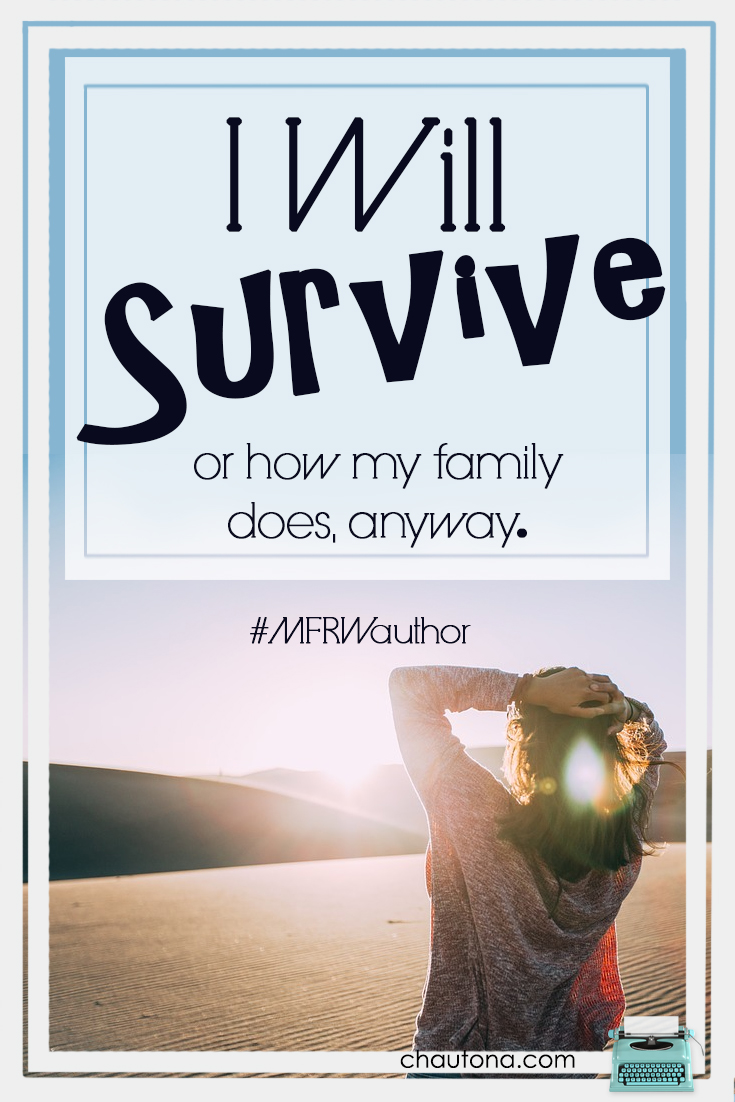 When I first started writing, it wasn’t such a big deal.  After all, I was just writing a few words here and there, and they added up.  And then I got sick.   It started with being unable to sleep in bed.  I gave up and rested in a recliner.  Our bathroom was about twelve feet from that recliner.  By the time I walked back and forth to it, I was out of breath, heart racing, woozy.

The doctor sent me to a cardiologist. For months, I sat in that chair under orders not to strain/stress myself.  My husband bought me a tiny sewing machine so I could sew while sitting in the recliner.  I did it, too.

But I also wrote. a lot.

Echocardiograms, take home EKGs. the works. But when they gave me a pharmacological stress test, we discovered my problem. “Asthma with an atypical presentation.”  Apparently, I’ve had it my whole life. Who knew that everyone’s lungs don’t ache for days after going swimming?  Who knew that the reason I passed out on P.E. runs in high school wasn’t the sun but the lungs? Not me!

But with that bizarre episode that seemed to last forever came a sleep cycle that refused to reset to normal.  Ever since then, I’ve been awake while most in my world is asleep.

You’d think I would have adjusted in nine years.

So remembering to cook dinner?  Well, I would.  Really, I would!  If I was awake more than a couple of hours before time to start!

So how does the family survive?

It helps if you’re a bit crazy.  When you grow up in a family of half-crazed idiocy, Mom forgetting dinner is the least of their worries.  Don’t believe me?  Well, how many families do you know who “dust the ceiling fan” by throwing lightweight, small stuffed animals and/or balled up socks up into it.  Turns them into projectiles.  And the dust bunnies drop.

How many kids do you know whose fathers “wrote” Christmas parodies about eating Christmas trees and changing Christmas lights… bulbs?  And… um…. well, turned a song about not knowing why someone loves someone… into a domestic abuse ballad.  (Hey, at least the guy is in jail by the end–and the gal didn’t pay bail! GOOD FOR HER!)

How many mothers escape to a hotel when the flu runs through the house?  Yeah.  I’ve been known to do that a time or two. It’s actually a kindness.  I don’t do so well with the vomit stuff, and it actually saves my husband a LOT of mess clean up.  Just hearing, seeing, smelling–even knowing it’s a possibility is often all it takes for my body to revolt.

Like I said. We’re already weird, and that does help one survive this craziness called writing.

But, I think what helps most, is that despite the odd hours, despite the messed up mom, despite it all… my family knows where to find me, and they’re not afraid to do it.  Several times a day someone comes in while I’m working and shares a movie they just saw, asks what I think about climate change, tells me about an issue with a coworker, shares a really bad joke, asks what we’re having for dinner…

Okay, that one EVERYONE asks.  It’s like I’ve become my Aunt Susan and they’re warding off my version of the “Aunt Susan Minute.”

It went like this.  I had an Aunt Susan (shocker, I know).  She had three boys.  My cousins, Johnny, Michael, and Scott.  We’d be in one of the bedrooms, and the ritual would begin. Four o’clock would hit and Johnny would stand, stretch his obscenely long legs, and mosey on out to where the adults were chatting.  “Mom, when’s dinner?”

Five o’clock came.  Michael would stand, stretch, and shuffle on out to the living room. “Mom, when’s dinner?”

Six o’clock came.  Time for the big guns.  The littlest kid with the big ears and adorable smile.  He’d hop up, dash to the door, and race down the hall.  “Mom! When’s dinner!  We’re STARVING.”

By seven-thirty or eight, it was time to put an end to this thing. (and this is why we learned to start at four! Originally, we were silly enough to start at six!  EEEP!)  I hated my part.  I guess because I didn’t like feeling …. “demanding.”

But I’d slink out, give my mom an embarrassed grimace, and wait for Aunt Susan to acknowledge me.  “Need something, sweetie?”

By this point, I’d be determined not to annoy, so I’d say, “Um, we were wondering if there was anything we could do to help get dinner going?”

Mom would snicker.  Aunt Susan would get up.  “It’ll be ready in a minute.”

And that time it would.

And for MY kids, “What’s for Dinner?” is the same plan.

It translates, “Don’t forget that most humans eat at regular intervals!”

But mostly, I think that my family survives because I am on such a weird sleep schedule. Now and then, while on trips, I get onto normal people sleeping habits.  I can keep it up for about a week. Then I crash.  I think I’m stuck with these hours.  And really, that works for me.  Because I get to be my most productive while my family is “unconscious.”  😉

Previous Post: « A Few of My Favorite Things: #MFRWauthor
Next Post: Kaye Is a Fraud: Where Kaye’s Clutter Hides »