Liz Johnson’s Red Door Inn was one of my favorite books of 2016.  So, when I heard that the next book was releasing this fall, I knew I HAD to get it, and Liz was gracious enough to send me one (and a gorgeous PEI ornament as well!).  Where Two Hearts Meet might even be a better book than the first. I love it when an author does that.  So often, the middle book of a trilogy (or more) is a bit lackluster.  This is not true of Where Two Hearts Meet. 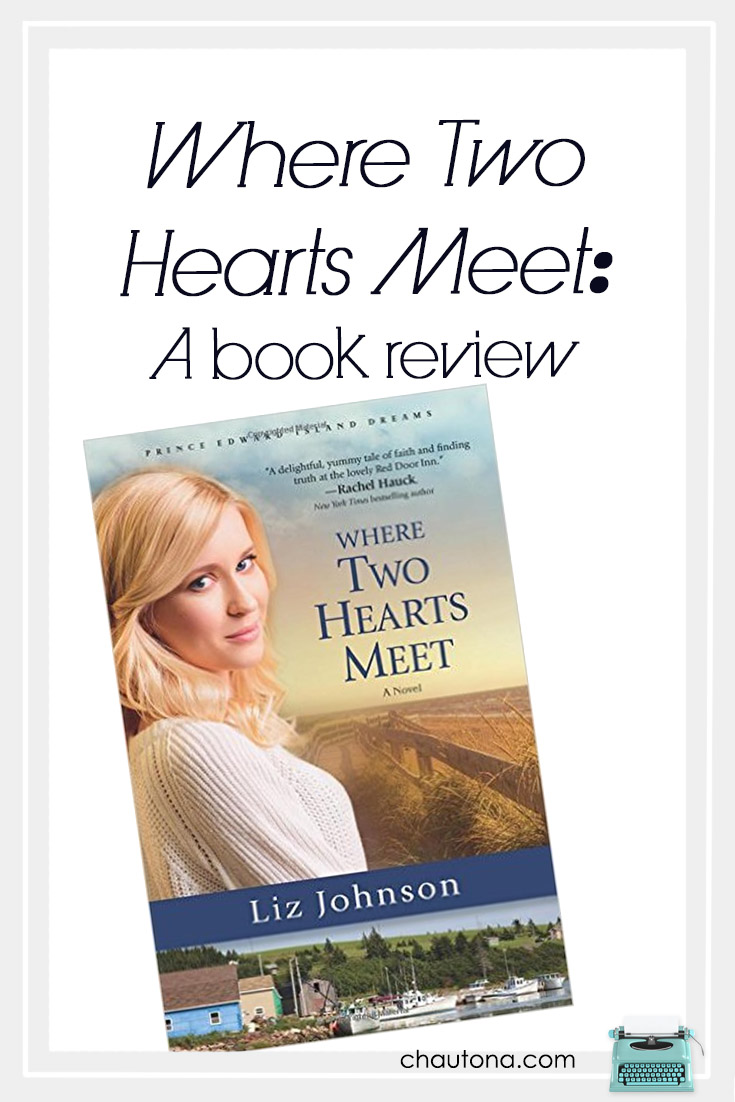 Note: links in this post may be affiliate links and will provide me with a tiny commission at no extra cost to you. Thanks for the infusion to the Denny’s fund!

In her kitchen at the Red Door Inn, executive chef Caden Holt is calm, collected, and competent. But when her boss asks her to show off their beautiful island to impress a visiting travel writer and save the inn, Caden is forced to face a world much bigger than her kitchen–and a man who makes her wish she was beautiful.

Journalist Adam Jacobs is on a forced sabbatical on Prince Edward Island. He’s also on assignment to uncover a story. Instead he’s falling in love with the island’s red shores and Caden’s sweets.

When Caden discovers Adam isn’t who she thought he was, she realizes that the article he’s writing could do more than ruin the inn’s chances for survival–it might also break her heart.

Readers will discover hope for the hurting, joy for the broken, and romance for the lonely at the enchanting Red Door Inn.

So… what’s up with Where Two Hearts Meet?

Can I just say that it was beautiful to read of a young woman who isn’t model perfect?  When almost all American women are over size 2, it’s nice to see someone as a character who is definitely in the double size digits.  And I loved her showing what I’ve heard men say often—that a woman who is curvy is just as attractive as one who is thin.

Adam’s character appealed to me for similar reasons. He’s flawed. He’s attractive, but through her eyes.  I can’t even remember if there was a description of him that made me think he is or not.  I see him through her eyes and through his self-perception. He’s dealing with some seriously deep and horrible issues that add richness and depth to the story.

But that’s not all!

The supporting characters in this book are richer than we often get.  I loved the couple staying at the inn and how they helped Adam work through things. Their backstory made me laugh and want to cry, both.  Speaking of laughter, one of the best elements was the humor that Johnson interjected at perfectly timed intervals.

Yes, if you’ve noticed, I’m having a hard time avoiding spoilers!!!  I can’t say much more than that I loved this book. It’s almost the best that I read in 2016. I highly recommend the book to lovers of Christian romance.

I italicized that for a reason. If I have one complaint about this book it’s part of the romantic element. It’s not that it isn’t realistic or believable.  It is. But there was at least one scene, possibly two, that I found um… very well described.  Ahem. I know that there’s a fine line between writing realistic fiction that shows who we are, how our perceptions can skew reality, how God created us, and how we live that as Christians… and writing what merely stirs emotions and such. I think that line is going to be very different for people and this book may cross it for some. Just a heads-up there!

Even with the slight discomfort with the physical affection, the story was so good and most people probably wouldn’t be bothered by it, so I’m giving this five full stars.  Can’t WAIT for the next one, On Love’s Gentle Shore.

Liz Johnson has a terrible habit of sending me books to review that, upon receipt, send my heart racing and beads of despair (otherwise known as perspiration) across my forehead. It all started with The Kidnapping of Kenzie Thorn. In that book, someone is kidnapped for her own good.  Sound familiar?  I read that book with more dread than excitement at first.  It turned out to be nothing like the book I’d just finished.  Justified Means.  Then I read the Red Door Inn. Again, one element in there was so similar (and yet so different) from something I’d planned, that I immediately sent Liz an email and said, “You’ve done it again.”  We agreed that while there’s a similar element to it, Liz’s book and mine were vastly different. This book, it happened again—but kind of in reverse.

In Caden, I saw a lot of Grace from Noble Pursuits. The aloneness and yet surrounded by friends. The culinary bent. The lack of “perfection” by the world’s body standards.  But where Grace was reasonably confident in her choices and her life (if a bit overly freaked-out about mice), concern for others, even more than herself, makes Caden a bit insecure.  And that was kind of a nice reason for someone to be insecure, you know?  Anyway.  Thought you might enjoy that.

Sharon Q!  Thanks for participating all!

Previous Post: « What’s Christmas Fiction? (And why do I write it?)
Next Post: New Year= New Book! It’s Release Day! »