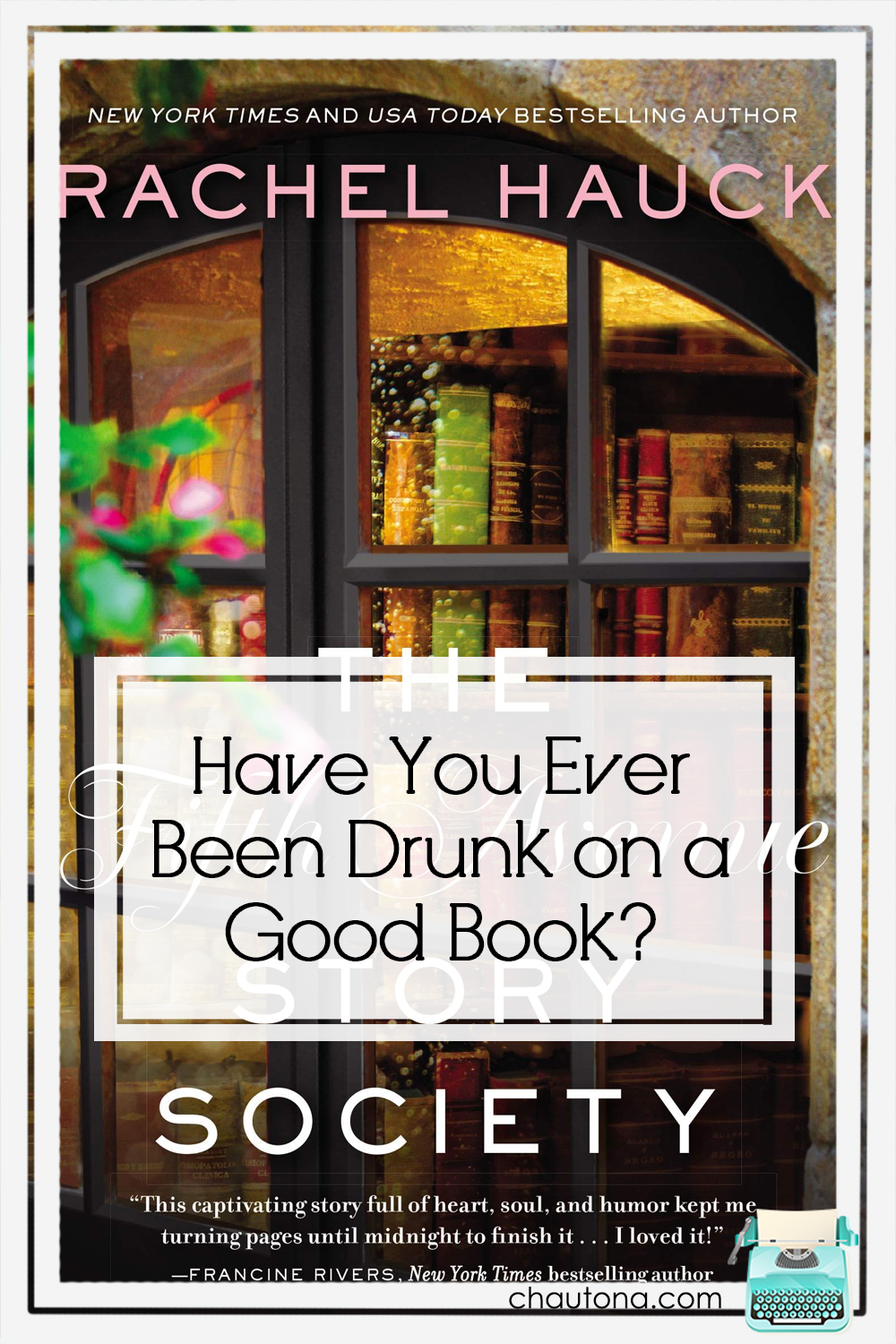 I understood the man in the book—Ed. I understood everything about him. And, in fact, I really thought I’d write all about him alone, but then I started thinking about Jett. It occurred to me that I really understood him, too. How could I relate so well to two so very different people.

Then there was Lexa. That warped psyche and all the reasons behind it. Yep. Totally me.

The funny thing is, Chuck. I was sure that he was the only one of the group I absolutely couldn’t see any of me in. Apparently, I’m an idiot. Or maybe it’s just that some things are harder to see the root cause of. Maybe some things hit a little too close to home so you grab onto the literal. I’m not violent! I…

But more than anything, I got Cora. Her secret dug deep into my heart and whispered hope and healing even as the other characters ripped off scabs and watched those scabs bleed.

All from a book I didn’t have time to read—didn’t know if I wanted to read. The Fifth Avenue Story Society

Note: Links may be affiliate links that provide me with a small commission at no extra expense to you.  Additionally, I requested and received a free review copy of the book. Of course, I just say it like it is regardless of how I got the book.

Have You Ever Been Drunk on a Good Book?

I’m not sure what else to call the mind-numbing stupor that has taken over me in the hours after finishing this book. The only reason I’m writing the review now is that I’m afraid I’ll forget some of the things I want to say.

This is only my second Rachel Hauck book, and while I really enjoyed the first, I was kind of afraid to read another. Too often first books by over-recommended authors are um… disappointing at best.

I’m so grateful that this book was not that book

Instead, The Fifth Avenue Story Society is probably going to sit on the top of my favorites of 2020… maybe of all time. I haven’t related so thoroughly and so deeply with a character since I “met” Francie Nolan from A Tree Grows in Brooklyn back when I was twelve.

Except that in this book, I related to all five of the principal characters. Each of them represented a part of who I am and oddly enough, are nothing like me at the same time. I want so much to discuss and investigate those deeper insights, but I can’t. If I attempt that, I’ll be dumping spoilers all over the place. Not a good idea, you know?

Instead, I’ll say that brilliant characterization, an intricate plot that never once felt convoluted or kludgy, and slow, subtle unveilings of spiritual truths combine to create a story that I know I’ll reread probably once a year. The subtlety of the spiritual content hovered on the edge of “hidden” for quite a while, but in the end, Hauck added only what readers needed for this story’s purpose. No more. Seriously brilliant.

In the whole book, I have only one objection that I can recall.

Those who know me will not be surprised that I was bothered by one character hearing the audible voice of God speaking to her. My understanding of Scripture doesn’t allow for that, so I mention it only because I know it is an issue for some people (like me!).

Still, it wasn’t used as a crutch of a plot device, so I chose to look at it as a difference of theological opinion and to move past.

Look, I might read this book in six months and wonder why I raved about lit like I am (doubt that), but as of right now, today, it touched me, laid open things I needed to read and see within myself, and offered hope and healing for wounds I didn’t know I had.

If that’s not a brilliant book, I don’t know what is.

Recommended for lovers of solid Christian fiction that doesn’t preach but does offer spiritual insight. Furthermore, those who love excellent psychological women’s fiction without preachiness will find Rachel Hauck’s novel a welcome relief after so many offerings that only weigh down and use pretentiousness to hide bad writing.

One other thing The Fifth Avenue Story Society did is to plant Rachel Hauck on my “just buy it” list of authors I don’t hesitate to purchase when I see one I don’t have. Looking at the list in the front of this book, my bank account is about to get a workout. Sure am glad I requested a free review copy of this one!

The Fifth Avenue Story Society is on tour with Celebrate Lit 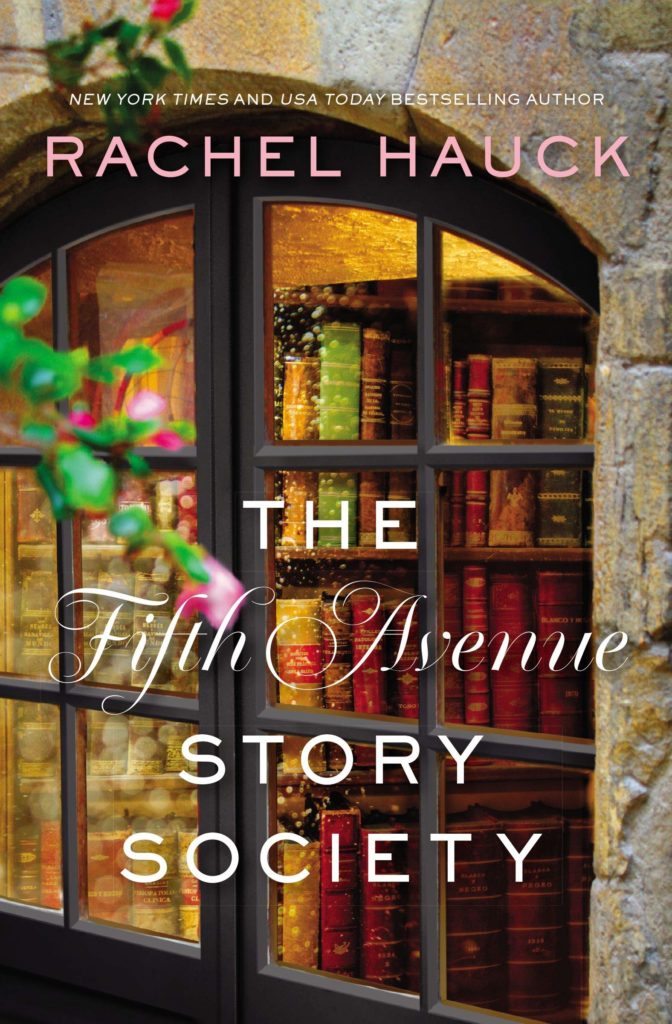 An invitation to join The Fifth Avenue Story Society gives five New York strangers a chance to rewrite their own stories.

Executive assistant Lexa is eager for a much-deserved promotion, but her boss is determined to keep her underemployed.

Literature professor Jett is dealing with a broken heart, as well as a nagging suspicion his literary idol, Gordon Phipps Roth, might be a fraud.

Aging widower Ed is eager to write the true story of his incredible marriage.

Coral, queen of the cosmetics industry, has broken her engagement and is on the verge of losing her great grandmother’s multimillion-dollar empire.

When all five New Yorkers receive an anonymous, mysterious invitation to The Fifth Avenue Story Society, they suspect they’re victims of a practical joke. No one knows who sent the invitations or why. No one has heard of the literary society. And no one is prepared to bear their deepest secrets to a roomful of strangers.

Yet curiosity and loneliness bring them back week after week to the old library. And it’s there they discover the stories of their hearts, and the kind of friendship and love that heals their souls.

Rachel Hauck is the New York Times, Wall Street Journal, and USA TODAY bestselling author of The Wedding Dress, which was also named Inspirational Novel of the Year by Romantic Times and was a RITA finalist. Rachel lives in central Florida with her husband and pet and writes from her ivory tower. Visit her online at:
RachelHauck.com
Facebook: RachelHauck
Twitter: @RachelHauck
Instagram: @rachelhauck.

Read an Excerpt of The Fifth Avenue Story Society

The Power of Words, February 11

For Him and My Family, February 13

The Meanderings of a Bookworm, February 13

Inside the Wong Mind, February 17

Through the fire blogs, February 18

Spoken from the Heart, February 19

She Lives to Read, February 20

By The Book, February 20

For The Love of Books, February 21

A Good Book and Cup of Tea, February 22

To Everything There Is A Season, February 22

Lights in a Dark World, February 23

*No Giveaway for this Celebration Tour