“Have you read this book?”

The question is asked with the confidence that the answer would be in the affirmative.  I mean, anyone with any sense has read it, right?

All it takes is a shake of my head for the reaction.

“What?!”  Suspicion furrows a brow and narrows eyes.  Lips purse. Then understanding appears to dawn. “Oh, well you’ve got to read it.  It’s like *insert name of another book by Rachel Hauck* but I think it was even better.  Do you like that one or this other one best?”

It’s time to put us both out of our miseries. “No… I’ve never read anything by her.”

Suddenly, my space at the cool kid’s table is revoked, I’m relegated to the corner where the sketchy kids who do terrible things and are sooo not cool live.  I’m not surprised, by the way.  I was never one of the “cool kids.”

Still, peer pressure doesn’t disappear the day you step out of junior high or high school. And yes, at forty-eight years old, I’m subject to its lure.  The book appeared as available for review. The Memory House.  I read the synopsis and clicked on the request form.  Then I saw the name.

At that point, I did the only sensible thing I could think of.  I asked a friend if I’d like Rachel Hauck’s books.  We’re still friends… barely.  Now that I’ve read something by Ms. Hauck, I have hopes for retaining that friendship.

I have to confess though… even after the book arrived and I reread the synopsis again… after all of it, I couldn’t help but wonder… 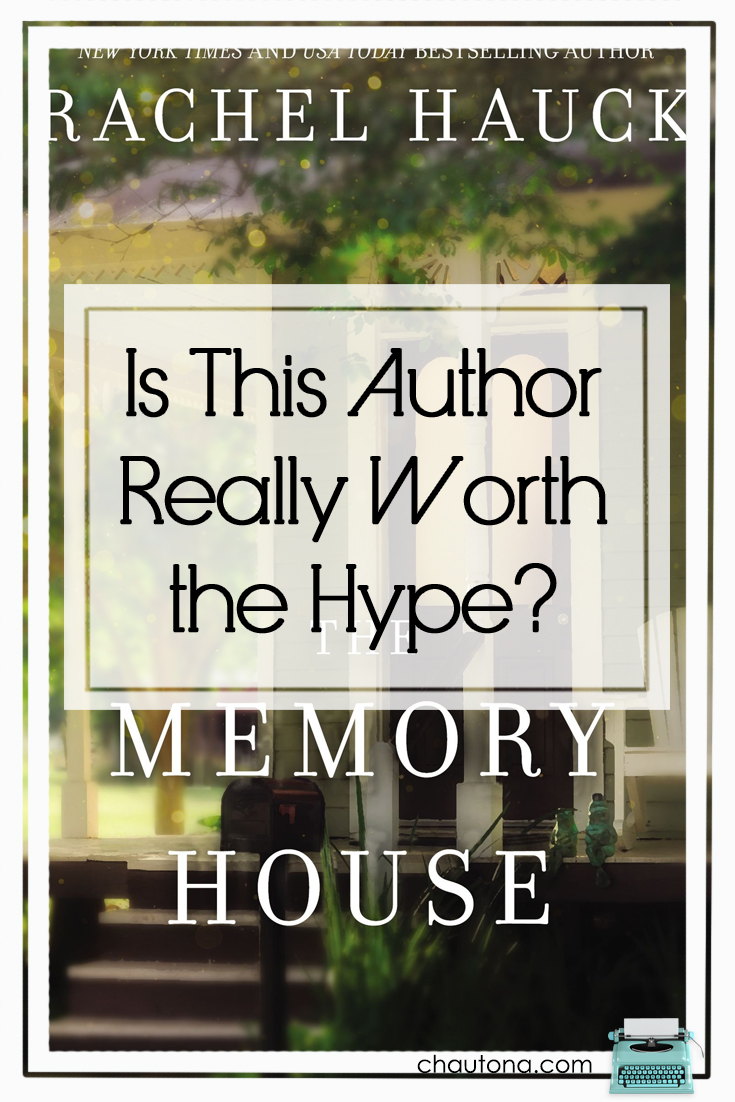 Note: links may be affiliate links that provide me with a small commission at no extra expense to you.  Additionally, I requested a review copy of this book and chose to share what I thought of it.

Is This Author Really Worth the Hype?

I’ve been burned by authors before—lexical artists who lured me in with reputations of brilliance and skill that left me scratching my head much like I might at many modernist art exhibits.

A few things became apparent right away.  First, Rachel Hauck is a brilliant writer.  With just one horrible line from a criminal, she managed to make you both despise that person even more and care about an NYC cop and the dog she found.

Additionally, she is a master of characterization.  Somehow the author took a prickly, self-absorbed, and broken character and made me like her by the end of the book

But even more than those, I think the way she restrained herself in so many instances is exactly what made her shine brightest. For a woman who can wield a pen like nobody’s business, she didn’t overdo it—not even once.

One of my biggest pet peeves is “declaration scenes.”  You know, those moments where one or both of the main characters profess their undying love for the other.  Nine times out of ten… or maybe ninety-nine out of a hundred, I snicker.  They’re sooooooo purply and overdone.

Ms. Hauck, on the other hand, knows how to write a declaration scene.  With skillful use of the fewest words possible, she turned it on its head.  Seriously—one of the best “declaration scenes” ever.  I swooned, people, and I don’t swoon.  The line?

I think you just told me you love me.”

Gaaah all the feels because it’s so REAL

That takes me to another part I loved: dialogue

I adore dialogue that reads as you’d really hear people speak without all the “ums” and “uuuhs.”  Hauck knows when to put those things in to add to the pacing, the tension, the story.

Warning: pet lovers… what the dude I referred to up there said is horrific.  Just one nasty line without a single foul word.  It wasn’t needed.  And with it, the entire tone of the book takes off. Brilliant.  And horrible.

That said, there were a couple of places… just a couple of minor ones where things were a tad… off.  I guess that’s what I’m trying to say.  Oh, and there was one really unfortunate choice of wording.  From the context, I didn’t get that the author was actually meaning the word in a sexual way (as it is usually used) but because of the circumstances, it could easily be taken to mean something sexually unacceptable.

If you read the book and you come to a discussion of parents for a child.  Just note that I really don’t think the author meant for the character to say anything of a sexual nature… it was just a word choice to show three people working together on something.

I love me some flawed characters, and Rachel Hauck did not disappoint.

Every character (but one, I suppose) had realistic flaws that created tangles for the story that the author then had to unravel for us.  Look, this is a realistic book.  The unsaved act like it.  We’ve got a woman who is pregnant with a married man’s child, a mother lying to her child, another hiding things from her child, and a verbally abusive father.  That’s just the beginning of things.

I’ll be honest. I think if anyone else with less skill had written this book, it might have come off as a bad soap opera.  Seriously.  It should have.  It just worked, somehow.

I loved both the intertwined, dual-timeline plots and the way the author crafts a scene.  Seriously, this book is worth the read just for the scene where Everleigh buys a car.  I cracked up through the whole thing.

I’m not sure of the usual spiritual content in Ms. Hauck’s books—are they fluffy… spiritually deep… something in between?  I don’t know.  In The Memory House, I found beautiful and important spiritual truths woven through the story.  Sometimes, the other layers almost hide those truths, and maybe a little too much, but it is so beautifully done that I really couldn’t complain.

Because those truths are there.  God is with us, He’s working in and for us.  He’s in the business of redemptive change in the lives of people who will surrender.

So… we’re back at the original question.

Are Rachel Hauck’s books worth the hype? Well, I don’t know about the others, but if they’re half as good as this one, I’d say so!

Look, I don’t think it’ll make my top ten of the year, but I read a boatload of books!  It did, however, put her on my top ten “must get another book by her” list.  Very few authors make that list.

Recommended for readers who aren’t looking for perfect people living perfect lives. Also a good choice for readers who appreciate well-constructed stories and sentences that don’t read as though they’ve been “worked over.”

All in all, I say this is a beautifully written book with rich themes, tough stories, and a magnificent thread of redemption no storm can break.

Previous Post: « 4 Purposeful Ways You Can Change Your Life
Next Post: The Best Tips on How to Select YA for Your Teen »