As a child, I sat mesmerized by the pendulum on the grandfather clock my Uncle Oscar made for Grandma. My father talked about the cool crank used to wind it and how the weights would drop lower and lower every day until day seven when it had to be rewound or it would stop.  Then, he’d start singing, “Ninety years without slumbering, tick, tick, tick.  Life’s seconds numbering tick, tick, tick.  But it stopped, short, never to go again when the old man died.” (Henry Clay Work).

Yes, we sang songs for everything when I was a kid.  If someone did something a bit loony, we’d sing, “Crazy…”  Or, if anyone ever mentioned the word “swing” at all, we’d sing: “England swings like a pendulum do. Bobbies on bicycles two by two…” Yeah.  A song for every occasion and for every occasion, a song.  But that’s not explaining what pendulums have to do with anything.  Well, except that I kind of like that word.  Pendulum.  It has a nice ring to it.  Which is  kind of funny when you consider that one of those clock weights drives the chimes.  I digress. 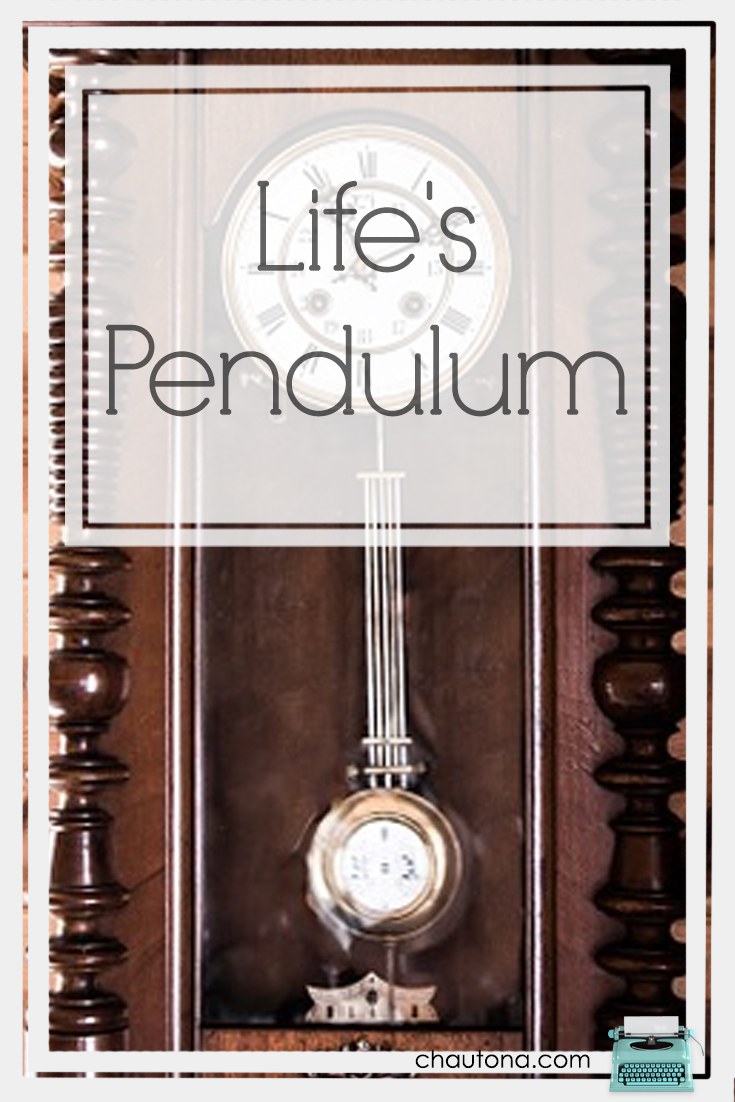 (Note: links in this post may be affiliate links and as such, I may receive a small commission at no extra expense to you)

So, what is the big deal about the pendulum effect?

Glad you asked.  Or rather, in case you didn’t, I asked for you.  I’m helpful that way.  *whistles*

It’s just that, as people, we’re prone to what I call “the pendulum effect.”  Janie Doesky has been spending too much money as of late.  She looks at her bank accounts online and freaks out at the excessive spending and waste.  Does she settle down and make a wise spending plan?  Some do. I won’t pretend they don’t.  But a common reaction is for people to cut up credit cards, withdraw 20.00 in cash and decide that’s all she can spend for the month.  On the 4th of the month, of course.

Or, like Kaye, she sees that she has six melon ballers and decides to get rid of all of them.  After all, a spoon does the same job.  Oh, and out go the cookie and ice cream scoops.  People used spoons for centuries and so can she!  She had been waaaaaaaaaay over to the right of the clock, but instead of coming to a balanced middle-of-the-clock, she hangs on and swings all the way over to the left.  Or vice versa. It happens all the time.

I’ve seen it in homeschooling, where a mom started with hyper intentions and realized that three weeks in, they were already burned out.  So, instead of deciding that marine biology might not be essential for a kindergartner in the Midwest, she throws all books to the wind and tells them to explore their environment…. until they’re about seventeen and a half and then goes, “AAAK!  okay, you’re going to do 8 years in one.  Get cracking.  I want that Algebra book done by the end of the week.”

Kid stares at mom and says, “Why are there letters in my math book? And is this like plusses or takeaways?”  (exaggerated to make a point)

So, of course, when I started working on Cassie in The Vintage Wren, I realized I had another Kaye–different reason, different problem, different personality, same result.  An extreme response to a simple solution to a common problem.

You know, I’m not writing this book to make a point about anything, really.  I’m not here to try to convince people that they shouldn’t buy anything with packaging, shouldn’t have trash service, and shouldn’t enjoy a can of Coke (which is the only way to enjoy one, btw.)  See! 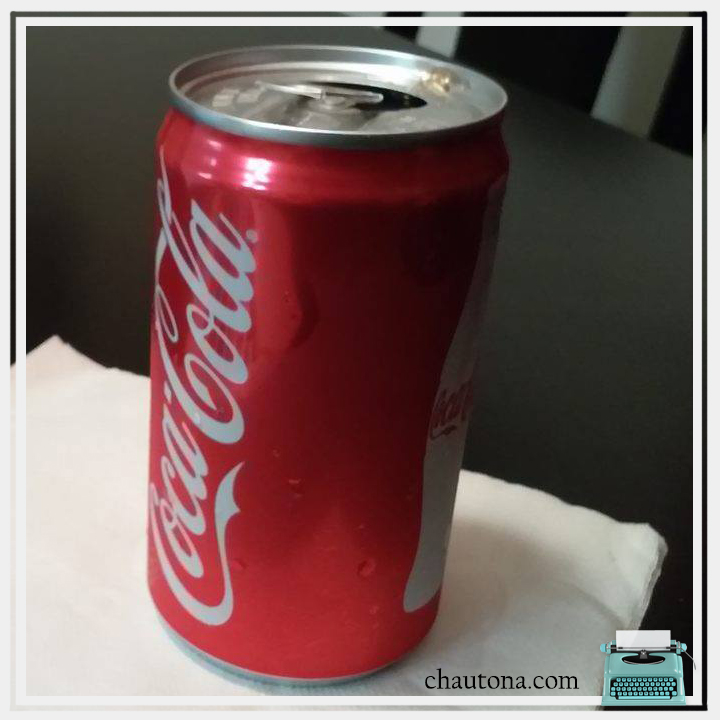 So why am I writing it?

Well, because you see it’s about people.  And there are people out there who are passionate about not using straws, about having a “zero-waste” life.  I didn’t really “get” the passion.  Or the driving concern.  And, I couldn’t understand why someone would choose to avoid a really great Viva paper towel (I do love that brand).

I’ve said it before, but I often feel the urge to repeat it.  The characters that I write, I don’t always completely agree with.  They hold convictions I don’t, don’t hold convictions I do, they make choices I think are wrong, and convict me with their very right choices.  But as I explore these characters, I learn from them.  Will I ever become a homesteading gal like Willow, or an extreme minimalist like Kaye?  Probably not.  Me? Try for a zero waste… DAY, even?  Probably not.  Could I forgive the kind of blatant and public humiliation and the lies that Mac did in the way he did?  I don’t think so, but I’d want to.  Do I think it’s right that I have a character flirting with a relationship with an unsaved man?

Nope.  But people do these things.  And as I write about them, read about them, examine them, I learn.  I take their actions to the Word and I explore them there. Look, I may never change my mind… or I might.  But the point for me is to learn.

It’s why I write.

I don’t write these characters as models to imitate in every way.  But I always try to show something in them that you should.  The point is for you to discern what that is for yourself.  I’m not writing moralistic drivel to spoon-feed values into you so you can regurgitate the right response.  I’m trying to “stimulate [you] to [demonstrate] love and good deeds” and sometimes that’s going to mean doing the opposite of a character because you saw in that person what you know the Lord doesn’t want from you.

And sometimes I’m just showing what I see in life and learning to appreciate “the other side” a bit.  With Cassie, I have a whole cast of characters.  They make me think, they are on all points of that pendulum swing.  Some are far to the right and others to the left.  Some are nicely balanced, and others vary in the extreme.

Cassie:  A bit sarcastic, definitely extreme when challenged and has a strong, competitive spirit. But she’s caring, loving, and generally comfortable in her own skin. She has a tendency to manipulate things or let you think things happened or will and then confess.  I like her.  I think she’d make me tired in person, but I like her.

Lauren:  If Cassie is impulsive and impetuous, Lauren is her balance.  In fact, Lauren is a fairly well-balanced character.  So I find it really fun that she does something out of character and totally off balance.  Because, as humans, we’re like that, aren’t we? We all have some out of character quirk that keeps us from being dull.

Joel:  Aaah… Joel.  To be honest, I didn’t think I’d like him.  He’s stealing the show.  I get emails demanding that I not break his heart.  OOPS!  He handles Cassie’s extremes very well and yet isn’t just a pushover.  That’s a nice combination right there.  Too bad she can’t see it. Evan:  I didn’t expect to like Evan, either, but I did.  No matter how hard I try to make him kind of a jerk about his lack of understanding regarding the whole eco-thing.  He just refuses.  And maybe that’ll be better in the long run.  He’s a bit more intense than Joel–driven.  But maybe that’s what gives him an edge, you know?

Marla:  So far, she’s just a mom.  A cool mom, but a mom.  I want to make her a bit more like the Marla in my life, but it never works.  And now I think it might be too late. She’s already done something that probably kills that personality trait.  Sigh.  Oh, well.

Grandma: Yeah.  She’s gonna be something else.  And that’s all I’m sayin’.

There you have it!  The cast of Cassie and Co.  Except for Think.  But that’s for another week.

Previous Post: « The Family Storyteller (and it isn’t who I thought it was!)
Next Post: Art or Fan-Fiction? Does It Matter? »

One of my favorite ornaments. What's yours?