If you said those words to me as a child, I would have immediately thought of one man–Grandpa Fullerton.  The man was a genius with words.  Now, honestly, when he began telling a story, there was a good chance you’d hear the “what should have happened” mingled with what the “did” happen.  As most storytellers do, he found himself almost unable to stick to bare facts sometimes.  And we all knew it.  I guess that means it was an “unwritten” understanding or something.  Doesn’t matter to me.  There was little more that I loved more than when Grandpa told  a story. 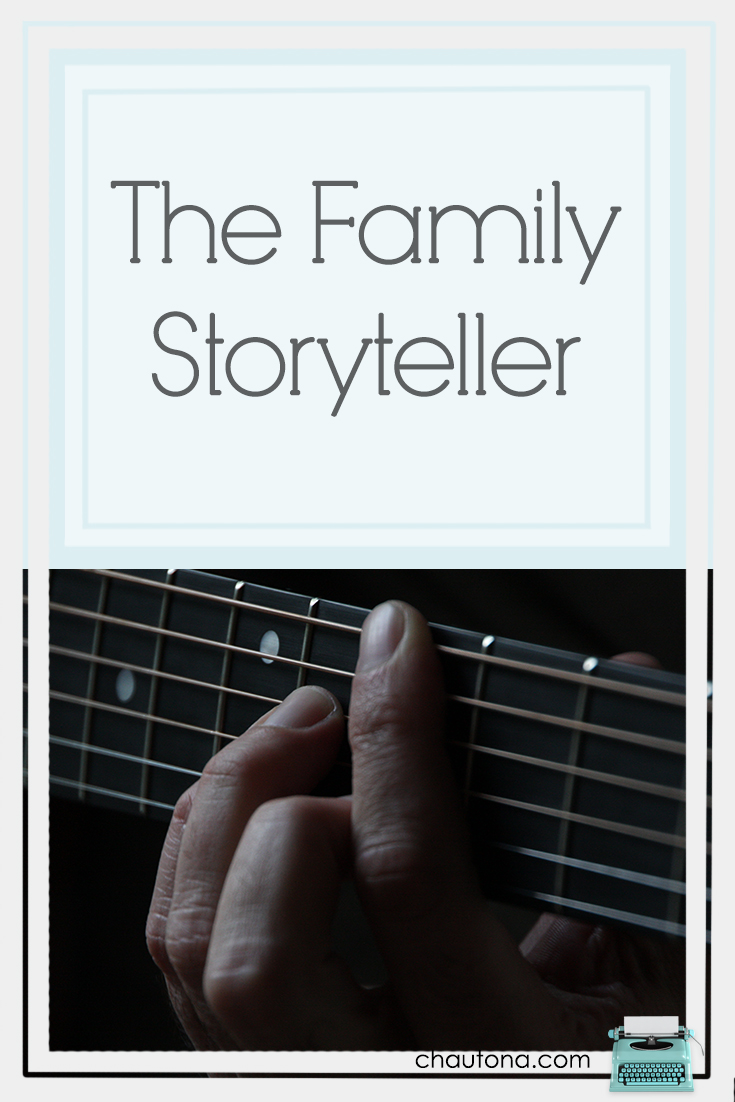 But one thing I definitely loved more was when my dad did.  Dad had that rare talent of being able to tell the exact truth with such care and precision that it didn’t need varnish.  He smoothed the rough edges but left those edges there.  I guess you could say that Dad got a little “edgy” when he told a story.

In this way, Dad was like the greatest Storyteller of all time: Jesus.

I learned from Dad’s stories.  Although most were anecdotes from his life, occasionally he’d create an illustration that morphed into a story.  The earliest of these that I remember was when I was about four-years-old. To be brutally honest, I don’t recall what inspired it, and I suspect that I don’t want to.  I can see our living room in Fillmore, California as clearly as if I’d never left it.  We lived on Mountain View Street across from the elementary school.   There was an end table next to the couch and right beside the front door.  That is where my first story lesson began.

I must have either disobeyed or been appalled at my cousin’s disobedience (I often was–quite the self-righteous little twit even then!).  Dad hunkered down on his heels and tried to explain the difference between defiance and disobedience.  He pointed to the lamp and said, “Chautona….” Let me pause for a minute.  The day I realize I’ll never hear my father say my name on this planet is going to be one of the worst days of my life.  With one, three-syllable word, my father can convey pride, dismay, shame, rebuke, love, joy…. I’ve never heard anyone be able to express himself with many different emotions more than Dad when he speaks my name.

Okay, back to the story about Dad’s story.  So he said, “Chautona, (sigh) if I tell you not to touch this lamp, you know you aren’t supposed to.  But if you walk away, go play for a while and come back, forget, and then touch the lamp, that’s disobedience.  Yes, you didn’t obey.  But you forgot.  And forgetting makes it disobedience.  You’re still not supposed to touch the lamp.  Period. You still have to take responsibility for that.”  (Yes, my father spoke with a rather varied and strong vocabulary.  The first words I remember hearing were, “Slow down and enunciate.”  I knew what that meant by 2 years old.  I had kids in high school who didn’t know what enunciate meant.)

Then Dad gave another scenario.

Just a simple explanation of two related but distinct words, but it made such a huge impression on me that I’ve never forgotten it. Through Dad’s stories, I learned how to choose when to “tell” on someone (almost never) and when not to–and why.  I learned how to respect people I had found unrespectable.

Through those stories, I learned to understand the value of story.

Dad also used a different form of storytelling to teach me.  Seated on Uncle Lon’s hearth in Camarillo or a kitchen chair in Grandma’s apartment on Osborn, he’d pull his guitar from the pink flannel cover Grandma had made for it years earlier, and he’d play.  He sang old ballads like “Bonnie  Black Bess.”

When Dad played that song, you could hear the hoofbeats on the road to London–hoofbeats that would save Dick Turpin’s life and cost his horse, Bess, hers.  My throat would ache with the heartbreak of it all.  He’d sing of a blind child aching with the loss of her mother and the realization that a new mama was coming to their home.  I remember wondering how he could sing of her gravestone that read, “There’ll be no blind ones there.”  The first dozen times I attempted to sing it for myself, my voice cracked and broke trying to get through the last couple of verses.

He sang happier ones, of course.  “Concert Garden.”  I loved the story of a young man who left his friends to go home because “Somebody’s waiting for me. Somebody loves me I know.  Somebody’s wond’rin’ where I can be and what can be keeping me so.  Somebody’s heart is sad and waiting so anxiously.  There’s a light shining bright in a window tonight.  ‘Cause somebody’s waiting for me.”  He’s teased about his sweetheart, so he brings his friends home and points through the window where an old woman is praying.  He says, “She’s my mother, she’s my sweetheart, she’s the one I meant tonight….”

Those songs taught me values through their stories.

But I admit, I loved the heart-rending tales of songs like “Tragic Romance” and the typical romance of “California Joe” equally well. Those ballad writers–they were storytellers too.  And through those heart-wrenchers, I learned how to sympathize, how to “weep with those who weep.”  Through them, I learned that life is full of terribly painful moments, but we don’t live them alone.  Others have borne them and can help us thorugh it.  And in our turn, we will help others.

I had three songs I held in rotation.  I tried to be careful not to ask for each one too often.  “Blind Child’s Prayer” I asked for most, although it wasn’t my absolute favorite.  But it had fewer verses than my true favorite, “California Joe.”  That one has twenty-six verses with eight lines to a verse.   The tune to that one was the inspiration for my own ballad in Argosy Junction.  But, if no one else asked (I could never count on Uncle Lon.  His choice was always “The Ship.”), I would always go with “Cowboy Jack.”  For some reason, Dad never balked at that one.  Maybe it was short enough.  Maybe he loved it himself.  I never knew.

But, it’s why I chose it for the first of my Ballads from the Hearth series.  I wanted a book that epitomized the love our family has for these old songs.  I took Jack’s story and then everything went crazy.  But that’s another story altogether.  Strange, isn’t it.  All my life I’ve considered my mother’s father to be the storyteller of the family, but really, my father is the one I knew and loved best.

For the words to “Cowboy Jack”, see THIS POST.

Previous Post: « It’s Not Easy Going Green: How Characters Can Irritate
Next Post: Life’s Pendulum: Why do we hop on for the ride? »