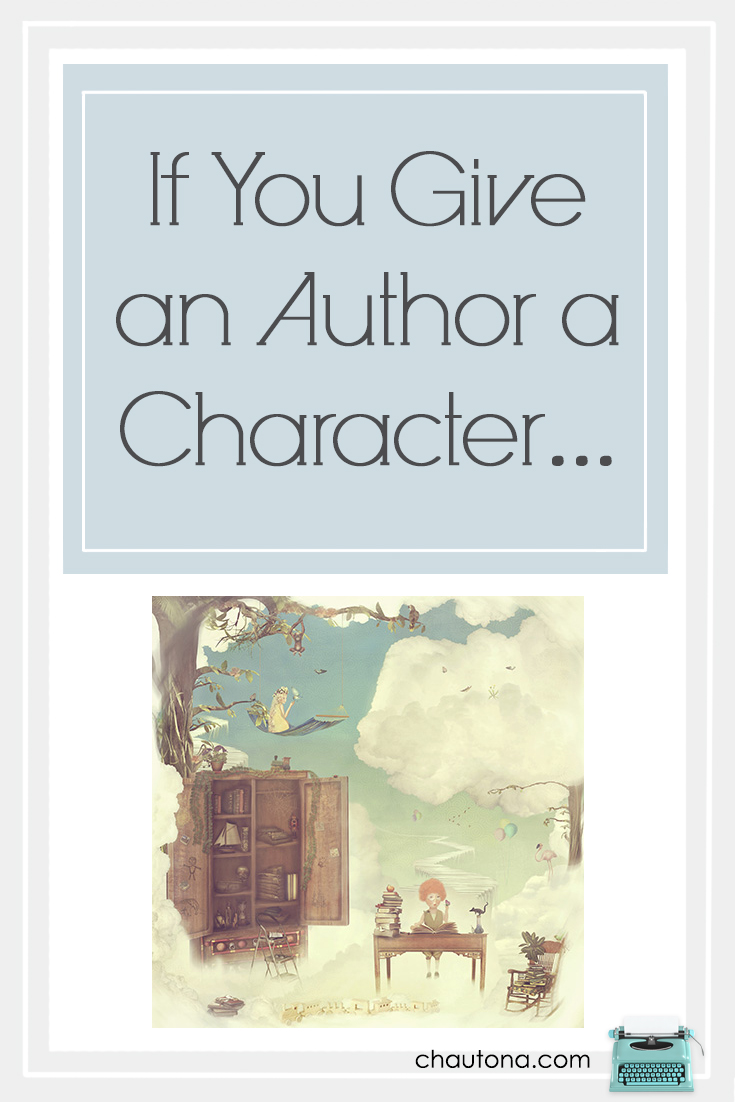 If you give an author a character,
She’s going to want a story,
When you suggest that she write the story,
She’ll probably work to make it amazing.
When she’s finished, she’ll ask you read it.
Then she’ll ask for a pen so she can make “corrections and improvements.”
With great reluctance, you’ll give her a pen.
She’ll start marking… and scribbling… and marking some more.
By the time she’s done, the manuscript will look like an obsolete, ancient hieroglyphic language.
She’ll apologize and offer to type it up for you so you can read it.
You’ll pass her a laptop.
She’ll rework every character and scene in the story–including the one you gave her.
But something will be missing.
So, she’ll ask to brainstorm.  She’ll suggest kings in palaces.
You’ll suggest pirates at sea.
She’ll create a modest girl with a gentle heart.
You’ll assure her that would be the perfect addition.
She’ll add it.  She’ll ask for more.
You’ll give her a character idea.
And chances are… if you give her a character…
She’s going to want a story to go with it.

But is it true–about characters?

If you’ve ever wondered what happens in character development–that’s about it.  Every book has at least one character I want to explore further.  In Not a Word, it was Rory.  Love that kid.  I want to see him as a teenager.  Will he still be crushing on Kenzie, or will moving him away throw him in the path of a little girl with almond eyes and dark curls that make him forget Kenzie’s red braids and freckles?  Maybe he’ll win talent shows as a comedian!  Will Mac take him to open mic nights at a club in Rockland?  Will the critics love or hate him?

In Discovering Hope, there was Kirky.  I have her story started, and I want to finish it.  It’s important to do.  Something about her appeals to me. Sometimes as a writer, I feel more like a psychologist. You know, prodding and poking into the minds and psyches of these unfortunate people who find themselves at my mercy.  *insert evil laughter here*

But the book that introduced the MOST characters who demanded their own stories was Thirty Days Hath.  **SPOILER ALERT**  If you haven’t read the book, skip the next section!

*pretend it’s The Piano Guys.  THIS is probably my favorite one of theirs.*

Allison, of course, needed something to prove she does have spark and passion.  It just took a guy with a rough past and a love for Jesus to do that whole “sparking” thing.  But what some people don’t know is that there are more books in the works featuring “Adric’s Girls.”

April gets her own story.  It even has a title (which I love).  Dead Limb Walking. You can just imagine what happens at the opening of that book.  And another book idea I had is now likely getting morphed into it.  I think my lackluster subplots just got a whole lot more interesting.  But she’s not all.  Remember Christine?  Oh, yeah.  She’s GOT to have her own book!  All that sass NEEDS an outlet. Gwen?  Maybe she meets Kim from HearthLand–at a performance, perhaps?  Maybe she opens a ballet studio in HearthLand.

Okay, maybe not.  LOL.  But what about faithless Faith or the half-crazed girl with the amazing grandpa.  What if she got HELP?  Would any guy who knew about fake suicide attempts with rose thorns really give her a chance?  These questions plague me.

And then, of course, I’m back in the endless cycle.  I’ve got a character… and I need a story to go with it.  I’ve got the story, but now I have new characters who want their stories.  And round, and round it goes.

Previous Post: « Why the Super Bowl Is Officially Evil
Next Post: Just What Is/Are Deceptive Appearances about Anyway? »