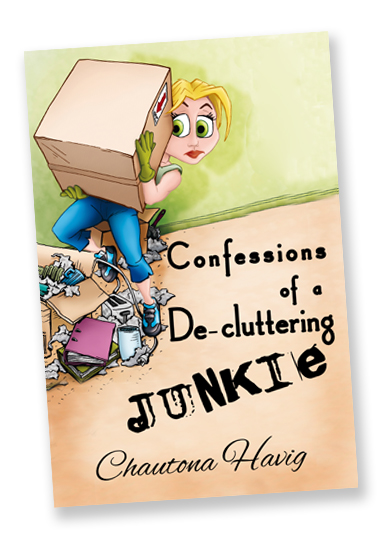 I thought it might be nice to check in with Kaye–see how she’s doing, and find out if she has had a “freak out” thing this year or not. I mean, she had one before, and it meant a whole life overhaul, right?

Chautona:  Everything all right over there?  Sounds kinda dangerous…

Chautona: I was going to ask you that question.  But I’m well.  Working on Cassie’s story. Speaking of which, Episode 2 of The Vintage Wren is now available on Amazon!

Kaye:  Whoa… I thought I was bad. When I told Jacob about her, he told me that I am not allowed to read anything on going green.  I think he meant dollars, too, but I pretended not to catch that.  Shhh… oh, and that was off record.  Don’t publish that or he might read it.

Chautona:  I make no promises.  Okay, so how goes the de-cluttered life, anyway?  Have you kept it up?

Kaye:  Surprisingly, I have.  When you called me a “junkie” you weren’t joking.  First I had a ton of junk, and then I got really into getting rid of it.  It really is like a drug fix for me. I have to be really careful.  I almost de-cluttered our tax receipts–THIS YEAR’S TAX RECEIPTS!  Jacob is speaking to me again.

Chautona:  OUCH!  I haven’t RECORDED the physical receipts, but I have done the electronic–or rather, my fabulous friend, Carmen, has.  So… what is your favorite part of being de-junked?

Kaye:  I want to say “space” but that is so vague.  What I really mean is a place for the eye to rest.  You open my cupboards and they aren’t overflowing.  There is EMPTY space between the rows of cans.  I don’t have to remove half the contents to find that ONE can of diced green chiles. My bookshelves need bookends because they aren’t squeezed in there so tightly that the shelf will fall apart if you move one.  There’s… Oh! I got it.  MARGIN.  There’s margin!  I read a book by Richard Swenson by that title.  I highly recommend it.

Chautona:  And what does the family really think?  Are they liking it or is it not so fun after all?

Kaye:  Honestly, as much as they complain, I can tell they like not being weighed down by stuff.  I just have to be careful not to overdo it.  It’s really easy for me.  Who knew that the shopping queen would end up being a budding minimalist?

Chautona:  I think we as humans are fond of extremes, so that makes sense.  So you kind of went overboard on the scrapbooking thing–didn’t have enough to work with.  Inefficient.  And Jacob didn’t like that.  How is that going for you now?

Kaye:  I did compromise on that–mostly because I wanted more stuff for planning.  That’s my new excess–or rather, it was.  I found an empty cupboard–about 24×24–and it houses everything I need for scrapbooking and planning. If it fits in there, I can have it. If not, I have to get rid of something or wait until I use stuff up.  I’m having to be very creative or go to the scrapbook store to do things that require bigger tools, because I just don’t have the room.  I DO have a Xyron, though.  Having that to glue things down was worth the space usage.  Love that thing.

Chautona: Whoa… back up.  You said “or rather, it was.”  What is your new excess thing?

Kaye:  Um… yeah.  So I found this cool budgeting software and I’ve kind of gone overboard with it. Jacob can’t decide if he’s thrilled or ready to take away the computer.  It’s hard not to go extreme when you see how much money is being wasted as you spend it. I mean, whoa!  We’re talking tons.

Chautona: So wait, you’re into budgeting now.  I mean, you like it?

Kaye: Right?  I was the one who always said, “Who needs to reconcile the accounts?  So what?  Just make sure we purchased everything and bam!  We’re done.”  But you know what?  I saved a ton of money the first time I tried because there were about eight hundred dollars worth of charges on our cards that wasn’t ours!  Boom!  Savings!

Chautona:  Yeah, that happened to me, too.  I still haven’t managed to say up with it, but we do a lot of spending around here. It really messes up things when you’re constantly trying to record stuff.

Kaye:  It took discipline, but you  know how I am. I get into stuff, and well…

Chautona:  Do you think you’ll stick with it?

Kaye:  I can’t say. I’ve done lots of crazy new things over the years, and most of them I don’t.  But I stuck with the de-cluttering, so maybe this… we’ll see.

Chautona:  Why do you think you’re so prone to being a bit excessive like this?

Kaye:  Well, I’ve always been this way a bit.  As a kid, I saved up for every Strawberry Shortcake doll that came out.  I couldn’t stand not having one.  It drove me nuts. So… yeah.  I get a bit extreme.

Chautona:  I can see that. I can be that way about books.  *whistles*

Kaye:  Look, I have to go get the boys from a party, but I want to tell your readers something.

Kaye:  You don’t have to go all out like I do to make a difference in your life.  Whether it’s time management, de-cluttering, budgeting, or even exercise. Note to everyone, that is one I will never go overboard on.  Anyway… small changes are good enough.  You don’t have to get rid of all those magazines.  You just have to get rid of the ones you know you’ll never look at again.  Think about the space you’ll have for more.  You don’t have to plan your retirement at age nineteen if you don’t want.  But do plan for your new tires–budget for them.  You won’t regret it.  It’s true of everything.  Just because some of us are extreme, doesn’t mean you have to toss the idea.  Just make it work for you.

Chautona:  Well, there you have it, folks!  One happy, budgeting, Kaye.  What next?