I had a plan for The Agency Files.  Three books.  But book three had too much happening to wrap up completely, and I had this character from another book that needed resolution. So, I decided on a fourth book.  A Forgotten Truth.  There.  All done.  Right? Nope. This series won’t end! 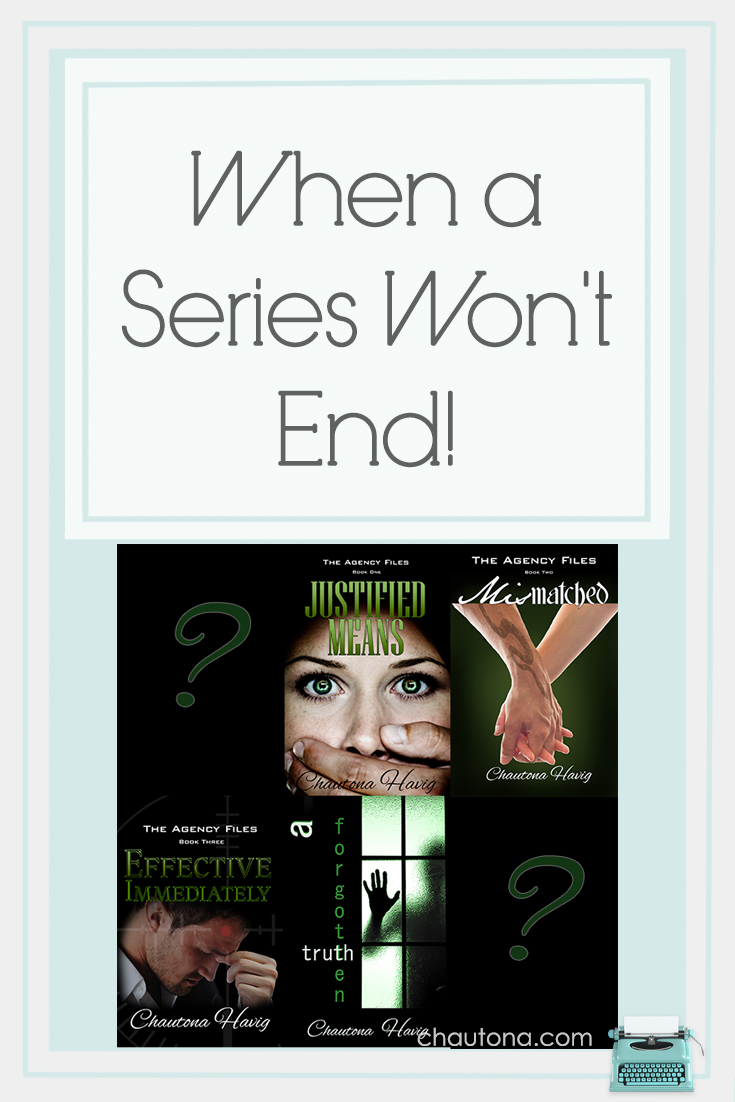 (Links in this post may be affiliate links and as such, I may receive a small commission at no extra expense to you.)

Yeah. Not so much.  I’d forgotten that I already planned a connection with another Rockland “The Agency.”  You know, the wedding planning company that is featured now and then.  If you don’t know, it’s mentioned in the early Past Forward books and has quite a prominent place in Speak Now–-including a bit of a loose end I left deliberately.  Just enough to make you wonder but not a whole plot dangling out there.

Then I realized that another book, one I mockingly call, A Man and a Mouse, really needs The Agency to help with their… situation. So, I thought I’d try to combine that one and the other book for a nice even five stories.

Yeah, not so much.  Look, here’s the deal. The (Bridal) Agency is already a combo book. I had a book about one of the characters in it and realized that it would better suit having one combined book. Adding a third (and full) plot is author suicide. So, well, six books works.  Except that I really kind of wanted a book about how Mark opened The Agency.  Seemed like a good idea to me.  Okay. Seven books.  We can do this.  After all, if Rowling can do it for Harry Potter, I can do it for Keith and company.

Just one problem.  What about Paris and Henry?  Who are they?  Sorry.  Gotta read A Forgotten Truth or it’d just be a spoiler.  So, I thought about a spin-off series.  That way, if I wanted Keith and Co. in the book I could, and if I didn’t.  Well, that’d work just fine, too.  Three books filled my mind inside twenty-four hours.  I think. Maybe it was four.  My brain is getting fuzzy with the details.

It wants to write them, but I’m finishing what was supposed to be the last Hartfield Mystery right now.  One problem.  It’s not the last either.  My amazing author friend, Cathe Swanson (who a certain villain was patterned from, sans the murderous tendencies), helped me come up with at least one more.  Gulp.

And, there’s kind of another problem.  I have this book that is not part of the Rockland Chronicles.  It’s just a stand-alone story about a writer in the Yakima Valley who teaches writing courses at a Seattle community college. I realized the other day that she might just decide to enlist the help of… you guessed it.  Keith and Co. (A.K.A, The Agency)  Why?   Well, this little quote image might explain that. See what I mean? She might just need help!  She has the means–barely–to request it, too.

The Agency Files refuse to conclude in a nice, satisfactory way.

Look, I have PAGES in my writing planner that are dedicated to one thing–my series.  No. Joke.  PAGES.  I counted the series I have started and are yet unfinished.  Are you curious?  Here goes.

I think that’s all.  I could be wrong.  *insert sigh here*

I’d just say no.  I know how.  Ask my kids.  But there’s one teeny tiny problem.

I don’t want to.  I want to write these Agency Files books.  They’re calling to me.  I want to show you how Mark got involved, Keith’s first case, Paris and Henry, and Ramon and Ana.  You’re gonna love Ana.

There’s only one solution.  Anyone have a bargain basement cloning shop?  I could use a few of me. One to do the cooking, another to do the cleaning, and another to do the grocery shopping.  Wait.  Forget that. Seriously, if you could just get the groceries to appear on my door with a list of what to do with them, I’d be golden.  Until that marvelous day, I’ll keep plugging.  Angela the wonder server will keep me hydrated at Denny’s, and Ashley will wield her whip with skill that terrifies me to think of where she acquired it.  Meanwhile, all I need is a good dangerous looking wedding image for a cover.  No biggie…  (Hint: most look like serial killer or zombie things)

So which of the new Agency Files ideas are you most excited about?  Mark’s story?  Keith’s introduction to the Agency?  Meeting Ana?  Or maybe you want more of Paris and Henry?