Lady in Waiting by Susan Meissner is one of the first historical-combined-with-contemporary books that I actually liked. The book became one of my favorites. 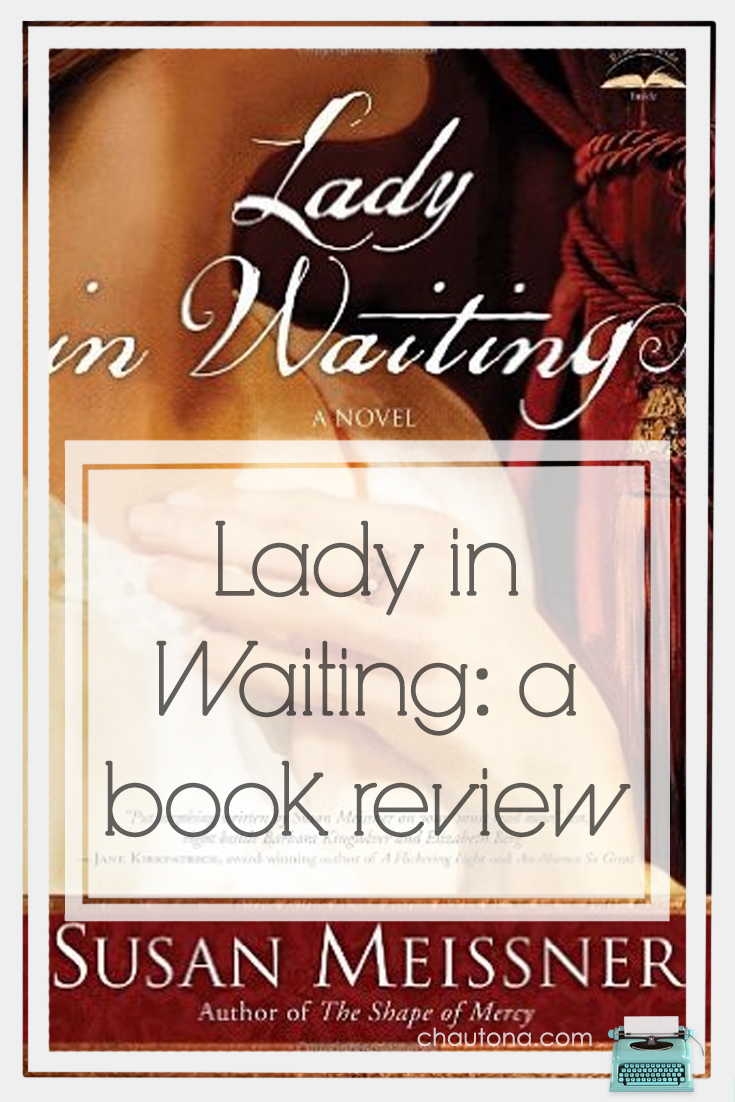 (I originally wrote this review back in 2011 and have revised it for this post. It also contains affiliate links which provide a small commission to me at no extra expense to you)

An Overview of A Lady in Waiting:

Publisher’s Synopsis:  Love is a choice you make every day.

Content in her comfortable marriage of twenty-two years, Jane Lindsay had never expected to watch her husband,  rad, pack his belongings and walk out the door of their Manhattan home. But when it happens, she feels powerless to stop him and the course of events that follow Brad’s departure.

Jane finds an old ring in a box of relics from a British jumble sale and discovers a Latin inscription in the band along with just one recognizable word: Jane. Feeling an instant connection to the mysterious ring bearing her namesake, Jane begins a journey to learn more about the ring—and perhaps about herself.

Then the story switches: (my note)

In the sixteenth-century, Lucy Day becomes the dressmaker to Lady Jane Grey, an innocent young woman whose fate seems to be controlled by a dangerous political and religious climate, one threatening to deny her true love and pursuit of her own interests.

As the stories of both Janes dovetail through the journey of one ring, it becomes clear that each woman has far more influence over her life than she once imagined. It all comes down to the choices each makes despite the realities they face.

You should know that once upon a time, I didn’t enjoy historical fiction. This is primarily because my experience with it in the Christian Fiction realm was what we used to call “prairie bonnets”. The genre later broadened to include “Regency bonnets” and “Victorian bonnets”, and now we have “Amish kappes“. 😉

So, with that in mind, you won’t be surprised that I almost didn’t accept this book when Waterbrook offered it to me. In my opinion, it’s hard to write two eras without feeling like the author just had two stories to write. But, since neither were long enough for a full-length book on its own, he or she combined them  Well, thankfully, that isn’t the case here.  I suspect that Mrs. Meissner had plenty she could have added about both stories had space allowed.

As it is, I thought about each of the three main characters in the book long after I’d closed the pages. I still wonder what else there is to know about these characters she created.  In my opinion, that indicates excellent writing. When a reader doesn’t want the story to end, ponders the possibilities, and considers writing the author to ask for more, you know you have a winner of a book.

So, what’s so great about A Lady in Waiting?

What I love about the primary story (the one set in today) is that the marriage struggle has more at the core of it than it seems–but no deep horrible betrayal or ugliness.  I loved how the end of the book doesn’t wrap everything up in a nice, neat package, but she does leave you with the assurance that all will be well.

The story of Lady Jane Grey proved surprisingly fascinating.  Told from the perspective of her seamstress, the core of the tale has more to it than your typical royal alliances and power struggles.  I love that.  At the heart of the story isn’t just a young girl’s fledgling love for a man, but her deep abiding love for her Lord.  She has embraces the tenets of reform and refuses to recant, even under the threat of certain death.  Her husband recants.  Her father-in-law recants. But Lady Jane, a mere girl of sixteen or seventeen, refuses to deny her faith. She goes to her death with the words of Jesus on her lips, “Lord, into thy hands I commend my spirit.”

A bit about the writing:

A Lady in Waiting is written in first-person but is so well done that I didn’t realize it until half-way through the book.  I tend not to like first person writing, but I must say if all were written as smoothly and comfortably as this one, I’d probably become a convert.  My only objection is that a few words here or there that seemed to jar.  They’re rare, but they are there.  For the most part, it’s simply an excellent book.

Do I recommend the book?  Without question.  If you like historical fiction, this is one you shouldn’t miss.  If not, give this a try.  Another book by Susan Meissner that I enjoyed was The Shape of Mercy. You can read the review HERE.

Previous Post: « No Matter What Happens This Series Won’t End!
Next Post: The Shape of Mercy: a book review »