There it is, a shiny new book, or perhaps an old, crusty one.  You crack it open to the first page of chapter one and read: “Who is John Galt?” You know, the minute you read those words, that something about it is important, but you can’t possibly know what.  So you’re left wondering.  And that works the magic of excellent first lines–they capture your attention. 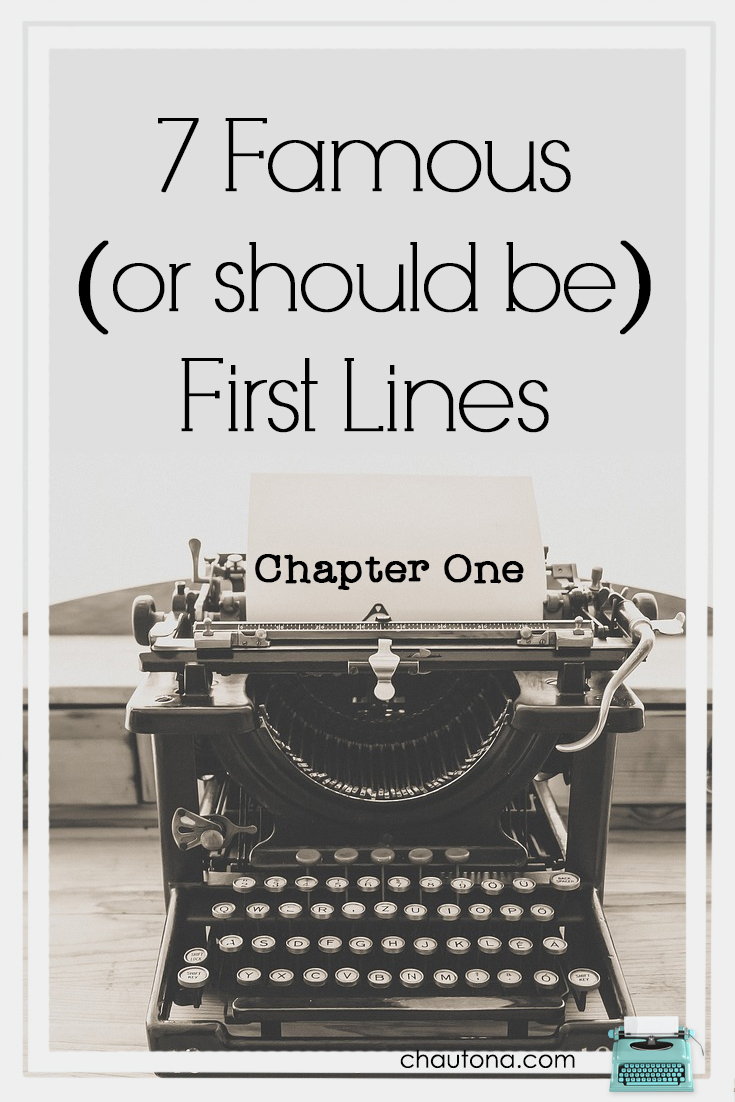 First lines often set the entire tone of a book.

You can see it in books like Twilight by Stephenie Meyer where the opening line, in first-person, says something about how she’d never considered how she’d die.  Considering it’s a book about those who have essentially died–but didn’t–it definitely sets the tone. Like the example above from Ayn Rand’s Atlas Shrugged, neither of those quotes are, in my not-so-humble opinion, “Great first lines” that should be recognized as such by everyone.

And perhaps the ones I nominate here aren’t grand enough for more intellectual or literary tastes, but they’re my favorites.  Some are fairly well-known.  Others, not so much.  But all of them gripped me from the moment I read them and I wanted to share them with you. However, I find it most interesting, however, that some of, if not most of my absolute favorite books of all time have fairly nondescript opening lines.

Note:  Just because the book is listed, doesn’t mean I recommend it without caveat.  It just had an opening line that gripped me and stuck with me.

Counting down from seven…

7.    “Where’s Papa going with that ax?” said Fern to her mother as they were setting the table for breakfast.  (Charlotte’s Web by E.B. White)

This one has such a fabulous juxtaposition of  bright sunniness (breakfast tables always feel bright and sunny to me) with an ominous undertone.  Brilliant.

6.    “There were crimson roses on the bench; they looked like splashes of blood.”  (Strong Poison by Dorothy Sayers)

While it’s not an incredibly crafted sentence that leaves you gaping breathless at its literary genius, the words paint a cruel picture considering the book opens in a courtroom where Harriet Vane is being tried for murder.  With just a few words, it hints at murder and innocence (blood and roses).  Beyond brilliant.  (I recommend the BBC “movie“ with Peter Etheridge and Harriet Walker, btw.  LOVE Lord Peter played by Etheridge)

5.    “The human race, to which so many of my readers belong, has been playing at children’s games from the beginning, and will probably do it till the end, which is a nuisance for the few people who grow up.” (Napoleon of Notting Hill by G.K. Chesterton)

Okay, while I don’t think Chesterton would recognize his line in the way I see it, I can’t help but read it as, “Some people never leave junior high, and that gets OLD for those who did.”

4.    “No one who had ever seen Catherine Morland in her infancy would have supposed her born to be an heroine.”  (Northanger Abbey by Jane Austen)

Can you imagine reading that line about yourself when you were, say, ninety?  Especially looking back on your life and seeing how silly you were as a young thing?

3.    “To say that I met Nicholas Brisbane over my husband’s dead body is not entirely accurate. Edward, it should be noted, was still twitching upon the floor.” (Silent in the Grave by Deanna Raybourn)

An online friend shared this (technically “these”) line(s).  I immediately went looking for the author and bought a whole set of her books.  Anyone who can write that line should get paid for it–even if I never have time to read the books!

2.    “My day didn’t start with murder, although the thought crossed my mind.”  (Fool’s Puzzle by Earlene Fowler)

Hands down, my favorite opening line (and scene) in any book I’ve read as an adult.  The next lines go something like, “She picked up the phone, and an ominous voice whispered, “Help!”  And if you want to know what happens next, you’ll have to read the book.

But the BEST first line EVER…

1.    “There was a boy called Eustace Clarence Scrubb, and he almost deserved it.”  (Voyage of the Dawn Treader by C.S. Lewis)

This thrills my heart every time I think of it.

This list made me consider what I think of my own books.

I really want that for my books–opening lines that resonate with the reader and stay.  I mean, the reason I chose   C. S. Lewis’ quote from The Voyage of the Dawn Treader as my number one quote is because it’s the one I quote to my children all the time when I’m talking about amazing writing.

This, of course, then made me wonder which of mine I would consider the best I’ve done.  I went through everything I have–in print and not–and frankly, was disappointed in most of the opening lines.  My only consolation is that, as I said earlier, most of my favorite books have singularly uninspiring opening lines.  So it works.  But, after looking at every single line of over a hundred manuscripts (most of them partial, yes!), I came up with two favorites.  I can’t decide which I prefer, but since one is in print and one isn’t–one is “youth fiction” and the other isn’t, I decided to share both.

“As Kaye Harper waited, her nerves danced a jitterbug through her heart, stomach, and hands.” (Confessions of a De-cluttering Junkie)

“Stories that have happy endings often have dismal beginnings. And this is one such tale.”  (Tales of the Ashdowne)

(Yes, I realize that the last one is technically two lines, but proper grammar would have them as one, so I think it still counts.  Why penalize the book because of a stylistic punctuation choice?)

I’m curious, though… what is your all-time favorite opening line?  I’d love to hear more.  I find them fascinating.