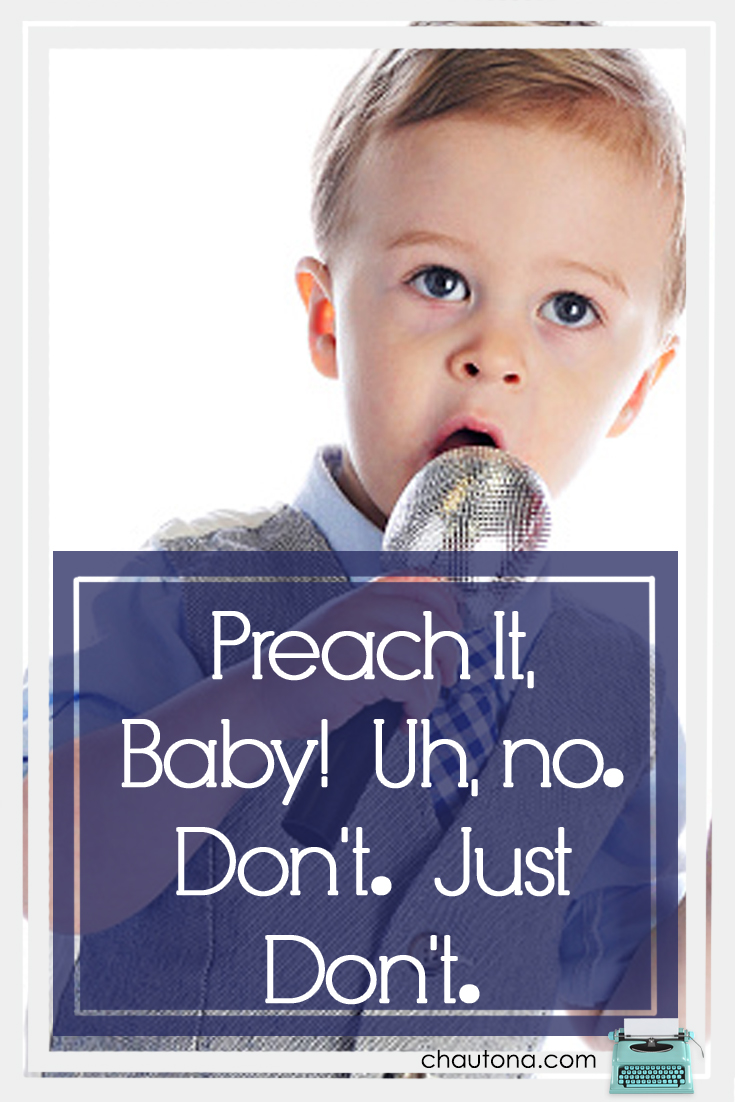 One of the best compliments I get is when someone sends me an email or leaves a review that says, “I like how your books are clean and point us to Jesus, yadda yadda yadda, but are not preachy.”

Forget that, what is “preachy” fiction?

In case preachy Christian fiction isn’t obvious, I’m going to define it my way.  Pretending to write a novel when you really are just trying to get someone to see something your way.

And why is that so wrong?  Well, aside from the arrogance of it, and aside from the “bait-and-switch” aspect of it–I mean, really, it’s a lie.  You promised a story.  They got a sermon wrapped in a storybook cover. It’s deceptive. Aside from all of that, it’s wrong because as authors, deep down we know our readers don’t appreciate it.

I spent a long time trying to figure out why I’ve always tried to avoid it. I mean, it’s just one of those things that you innately know–like “don’t use grammar wrongly” or “refrain from pretension, and eschew the excessive use of descriptive words that modify verbs.”  😉  Yeah.  That.

Then it hit me.  Cardinal rule for novelists–the first thing your editors find and send back for rewrites.  Show, don’t tell.

Links in this post may be affiliates that provide me with a small commission at no extra expense to you.

It’s why people seem to resonate with Willow.  She lives her life.  She doesn’t spout off to the world as to why they need to be her.  She just lives.  And her life shows the beauty of it.

Then people, like Ralph, are drawn to it.  It’s showing not telling.  If I had pontificated about the superiority of Willow’s semi-electric-free living and told the world how amazing she was rather than let readers see it for themselves, I wouldn’t have emails that come in almost weekly saying, “I want that life.”

They might be that kind of person who can’t help but teach and preach all the time.  We all know people like that. That’s not what I’m talking about.  By writing characters like that, I–or any author for that matter–am/is just writing realistic characters. They might be storytellers who hear something and say, “That reminds me of a time…”  I’m never like that, of course.  😉  But when things seem contrived and set up only to show a point, when the narrative goes off on a soliloquy–gag–you get the picture.

Themes are one thing.  Every book has a theme. Even if the author doesn’t intentionally use one, themes emerge.  Fiction teaches.  That’s not preaching.  That’s just the byproduct of a good story–you learn.  But when the book spends more time manipulating characters into behaving in ways with the obvious intention of trying to convert the reader to a different viewpoint, the story stinks.  Showing why people think or act in certain ways is one thing.  That’s the point of fiction.

But if people want a sermon, they’ll find a preacher to do that preaching.

I’m not a preacher.

So, I’ll keep writing.  I’ll keep cutting out scenes that, while not intentionally preachy, tell far more than they show.  First, because it’s better writing that way.  But also, because in doing so, I avoid the appearance of preachy.  And while it’s not “evil”, it’s almost as bad.