To be honest, I hadn’t thought of people being Quakers anymore, but there she was, a girl from my town walking to school talking about being a Quaker right then in 1986!  I tended to think of Quakers as historical figures.  William Penn. Dolly Madison. Then I thought of Benjamin West.  Painter. He was a Quaker, wasn’t he?

And Quakers wore bonnets and plain clothes, didn’t they?  She wore jeans and a—I find it kind of amusing—Shaker sweater.  Slouch socks.  High tops.  Not exactly the garb of some quaint sect.

I asked about her church.

Frankly, it sounded boring.  Her church still didn’t have singing.  They just sat. For up to three hours.  Waiting for someone to have something to say.  Sometimes no one said anything.  Nothing.  I asked about learning the Bible.  She said they were to use the Light within (Holy Spirit) to discern what the Bible meant.

”Whenever you come together, each one has a psalm, a teaching, a revelation, another language, or an interpretation. All things must be done for edification.”

I was relieved, frankly.  But curiosity didn’t end there.  I studied the Shakers and Quakers over the years—trying to see where I agreed and where I didn’t. Hardly found them in fiction, though.  Just a few.

So, when Celebrate Lit offered review copies Phoebe’s Light, I requested one the second the offer went out!  You see, I LOVED how Suzanne Woods Fisher handled the Amish—giving us a historical tale that adopted a fresh take to show the roots and origins of their establishment in America.

What would she do with the Quakers? 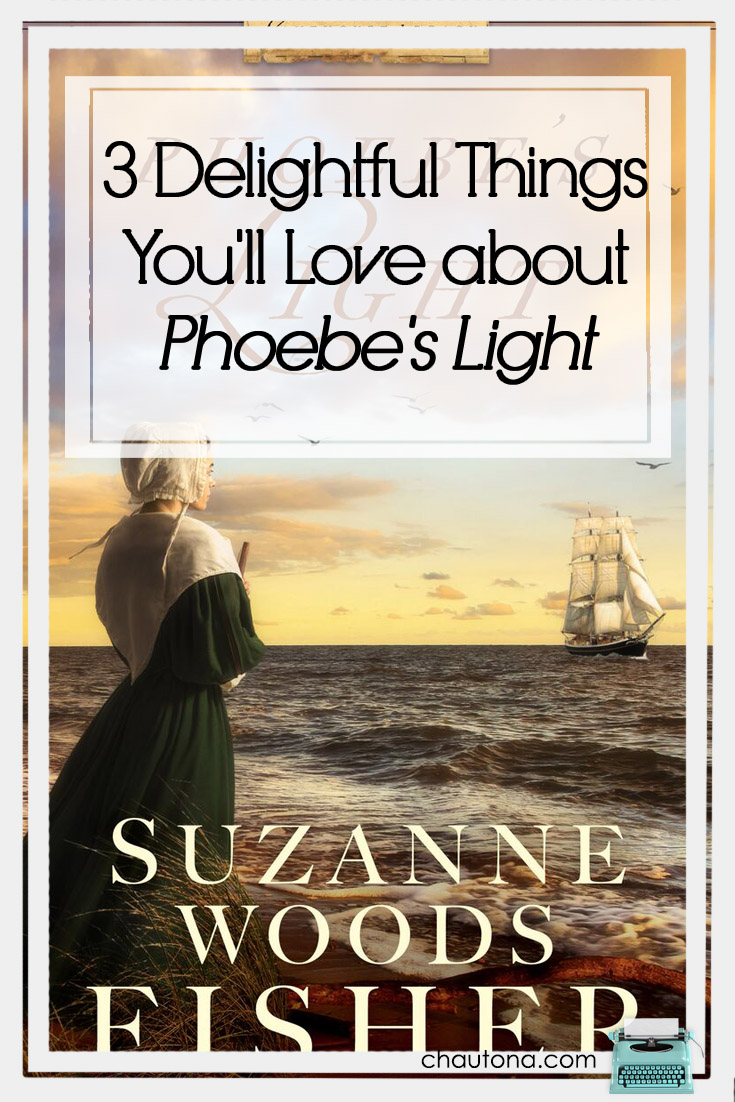 Would this series be anywhere near as interesting?  Look, I had no doubt that I’d enjoy the book, but I never expected to love it more than the Amish Beginnings Series.

I do. And here are three reasons why.

It’s so easy to create villains who are “all bad” and heroines with token flaws.  It takes a masterful storyteller to combine sympathetic characters with realistic flaws and virtues—on both ends.  Fisher does it with both stories.

Oh, yes.  This book weaves two stories together—one told in a family heirloom—a journal.  And the other in the narrative.  And through two completely different storytelling styles, she shows flawed and beautiful characters both.  Phoebe is the protagonist every reader loves.  She’s strong, but gentle.  Her virtues are plenty and faults real. She learns and grows as the story emerges but not in some moralistic tale that makes you want to run.

The Captain, her father, her friends—every person in the book has a consistent character—even as that character grows and changes, those changes fit within the character itself.

One of the things I love most about Fisher’s writing is how skillfully she weaves description into the tale.  You feel as if you’re there—can smell the salt and brine.  You dread the whaling because you know you’ll be glad you’re not on that ship—really smelling it.

Yet she never overloads the narrative.  Every single gets placed exactly in the right spot to ensure you experience the book as if you stood beside those characters and lived their lives with them.  But Fisher NEVER smothers you with that description.

Yes, she surprised me.  Few authors do, and no, she didn’t surprise me on everything, but that she surprised me at all was a delight.  There was one small bit in the book—pivotal but small—that I became so wrapped up in the story and missed it.

Do I have any complaints?

First, one element regarding Phoebe’s future I found rather conveniently wrapped up.  Look, I know why she did it, and I’ll be honest.  I probably would have been annoyed had she not.  How’s that for unfair?

Still, it’s true. Sometimes the most satisfying ending is also a bit too convenient to be realistic.  I chose to decide that I’d take satisfying, though.  Because realistic would have just been way too disappointing.

And second, I am not looking forward to the wait for the next in the series. Sigh.

Previous Post: « Why I Refuse to Apologize for Stealing a Brilliant Idea
Next Post: Important Thoughts on Faith, Fellowship, and Mirrors »