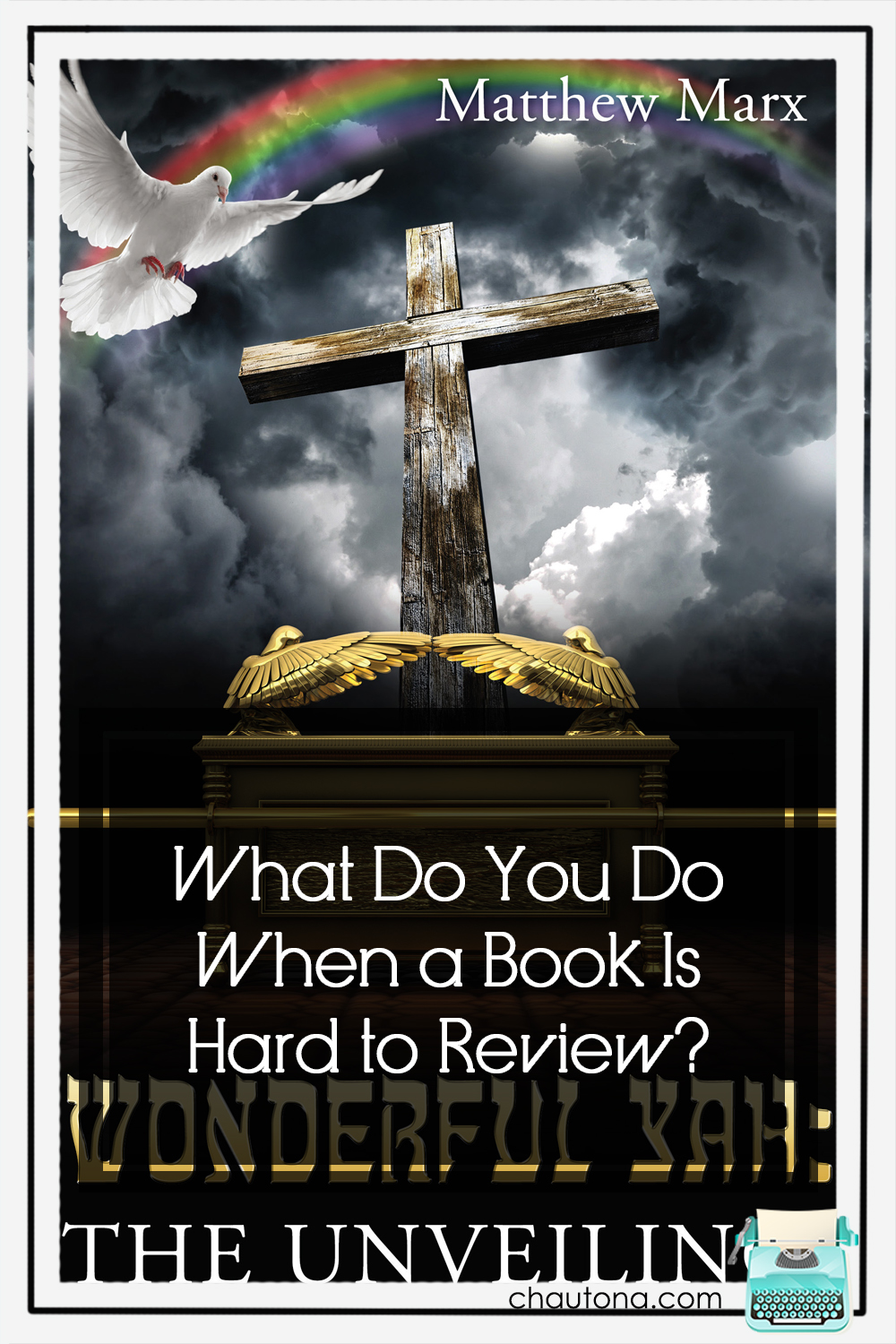 Sometimes a book comes along that you just have to read. The Wonderful Yah is one of those for me. Despite a cover that didn’t appeal to me, any book that seeks to help readers understand the depths of Scripture is a book I want to dive into. The questions remain, then:  First, “Who is Yah?” and second, “Does the book help me understand Him better?”

Will the book help readers understand Him better? The answer to that one is significantly more complicated—kind of like the book, actually.

I want to say upfront that I think my review is going to come off unfairly tipped to the unfavorable side.  This isn’t because the book isn’t worth considering. It’s more that there is much more about it that bothered me than excited me. So, I want to state now that just because I seem to have a lot against the book, that’s not quite true. It’s more that I see issues that will possibly bother readers and I want to point them out.

If there was equally as much that would attract and encourage readers, I would be including that as well.  As it is, the bottom of my review will offer recommendations for who the book might most interest/benefit.

Note: links may be affiliate links that provide me with a small commission at no extra expense to you. Additionally, this book was given to me by the publisher for review purposes.  Opinions are mine.

First, Wonderful Yah could use a developmental editor who knows how to organize a project like this. It seemed as if every time the book gained some momentum, I was ripped out of the text when, for example, Mr. Marx began to explain in minute detail why he chose to use one form of Hebraic spelling over another.

Additionally, more than once, he informs us of some nuance or another and then tells us how this isn’t relevant to the study so he won’t expound (much) on it. I don’t understand the purpose of bringing up something if you have no intention of actually exploring it.

Another thing Mr. Marx tried was to use a key and its formation and usage as an illustration of what the book is supposed to do for the reader.  For me, it became distracting from the purpose of the study rather than helpful.

Finally, I don’t think the author knows his true audience. He states that he is writing to scholars, academics, and theologians and hopes “lay people” will benefit from the simpler elements of his work. From what I saw in his book, it appears to me that he really wants to reach the unsaved who have not heard of the concept of a triune God and might find that confusing.

…ish? I found the writing style to be difficult to follow—not because I didn’t understand what he said but because of the inconsistency in style. In many places, he refers to himself as “the author” and then follows that by using a casual “we” in stating where the study of this next nuance will lead. There’s a swing between almost pretentious and conversational writing that makes you feel a bit like you’re on a yo-yo.

Additionally, his writing “voice” often comes off as condescending.  I have no doubt that Matthew Marx is a brilliant man, but like many with higher than average intelligence, he tends to “talk down” to his readers in an almost offensive tone.

All of that said, I found no typos, and each individual sentence was grammatically correct.

Did I find anything that concerned me?

First, early on, Mr. Marx informs us that because people have obscured the meaning of the Godhead with “semantics,” we’ll need to approach his book with a “childlike faith,” believing that God will show them what they need to know. While the author doesn’t expressly state it, I felt a strong overtone of, “God will show you that what I’m telling you is how it is.”

He further “translates” certain words in certain verses in order to have us read it as he understands the verse to read. While I am not saying that I disagree with his translation, even, I will say that I find having his translated words interjected into the Scriptures as if automatically verified as a true rendering of the original word meanings to hold potential danger in mismanaging Scripture.  As far as I can see, I don’t think this happened, but the cavalier way in which it is added does make me uncomfortable.

So what is this great mystery?

God’s name is Yah.  Really, that’s what it boils down to. A summary of Wonderful Yah, as I understand what of it I read (I found myself skimming when things became redundant and condescending), can be summarized in one sentence. God is one—Father, Son, and Holy Spirit.

That’s it. That’s what this book teaches.  It’s a long, pedantic treatise on the Godhead written with the assumption that the reader can’t possibly understand this concept without knowing the meaning of each Hebraic letter, the meanings behind them, and the different additions to the common spelling practices of Hebrew.

I confess that the way things were written made me fear for heretical teaching in Wonderful Yah.  I don’t think it’s there. I think most, if not all of what he actually tries to share is Biblical. Where I take issue is that he writes as if he has unlocked some great mystery that no one can possibly understand without knowing these Hebraic origins of God’s name. I disagree.  I’ve never met anyone who had half as much trouble understanding that God is both one and three as Mr. Marx asserts.

Yes, the study is interesting. No, it isn’t anything new or amazing.  It’s simply an overly-dramatized retelling of basic Bible doctrine utilizing the roots of the Hebrew spelling of God’s name as the premise for understanding.

While this makes it sound as if I’m upset that I spent so much time on the book, I’m actually not. I’m thankful for the review copy provided to me, and while I wish I could write a more glowing, favorable review, I am not sorry that I read it.  I may even go over certain parts again. Should I find that I change my mind about some things, I’ll be sure to adjust my review accordingly.

Recommended for people who like research, who want to find ways to explain the Godhead to people who don’t yet know about our Lord God Jesus Christ, and for those who are interested in Hebrew and the Hebraic origins of Christianity.

Previous Post: « All the Preparation in the World Won’t Write It for You
Next Post: Be Sure Your Sin Will Find You Out »