I’ve shared before that my favorite server, Angela the Wonder Server, once told a man that a “famous author” spends time writing at Denny’s every night. That would be me—the “famous” author.

Impressed, the man asked what genre I write in, and Angela knowledgeably said, “Christian fiction.”

His response? “So, what…? She writes lies about God?”

And though I can’t help but giggle over this, I’ve actually been taken to task for writing “lies.” Fiction isn’t true, therefore it’s a lie. And some people think it’s wrong to “write lies.”

So that begs the obvious question: 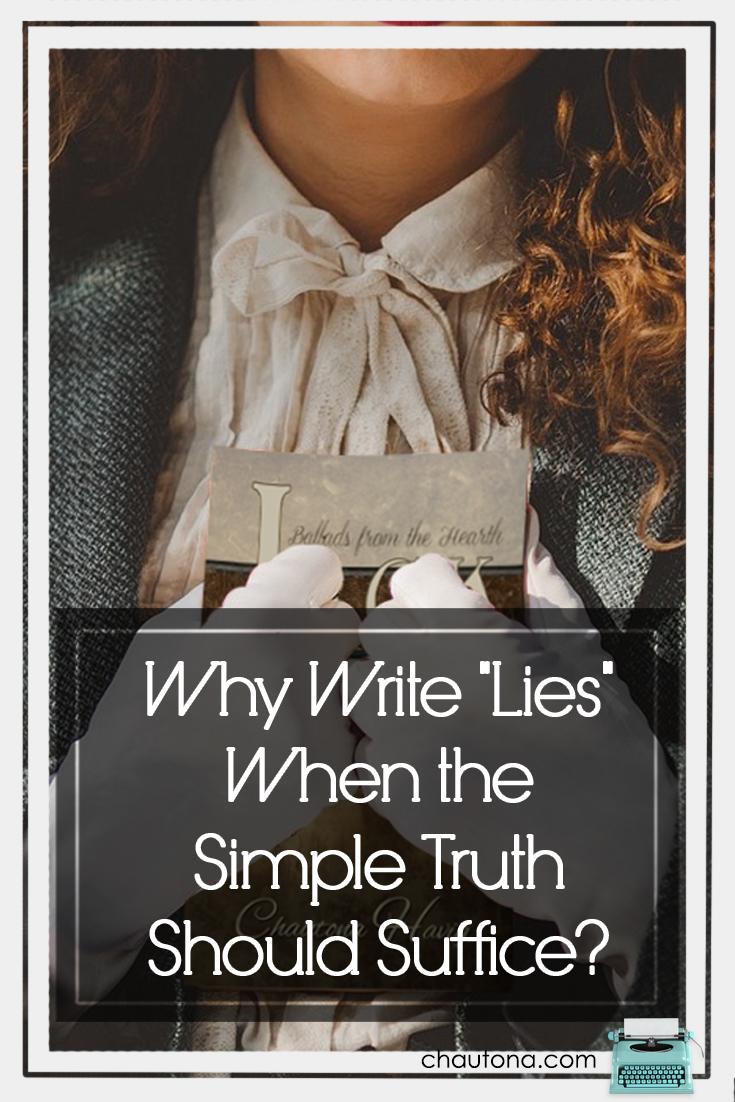 Note: links are likely affiliate links that provide me with a small commission–doesn’t cost you extra, though.

Why Write “Lies” When the Simple Truth Should Suffice?

For me, it’s all about story. I learn best when I have an illustration or an analogy to follow. In fact, as a kid, I was convinced that Jesus told parables because He knew I needed them.

Still, when I try to explain this to people, they still don’t always “get” it. Well, I received an email recently after the release of Ties That Blind. I got permission to share part of it with you.  This, folks, this is why I write lies. This is why my heart loves fiction.

“Loved [the Sight Unseen Series] series. I also really liked the Agency series, but this one hit close to home because I recognized Ella’s life. It was a huge wake up call-especially when I read [her story]. That’s exactly how I feel. I went to the doctors and am getting help. Thank you for writing this.”

I read that and wept.

I wrote back and said,

People ask me all the time why I write fiction instead of “Christian living” nonfiction. This is why. Because sometimes we see things better in a story. I totally get you with Ella. I see myself in her much too often. It’s such a wakeup call.”

I’m not a naturally emotional person, but story evokes emotion within me. I can handle facts quite well, but seeing that David sinned in stealing a man’s wife by reading, “David committed adultery and murder. The consequences were severe” holds less of a punch than seeing it play out on the page. And even David needed a story about something that resonated with him (sheep) for him to fully see his sin.

When we emotionally connect to something, it keeps our attention longer and makes a lasting impression on our soul.

My dad knew that. I’m convinced it’s one reason he sang all those morbid songs that he did when I was a child.  No, really.  My childhood is full of songs where…

Guy meets girl.  They fall in love. He sees her with another man. He runs away. She pines for him. He finds out it was her brother after she’s dead.

Boy is dying. He got cool shoes for  Christmas.  Give his toys to his friends, but save his shoes for his little brother.

It’s a hard life here. No food. Nowhere to sleep. Dependent on kind people for basic needs. But Heaven is coming. “Don’t you know I’ll be glad when I’m dead.”  No, really.  That’s the last line of the chorus.

Blind child discovers her father is getting married again. Wants to accept new mom, but it’s hard. She’s a sickly kid. Gets dad crying over the loss of his dead wife hours before the wedding.  He carries her to bed.  She dies.

Guy has horse. Uses it to rob people. Horse saves man by racing to London in time.  Horse dies.

Boy has dog. They have fun. Dog gets old. Boy shoots dog.

Man wins wife in a card game. They fall in love. He gets hurt. She rides off for help. They both die.

My throat ached as a child whenever Dad sang.  Part of it was the beauty of his playing, the clear, true notes of his voice.  It was.  But part of it was how  painfully beautiful his songs were.  They spoke of love and loss. From them, I learned that to live life, you had to be willing to risk that pain—anything else was just existence.  I didn’t want just to  “exist.”

You know, people don’t die like they used to. That sounds weird to say. Everyone dies. But back when these songs were first sung, children died young.  Men died young. Disease, famine, and hard lives killed people at very young ages. I recall two people dying when I was a child—my ninety-six-year-old Granny when I was twelve (we kind of expected it, you know), and my brother was murdered that same year.

If I hadn’t had the aching songs that tore at my heart every time Dad sang them, I don’t know how I would have really grasped Bear’s death.  It wouldn’t have been real to me.

But Dad taught me that grief is a thing simply by singing about things that should make you grieve.

There was my favorite song—or at least, my favorite that I could get him to sing often. “Cowboy Jack.”  It’s morbid, too.

Man meets girl. They fall in love. They quarrel. He becomes a cowboy who sings about the girl back home. Goes back. She’s dead.

That song taught me more than how to cope with death.  It also taught me about arguments. I recall thinking, “Why did he just ride off like that?  How did that help anything?  If he would have just talked it out with her, things wouldn’t have been so bad, and she might not have died.”

From that song, I also learned that running from your problems can create larger ones. Yes, talking through problems is important, but look what running did!

“Blind Child’s Prayer” taught me acceptance and sensitivity  The child begged not to have to meet her “new made mama” in her mother’s sitting room among all her mother’s things.  I wouldn’t have thought of that.  But the song taught me as much, and it taught me sensitivity when her father begins to cry over his loss again.  She’s immediately taken out of her own self-pity and prays for them both.

Prayer as an answer to heartache—what a novel idea! 😉

Yes, I write lies.  Yes, the truth is superior.  But in my “lies,” I try to show the truths of Scripture so that people like myself can learn those deeper truths by seeing how fictional people live that principle—or don’t.

When I write my “lies,” I hope for one thing to happen. I hope that someone, like the woman who emailed me about Ties That Blind, will see Scripture’s truths illuminated in story. When I write my “lies” in my stories, I pray that they will connect readers with the Master Storyteller.