Christmas 1982.  The Esplanade—Oxnard, California. The store sold nothing but mugs, and I read every one of them. I bought one for a friend that showed a hippo, a flying bird, and two sheep.  Cracked up all the way home on that one (hippo, birdie, two ewes).

But then there was this other one.  I debated for hours.  Literally.  I came back to the store at least half a dozen times before I plunked down the last of my Christmas shopping money and watched the gal wrap up the mug.

Aunt Marilyn would love it… or she’d kill me.

The delight on her face when I handed her a wrapped box—nerve-wracking. Would she switch to embarrassment?  Hurt?  Anger?  Would my dad kill me for being disrespectful?

She opened it… laughed.  Gave me a hug and filled it with coffee right then. Okay, she washed it first. Let’s not get too crazy with the facts.  But still, she did.

What did it say?

Apparently, sheep puns were the in thing in 1982.  Probably from all that partying. (I sure hope that’s how that song I’ve never heard but have heard people talk about for like three decades goes).

Aunt Marilyn loved that saying. She’d seen it on a sweatshirt in a catalog when I was at her house one day and had laughed and laughed.  That laughter is why I took a chance on offending her.

Back then, I couldn’t imagine that thirty years later, I’d be sitting in a Denny’s booth writing out the story for people to read… and carrying an extra ten to fifteen pounds for every child I’d ever had. I often point to a roll here or there and name it.  “That’s Jenna, that thigh is totally Challice, this chunk is Ethan…”

I also don’t play games. The truth is: I’m fat.  I want to say, “And I’m okay with that,” but that’s not quite true.  It’s more that I’m okay with saying I’m fat rather than trying to sugar coat it by saying I’m “carrying a few extra pounds” or “I’m fluffy.”

As a writer, I sometimes write deliberately skinny or overweight people. Usually, though, I just write people and let the reader decide how “fluffy” they are or aren’t.

But readers often say they like having characters on the larger side. So, when I saw a new book by Robin Helm—one in which Elizabeth Bennet is a little on the “more to love” side–I had to read it.

So, I asked her if I could order one. She sen a copy of More to Love to me as a gift.  And then when the tour opened up with Celebrate Lit, well… the least I could do is sign up!  So, I did!…

And in it… Jane Bennet helps Elizabeth with her “fluffy” issues. 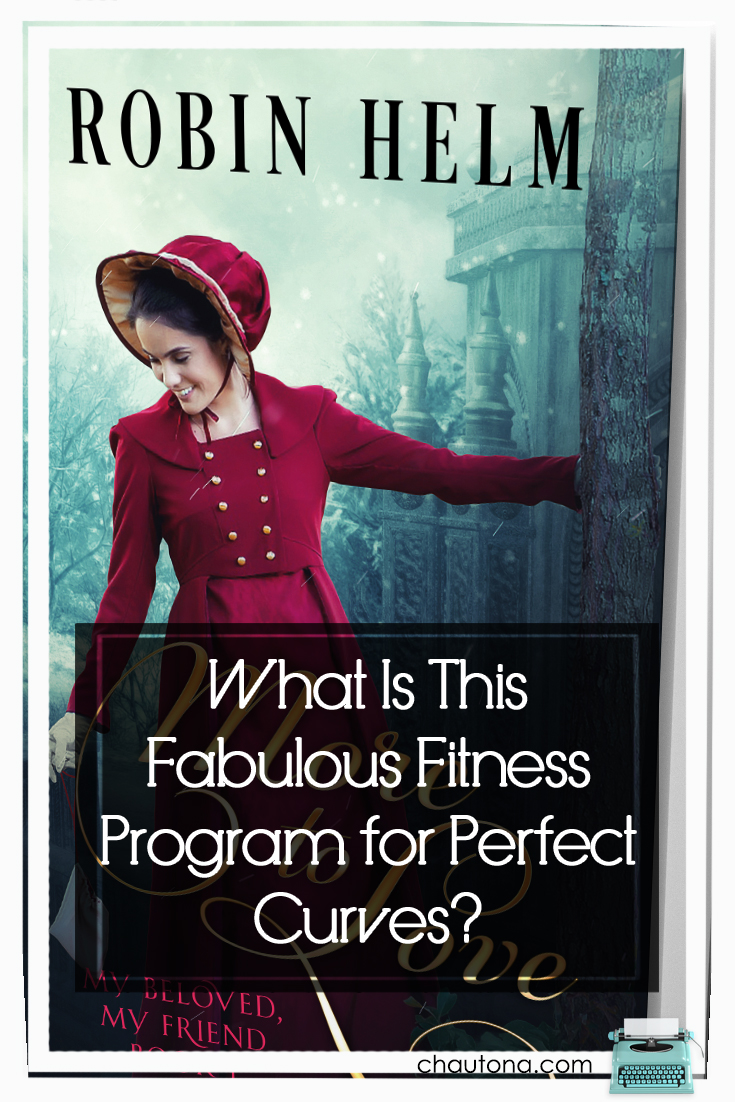 Note: Links may be affiliate links that provide me with a small commission at no extra expense to you. Additionally, I was given this book and volunteered to review it.

What Is This Fabulous Fitness Program for Perfect Curves?

In her usual creative style, Robin Helm has conceived a Lizzy Bennet who is self-conscious about her weight. We can thank our beloved Darcy for that one, but it does make for an interesting character shift.

We’re used to seeing Elizabeth as strong-minded, confident, and perhaps “obstinate and headstrong?”

And yes, she most certainly is, but there’s more to her, too.

I’ll be honest.  The insecurity she displays about her weight and girth didn’t seem to fit her at first.  Of all the Bennet girls, only Mary seems less inclined to be influenced by someone’s opinion of her.  After all, in Austen’s version, she always seems more amused than insulted by Darcy’s “not handsome enough to tempt me” statement.

However, the more I thought about it, and the further into the story I went, the more plausible it became.  After all, the most practical woman can become ridiculously self-conscious of her weight.

Once that idea planted itself in my mind, other issues I had with her character disappeared. It all made sense.

Sure, Jane Bennet helps her sister shed a few pounds, but hers was not the “fabulous fitness program for perfect curves.”

That, Ms. Helm teaches us, is love.

Seriously, I’m glad I requested a review copy for that little bit alone.

Recommended for lovers of Regency and other historical fiction, Austen lovers, and especially of the #TeamLizzzyandDarcy fan club. Purists may take issue with a few small departures from the original, but aside from that, the only other expected objections will be a few small things some may consider loose ends. I see why these were let go and didn’t object myself. As with most Regency fiction, the protestations of love and affection were… profuse.  I did realize, however, why this may have been a genuine thing back then.

The opportunity for physical affection came at too great a price. In its place: words… lots of sappy words. 😉

Previous Post: « How Can You Praise God When You Made Every Mistake in the Book?
Next Post: Strike the Mark: Was It a Total Win or Epic Fail »