“Chautona? Did you finish it?”

I tried not to show my thoughts as I nodded. “Yeah.”

Who could blame her? Killer cover, great title, intriguing synopsis. Of course, she was eager to hear all about it.

I just wasn’t as eager to talk about it as I’d hoped to be. 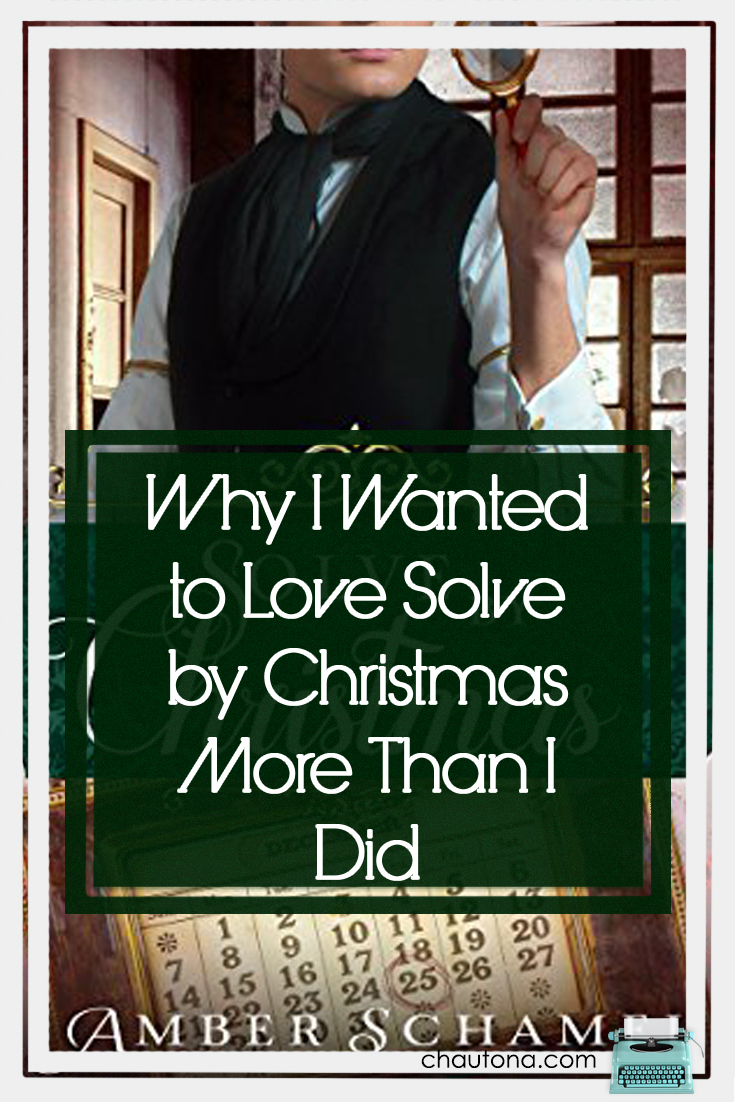 Note: this post may contain affiliate links that provide me with a small commission at no extra expense to you.

I really wanted to love Solve by Christmas because it has everything I like in a book. Mystery, self-discovery, character growth, and all in a well-paced narrative that keeps you interested. It does!

In fact, there are so many things that I loved about it. Let’s start with those. Maybe it’ll make writing what I didn’t love easier.

Some people might think that it’s not fair to put so much stock into a cover (pun intended for those who know cover design), but a good cover is a huge bonus for any book. This one has lovely elements that I have almost nothing to complain about.

This is equally lovely—short and snappy with everything it needs to tempt you!

The book never dragged—not once. That’s hard to do with a mystery, and I read somewhere that this is Amber Schamel’s first. Well done on that!

Well, some of them. What I loved most about the characters is that they were varied and consistent. I just wish… well, let’s talk about that later.

Ms. Schamel chose a perfect time—just modern enough to have some of the more interesting elements of the new century without losing the delights that show the influence of Victorian and Edwardian culture.

One could argue that the plot was rather simplistic and easy to follow. It was. But aside from parts that I’ll deal with later, that was part of the charm. I didn’t see this book as about being a complicated plot that we were supposed to have to riddle out but more about HOW Jasper, the hero, would do that and his character growth. Because of that (assuming I am right, anyway), I consider the plot to be a good one.

I requested to review Solve by Christmas from Celebrate Lit. I assume that I received an ARC. If not, the book does have some typos but isn’t excessively littered with them. Other than the caveats I’ll share below, this book is written well with good attention to reader enjoyment. Details are there without weighing down the plot. She leaves enough clues throughout the book to give away the story without handing them over in a bag and saying, “Here… work out this puzzle. It should take you 2.5 minutes” like some books seem to.

Alas, Solve by Christmas also has some unfortunate flaws that kept me from loving it as much as I’d hoped to.

I said I loved how varied and consistent they are, but that’s where it ends for most of them. While Denny was pretty much perfectly imperfect, our hero, Jasper, not so much. I LOVE flawed characters, and he is one. But you have to be sympathetic to them as well. I wasn’t. I just wanted him to figure everything out so I could be done with him. Yes, he improved over the book, but a little too neatly—like the insta-conversions you used to read in Sunday school papers.

Okay, while most of it was great, at the beginning, I was nervous. Please don’t let it stop you. It gets good and quickly—except for a few things I need to note. There were a few odd word choices. The most notable was using the word whelp instead of welt. I even double-checked to be sure there was no archaic or unknown usage of it, but no. According to several dictionaries, whelps are only the offspring of dogs or a metaphor for one. In fact, I cracked up while reading in Denny’s when a rock, wrapped in a snowball, was supposed to produce a puppy on Jasper’s back by morning. Yes, I got odd looks.

I don’t know what else to call this, but there were things inserted into the story that seemed placed there only to draw greater comparisons to Sherlock Holmes or other stories.  The mirrors?  I know there is probably some great symbolic thing I missed by not appreciating their insertion, but I found it rather mystical and weird rather than clever and cool.

Using mirrors to give us insight into what Jasper looks like?  Huge disappointment.  Unless the character doesn’t know what he or she looks like or has altered his or her appearance hugely, it’s just not a good idea. It’s awkward.

But that wasn’t the only one.  There were several places where things seemed inserted only as decoration or an aid to the completion of the story rather than because the story needed them.

There were a couple of things that made me blink, but nothing huge. Still, I note it only because I know I have a few readers who are really bothered by that.

One was the mention of discharge papers from the hospital. From what I saw in super-quick research, most hospitals had ledgers that showed admittance and discharge—sometimes with notes etc. But I didn’t find anything about being given papers to go home like we are now. Considering I don’t remember being given papers even in the late 70s (after copy machines and ditto machines), I suspect that it might not have been the custom back in 1913. Still, it was VERY minor. Only mentioning for the above reasons.

One scene in this book—a pivotal one as well—is almost identical to one in Gaskell’s North & South. I’ll admit that I was surprised at how bothered I was by it… but I was.  It just felt much too identical.   Now it isn’t.  The aftermath is different etc., but the reasons, the situation, the positions… the injury etc.  Yes, it all feels way too familiar, and that disappointed me.

But after all that… I’m giving it four stars.

Why?  Well, it’s taking me a minute to grapple with that fact.  I was hovering at two or three while I read it and even when I began writing this review.  But you know what?  Amazon’s star system is about Loved it… (nope).  Liked it… (yep.  I guess I did because it was better than…)  Okay (not so bad that it was ho/hum)… Didn’t like it (but I did.  Just didn’t love it) and Hated it (did NOT deserve that).

So, with “liked it” for my final opinion (although barely above “okay”), I decided to go with four stars after all.  I just hope for more next time.  I think Ms. Schamel has it in her to give it to us.  And I can’t wait.

If you enjoy Christmas stories that don’t really focus much on Christmas (that was nice–just thought of that) but have the deeper themes of it in underlayers, if you enjoy mysteries that are written to show how the detective does his job, and if you like quirky characters and don’t mind a bit of underdevelopment of them… then I suspect you’ll enjoy this book.  Give it a chance so you’re ready for the next!

Previous Post: « What Do YOU Think I Should Do about My Serial Novels?
Next Post: 3 Reasons Why You’ll Love Lead a Merry Dance »