“You know, that’s a terrible habit of yours.”

Yeah. I knew.  Let’s face it, after over sixty books, if I don’t know my bad writing habits by now… All things considered, I’ve got bigger problems than the habits themselves!

What was it?  Overcommitment. 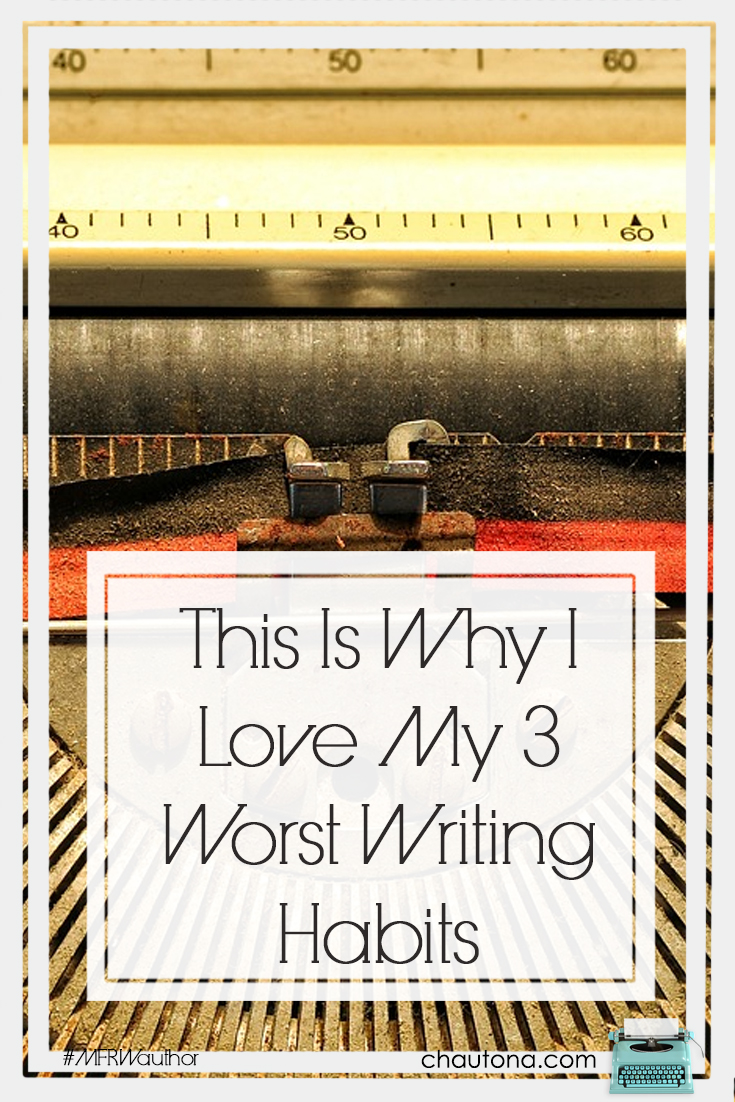 Note: this post may have affiliate links that provide a small commission at no extra expense to you.

I’m terrible about over committing myself.

“Can you help with this project?”  Sure!

“Do you want to join this collection?”  Absolutely!

“Can you move the publication date up six weeks (so you have 2 weeks to finish and edit—and you are only 20k words into the book)?”  Not a problem!

And I mean it, you know.  It isn’t just that I’m overly optimistic.  I know I am.  That’s just an inescapable fact of life for me.  And I like it, frankly. Truth be told, even being realistic is a bit of a downer to me.  I like that feeling that says, “I know I can do more than I think and less than I want.  So I’m going to shoot for the moon.  At least that means I’ll leave the ground!”

In my opinion, that’s not even my absolute worst writing habit.

“Another series?  You have sixty started already.  This is a really bad habit of yours, Chautona.”

Yeah. It is. Sometimes it’s deliberate.  Others, not so much. For example, I wrote Princess Paisley as a gift to a friend’s daughter.  That was supposed to be it.  However, the more I thought about it, the more I wanted to write a “good” fairy tale—one with adventures and struggles to overcome—one with a hint of a happily-ever-after before it even began really.  Of course, I did one more.

Ahem. Yeah.  “One more.”  For the record, I now have half a dozen planned.

For example, take my  Bread and Butter Notes book.  See that singular thing right there?  Yeah.  By the time I finished plotting the first book, I had a trilogy planned.  And the same thing happened with Prairie—and so many more.

Consequently, I have no less than five series WAITING for me to start.

For the record, those are the ones that came to me in an instant.  If I looked at my list, I’d probably find a dozen more.  One of my goals right now is to finish up several of these series so I have fewer “in the works.”  I’m down to just one more Sight Unseen book.  And I am SO thrilled.

But you know what?  Strangely enough, I don’t regret doing it.  Not really.  And that sense of relief won’t stop me.  Why?  Because I write in a lot of genres.  And that’s good for my readers just as much as it’s frustrating.

Why?  Well, one dear gal who keeps me entertained with her cool emails and fun quip in my groups on Facebook really doesn’t like mystery and suspense.  If that’s all I wrote—if I just concentrated on The Agency Files for a few years until I used up all my ideas, she might just forget about me by the time I got back to more Aggie-like books.

Not only that, I love the variety.  It makes me a better writer.  So, yeah, it’s a bad habit of mine, but it’s one I’m glad I have.

And even that isn’t my absolute worst writing habit.  I think this one is.

I hear it ALL the time. “Wait.  In this book, you say that Christians cannot wear anything but red, but now this character says we can only wear purple.  Which is it?”

Yep.  No doubt that’s my worst failing—and it’s the one I love the most.

In fact, people ask me all the time,

And those aren’t even half the questions I’ve gotten.  Some of them I’d answer with a resounding yes!  Others—a definite no.  Many would be best described as, “I don’t know, but I keep studying the Word. I keep looking to Jesus.  I keep praying for insight.”  And still others, I’d say, “Does it matter?”

Consequently, there’s a reason I show my characters believing things that I don’t.

It’s because I know I haven’t cornered the market on Biblical understanding.  Incidentally, even if I had, other people who love Jesus and serve Him daily have a different understanding.

In fact, my goal in writing isn’t to straighten out folks’ theology.  It’s to show how Christians—yes, even those who I think are wrong—live out their faith.  Period.  I show fictional Christians, give them a blessing or a burden, and let them loose, showing what happens when they miss an opportunity, when they fail to live up to their faith, when they triumph over self and sin.

Ultimately,  when they fall flat before Jesus and say, “Fix me.”

Well, I do believe it—I believe that people who love Jesus believe this thing.  And I want to learn from them.  Because if I had to try to count all the times I’d discovered that I was wrong about my understanding of Scripture, I’d be counting for a VERY long time.

I wrote more about it in this post: Why Do Your Characters Do What They Do?

I over-commit myself.  But man, I get a lot done because of it. I have a rich life because of it, and I get to help a lot of people—because I try.

Yes, I have too many series going on at once.  It’s not wise.  It’s rather annoying, actually, but I crave that variety, and I want to bless ALL of my readers  That means making sure that I write more than just one genre at a time.

And, yeah.  I tend to write like a schizophrenic Christian—tossed by every wave of doctrine.  I’m not, really. In fact, I am rather obnoxious about my confidence in what I believe.  But I am teachable, and I do want to understand why others believe what they do.  And then I want to share it.  Because I’m weird like that.

Previous Post: « When Horrendous Traffic Kills Your Chance to Meet Someone
Next Post: What Super Hero Saves the Blogging Day? Mommynificent! »