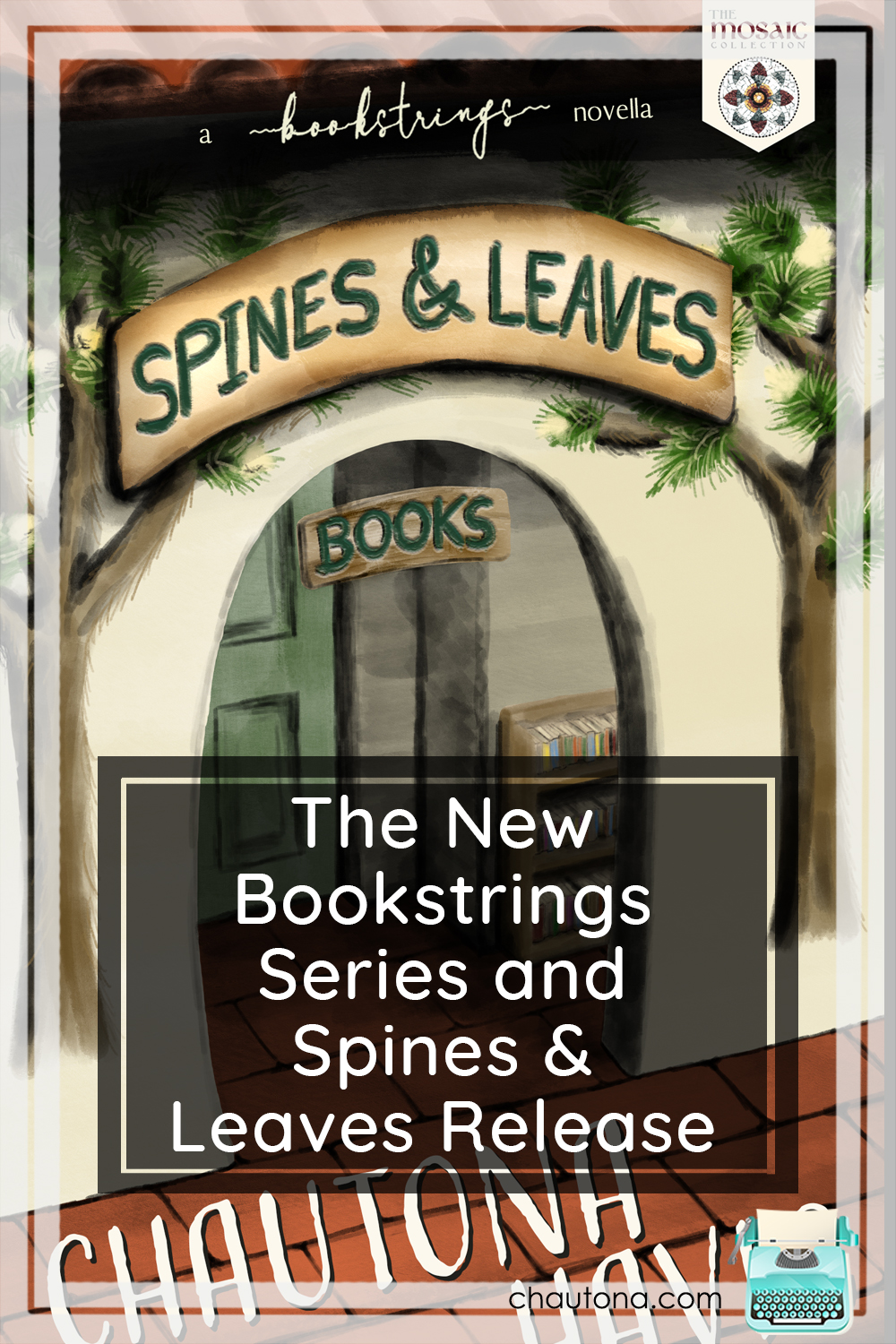 The idea came to me while on vacation a few years ago. I wanted to write a series of books about bookstores—not a single bookstore and multiple books about that, but about multiple bookstores in small towns across America.  My problem?  I didn’t know what the point would be. What connected those books?

Ideas flew at me, and each time, I batted them back.  An online group of small booksellers who supported each other?  No. Maybe a family who had run bookstores for centuries.  That one intrigued me, but then I got another idea for how to use the family thing.

For years, the idea swam free as I cast about for an idea that would really work well with unconnected stores in small towns. Then, an idea bit, and I reeled it in. (Why yes, I did go there and use that metaphor. Yes, I did!)

The movie (probably a Hallmark—it’s kind of their bailiwick) had a familiar theme.  Big bad corporation comes to take over little struggling company. I sat there, the story playing out, and I wondered.  Why didn’t someone have a career in saving businesses from bankruptcy or takeover?

Why couldn’t that be a thing?

The answer, at least as far as fiction goes, is obvious.  Conflict. There’s a whole lot less natural conflict in saving a business than fighting the big, bad corporate wolf. Fiction thrives on conflict and tension.

I can’t recall what I was doing when the two ideas heated up and merged in a perfect smooshing reminiscent of a literary s’more. I just know that one day, I had my series. Actually, now that I think about it, I do remember!

It’s James Michener’s quote about writing.  He said, “I love writing. I love the swirl and swing of words as they tangle with human emotions.” When I realized that those swirls and swings came through the pages of books, I thought, “Instead of heartstrings, they’re ‘bookstrings.’”

With that, the Bookstrings series was born.

After that title and a premise, my main character, Milton Coleridge, (yes, I did that to him!) was born. He’s a small man, late thirties, kind of ordinary in a retro hipster kind of way. A business doctor, he explores the United States with his Land Rover, a travel trailer, and his parrotlet, Atticus (not finch). People pay him tens of thousands of dollars to save their businesses from bankruptcy and/or takeover, and he’s good at what he does.

So when he steps into a hole-in-the-wall bookstore near Joshua Tree National Park and discovers that it’s dying, he’s tempted to stay a bit longer and see if he can help. If he happens to help the store owner’s daughter and the local deputy see each other in the process, well…

Milton gave me the series tagline, too.  One day he just said it. “Books are the strings that tie hearts together.” 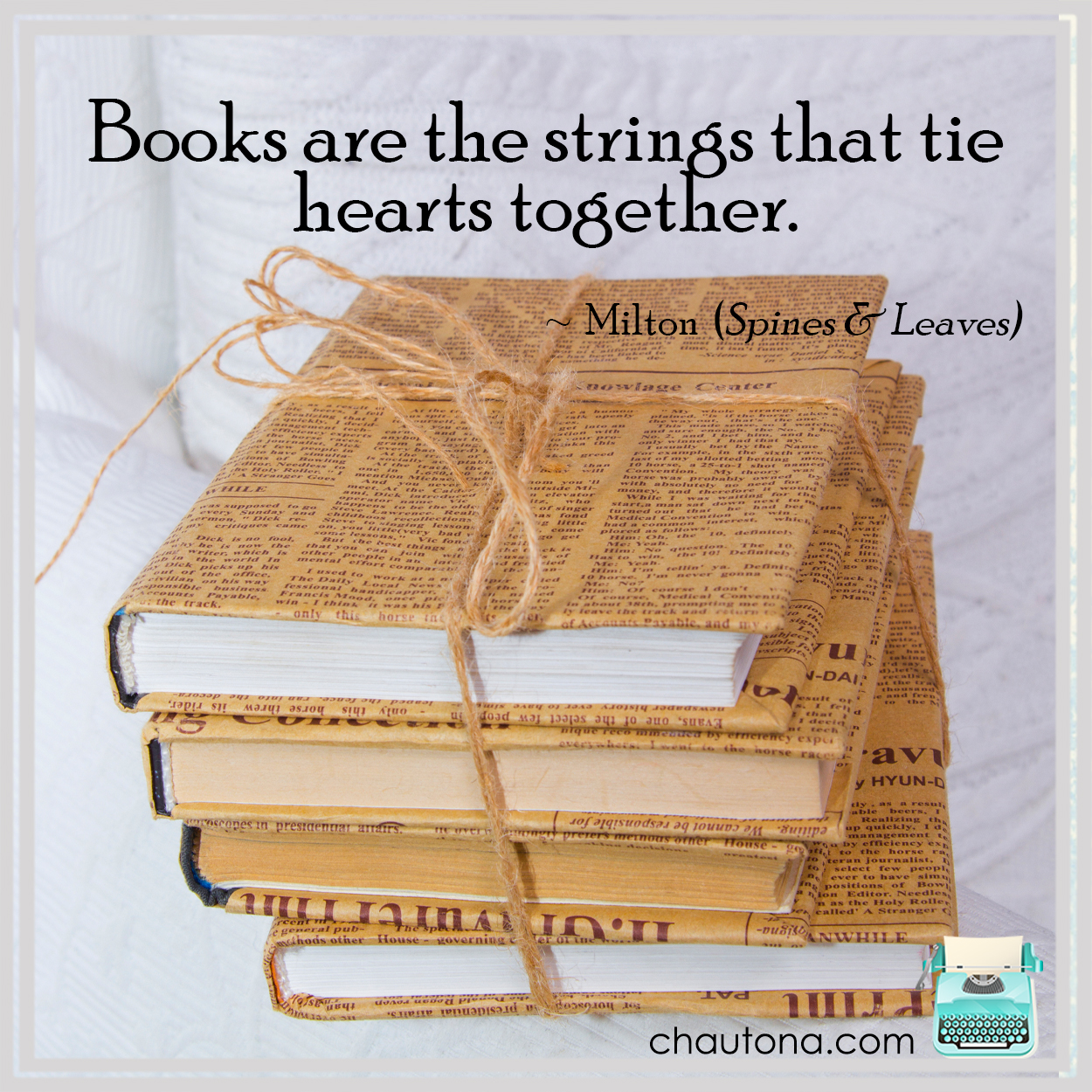 There’ll be five novels in the series and a couple of novellas.  Except for the first and final books, all will take place in real towns across America.  First up: Tamarisk, California.  It’s a fictional town near Joshua Tree National Park on the south end of the park near the real “Tamarisk Lake.”  It’s unconnected, though.  That book is the introductory novella, Spines & Leaves and is part of Song of Grace a Mosaic Collection anthology releasing… TODAY!  Yes, the Spines & Leaves release is today!

I hadn’t planned to do it, but I came up with a fun idea for a Christmas novella, too, so… yeah.

We’ve got one of those. 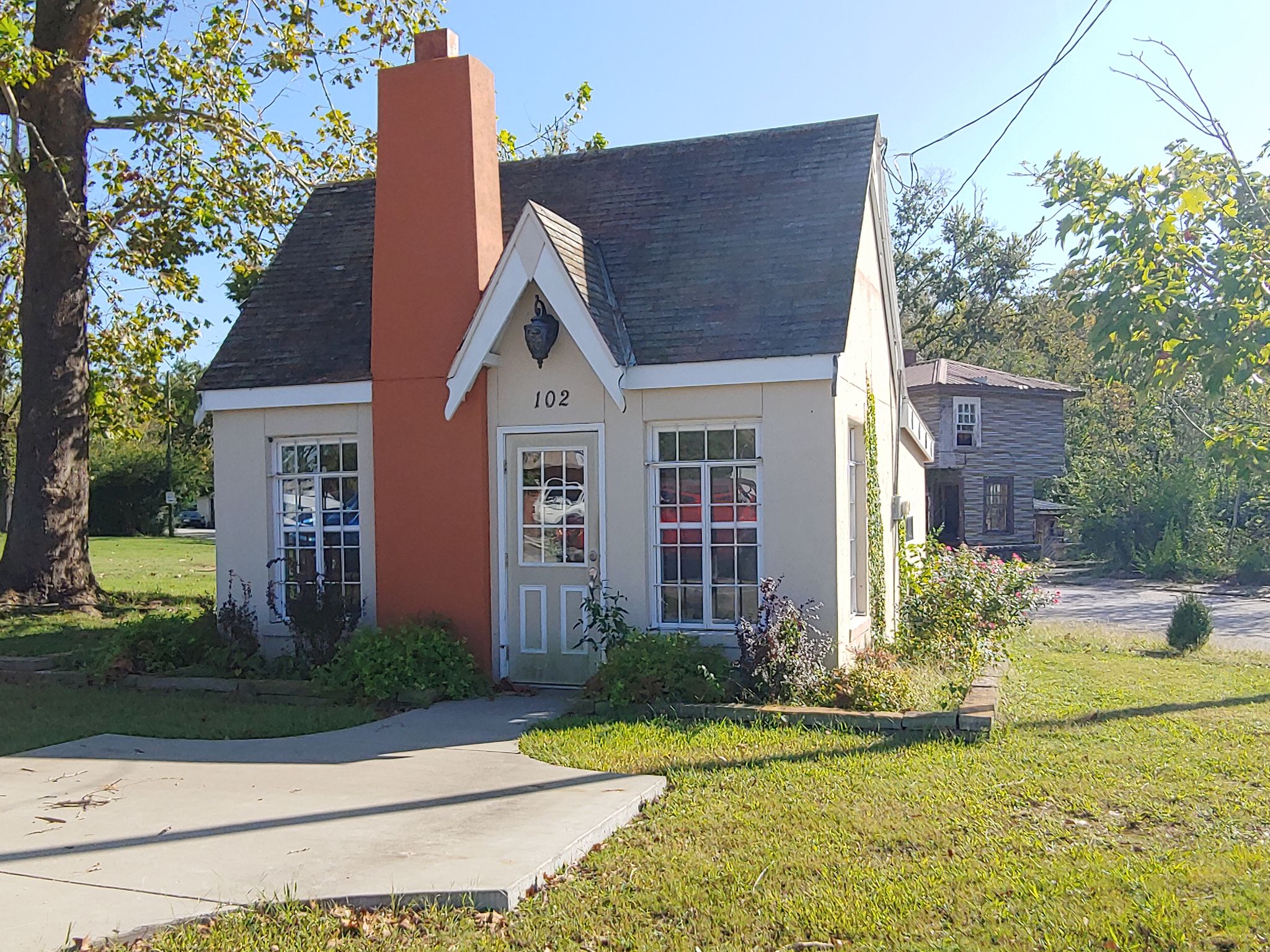 Anyone who read 12 Dates of Christmas and the accompanying bonus short story, “A Noel Christmas,” will recall the little building there in Noel, Missouri that I so wanted to be a bookstore.  There’s just one problem. It’ll never make it. That town can’t support it.  But Milton has a few ideas up his sleeve, so it’s going to be a thing now in Hart of Christmas.

The first full-length novel takes place in Red Wing, Minnesota where my brother-in-law lives. It’s also home of Red Wing Pottery, the more well-known Red Wing Shoes, and… a huge… Bic plant.  Yeah. Milton will not be impressed. You’re welcome, author April Hayman.  The name of that one is Twice Sold Tales and comes out in November of 2022.

After that, we’re moving over to Berne, Indiana—Amish country, but this isn’t an Amish story! There are two more undetermined locations before the series wraps up in none other than my own fictional New Cheltenham.  Yep, Inklings Booksellers is in trouble, and Milton’s here to save the day!  What a guy.

So, I’m going to need a little help.

With California, Missouri, Minnesota, and Indiana in the offing, what two other small (and real) towns should I consider putting books in?  It has to be in the continental United States because Milton has to be able to travel there easily. I’m looking for small, quaint, but not so remote that it isn’t reasonable that it would exist. Leave a comment below with your suggestions, would you?

And meanwhile, I’ve got a fun special going on. Lookie what I have! 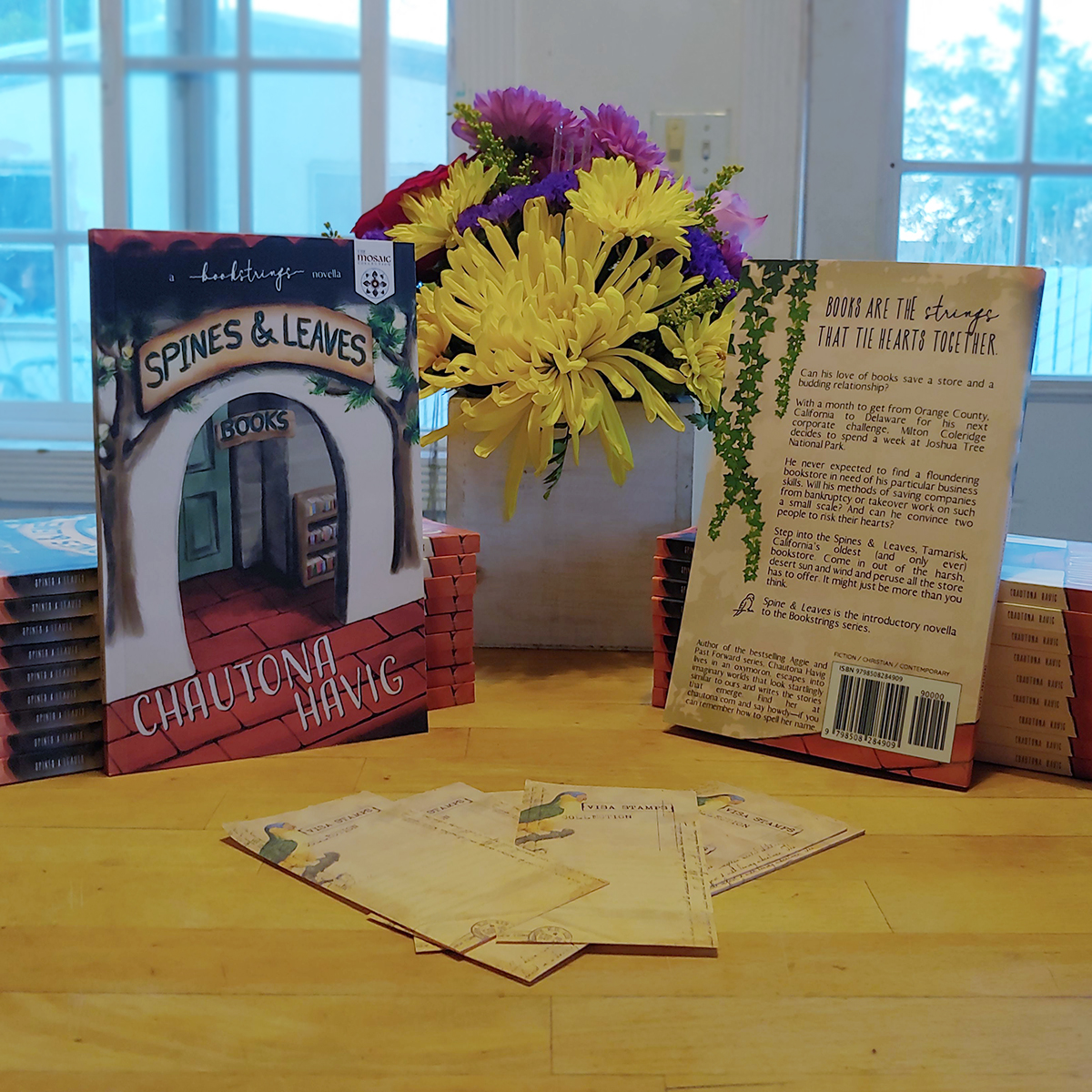 I decided to do a special for the Spines & Leaves release. The moment I saw these adorable notes on Etsy, I knew I had to do this!

I had to do it.  So, I ordered twenty copies of this book and twenty of these little “bookplates” (that’s what I’m callin’ them!).

Note: This is a novella… a short novella, no less. These are skinny, 120 or so page books. But I love this story so much.

This is a limited-time deal for the Spines & Leaves release. I only have those twenty bookplates (and some cute bookmarks!) Once they’re gone… they’re gone!  Get your book signed to a friend, to you, or just signed.  Tell me not to sign it so you can give it to a friend with a special note.  The bookplates are even removable, so if you don’t like it, you can even toss it (but how could you do that to “Atticus”?).

If you’d like a copy, just click the PayPal button.  It won’t let more copies be ordered than are available, so grab it while you can. They are also available HERE but without some of the extra goodies.

And be sure to grab your copy of Song of Grace. I’m sure you’ll love all the stories within its pages.  Available on Kindle, Kindle Unlimited, and in paperback. 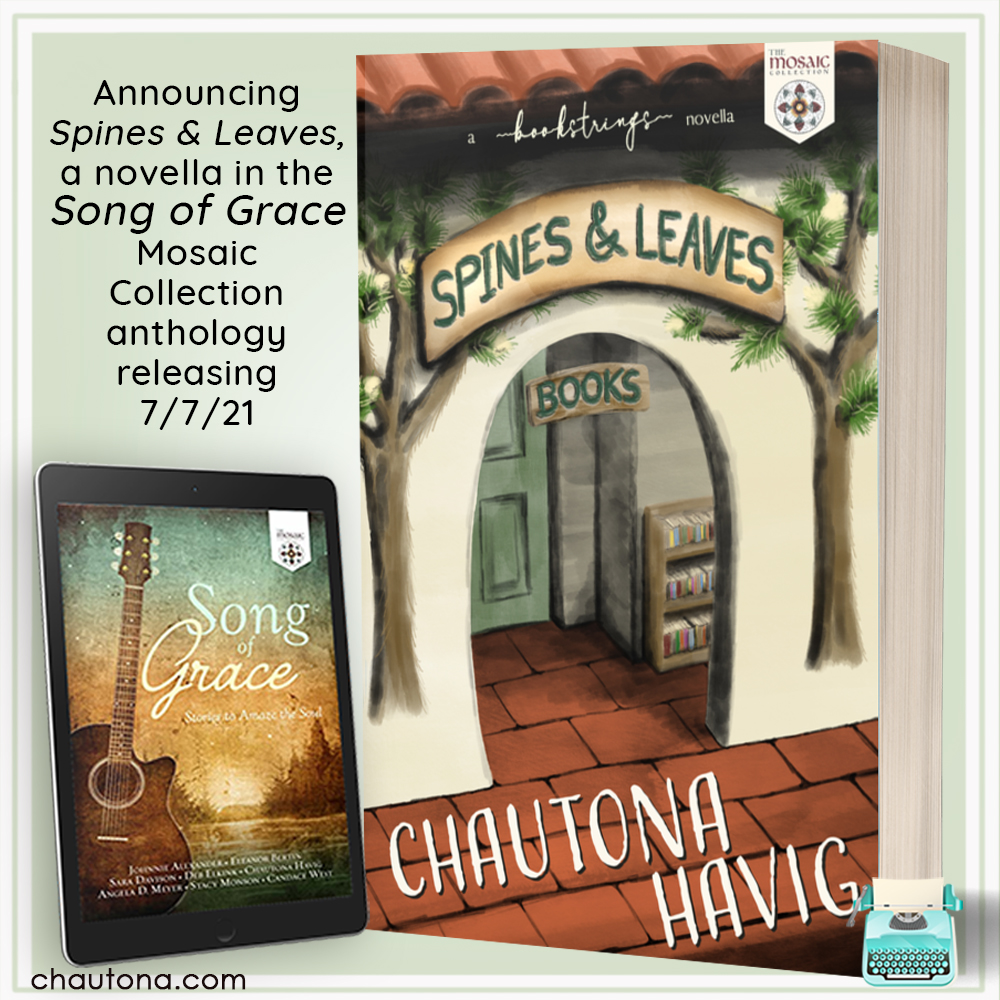 Don’t forget to leave your suggestions for towns below!

Previous Post: « This Unique New Book Will Excite You about Politics Again
Next Post: Is This Author Harnessing the Power of Youthful Passion? »