.Summer on Sunset Ridge by Sharlene MacLaren intrigued me from the moment I read the synopsis. Quakers? I don’t believe I’ve ever run across Quakers in Christian fiction, so I had to try it. See, my knowledge of Quakers is severely limited to Thee Hannah, Friendly Persuasion, and Miss Alice in Christy. Not exactly an expert here, just sayin’. 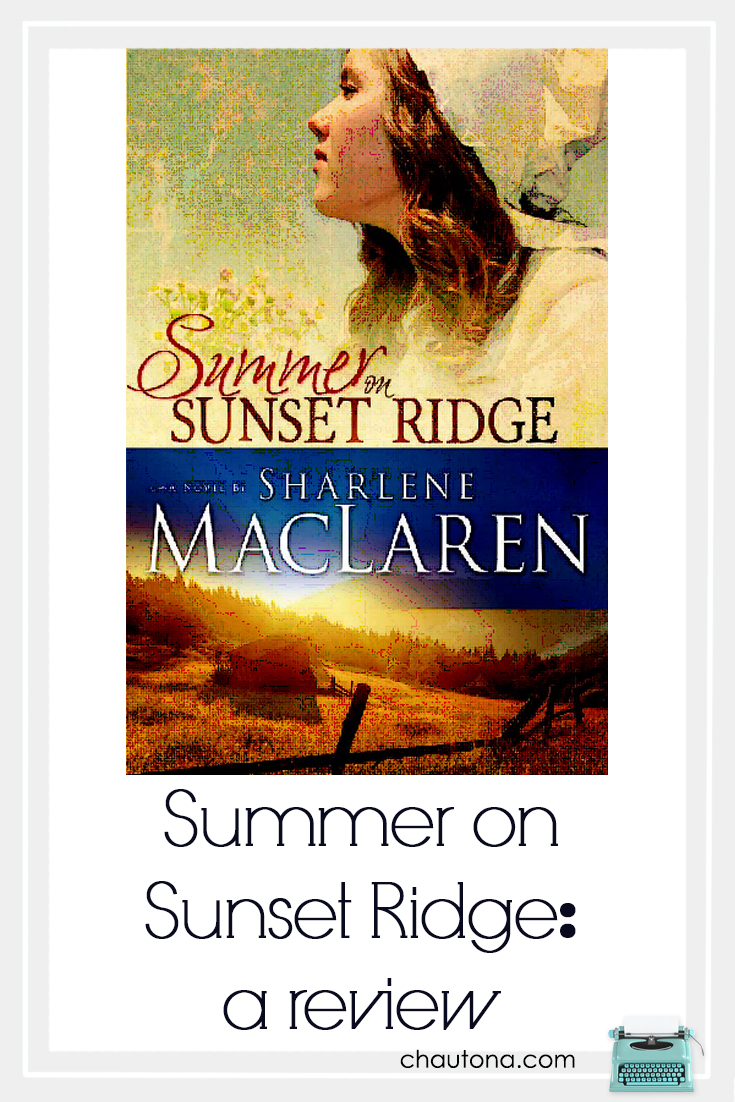 So what’d I think of Summer on Sunset Ridge?

Sharlene MacLaren took several popular story lines, runaway slaves, the Underground Railroad, amnesia, love triangles, the fear of spinsterhood, and somehow wove them into a new story that kept my attention the whole way. I’ll be honest, I wasn’t sure it would. However, to my surprise, I found myself rooting for characters, cringing at others, and kind of hoping that she tells the stories of the rest of the Albright family. Okay, not “kind of”.  Totally.

The characters: MacLaren wrote intriguing, complex characters who are just as lovable and flawed as we all hope to find in good fiction. Rebecca is a lovely blend of submissive daughter and independent young woman, and considering her faith, her independence isn’t really out of character for the time. I really enjoyed the turmoil she felt in reconciling fealty to her parents, honesty about her feelings, and doing what is right even when your heart cries for wrong. Not once did the author skim over the serious temptations facing the characters, yet not once did she gloss over the seriousness of being tempted to do wrong.

Each family member holds a distinct and consistent personality—engaging. I want to know what happens to Levi, Lydia, and Frannie. I loved to see Rebecca’s father grow as a person, and while her mother did grow as well, that change is the only one I found a bit forced. Then again, she does have that sort of personality that would take a long time to come around, but once she did, she’d embrace it wholeheartedly. I think.

The setting: A Quaker farm isn’t that different from an Amish farm, but something about it felt quite different. I can’t decide if it’s because of the period (1855) or if the author fought to show that Quakerism is not the same as Amish. Additionally, showing town life in Pennsylvania during that era gave the story variety and realism that I found refreshing. MacLaren wrote her book with an eye to detail but without excessive description that drags down the pacing.

It helped not knowing much about Quakers. For all I know, the author has every fact exactly correct—or wrong! I don’t know. Several times, however, I was jerked from my reading by occasional modern phrasing both in speech patterns and things mentioned. It was all minor—things that many people wouldn’t know. But when Rebecca pulled out a “skirt and blouse” I cringed. It’s not accurate. They called blouses “waists” back then. It’s where the term “shirtwaist” came from—from “waists” that were made to look like men’s shirts.  But not until just twenty or thirty years after this book took place. It’s also related to the word “waistcoat” which was a word for vest. Blouses were actually “blousy”, which is what the term blouse was for.

I loved the deep, rich, faith-building sections of the book—until they turned preachy. It was the weakest part of the book for me. Instead of natural conversation, as soon as faith was brought into it, we got a miniature history lesson about the Quakers and/or a sermon. Many people, again, won’t have problems with it, but it became weary to read—not because Scripture is burdensome, but because it isn’t! And I felt like the author made it so. I think the author tried to avoid “info dump” sections to share the history of the Quakers and their faith by weaving it into conversation. And it’s a brilliant way to do it. I just found it a bit too “dumpy” to unload it in large chunks of monologue during what was supposed to be dialogue.

Amazon has a five-star rating system. Loved it (5), Liked it (4), Okay (3), Didn’t Like It (2), Hated It (1). This one was difficult. A lot of this book fell into “loved it.” I really just loved the characters and their realness. However, the preachiness and the very modern feel to some of the terms (the faith sections and clichés, in particular, sound so very modern) bumped that down a bit.

If I could, I’d give it 4.5 stars just for originality, great characters, and using familiar “tropes” in a new, refreshing way. Since I can’t, I gave it four stars. If the author chooses to write some of the other characters’ stories, particularly Levi’s, I’ll definitely buy the book!

Previous Post: « To Binge or not to Binge: Is there even a question?
Next Post: Why My Editor Is Losing Hair: & other stuff »