My editor probably doesn’t know it.  But she is.  I do it to her with every book. Let me set the scene.  This is how I imagine things go when she opens that email with the subject line: “Here You Go!”  (That really is usually the subject line.  Just sayin’.) 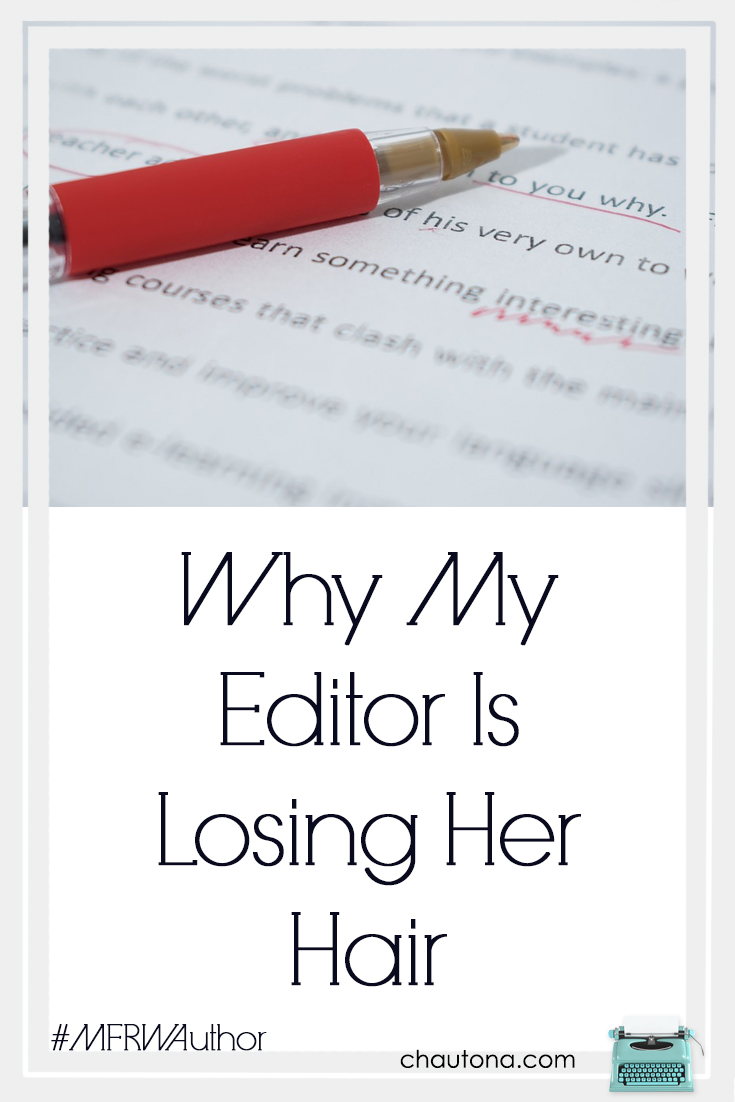 Forgetting the last dozen or so similar emails, editor extraordinaire, Christy, blithely clicked the email in her inbox, downloaded the attachment, and began reading. A strange, unnerving sense of déjà vu washed over her as she read the notes.

Haven’t had a chance to look over it first. Sorry.  Oh, and if you see anywhere that Sally Sue eats peanuts, will you tell me?  I decided on the last page, just before I killed her off with anaphylaxsis, that she’s allergic to them.  Oh, and let me know if there’s anywhere that I just told people, over and over, what a jerk Bobby is.  I mean, I need to show that.  People aren’t stupid.  They can figure that out for themselves.

But as she settled down to the task of taking 95K words and turning them into at least 96K (thanks to Chautona’s most prolific editing error: leaving out words and assuming the world will know what she means), Christy immersed herself into the story

“Question mark!” Christy’s oldest son looked up from his math assignment and stared at her in confusion. “In ma-aaaand you’re editing.  Mrs. Havig really has problems with those, doesn’t she?”

At this point, Christy felt obligated to admit that she, too, often missed the omitted interrogatory punctuation even in editing. “But I got that little sucker!”  (Christy would never say “sucker”, I’m sure.  But this is my story, and I’m going for it while I can.)

A comma here, a dropped quote there, editing went along swimmingly until, out of the blue, a sentence leapt from the page and fishtail slapped her!  She read it twice–a third time.  She read it aloud. “‘Sally’s brain refused to connect with the idea of and what an atrocious start!'”

Before Christy could highlight, note, and move along, her email dinged again. Another email.  From Chautona.  Subject line: Can you insert this between chapters 18 and 19?

What is this weird scene?

Glad you asked.  This week’s blog prompt in the 52-week challenge from #MFRWAuthor I’m doing is titled: Sorry Editor! (my common writing mistakes).

That little ditty, totally a figment of my imagination, but I suspect it’s truer to life than you’d think, was just my fun way to have an intro to my madness!  Here they are, in no particular order.  My common writing mistakes.

I’m terrible about leaving out words.  It’s one proof of why I should never try to edit my own work.  Why?  Well, because when I reread them, my brain puts in all those lovely little words that it thinks it types. I don’t see them gone unless I have about four to six months absence from the manuscript!  Christy gets lots of sentences that look like: “One look her, at the trusting expression on face, and Albert knew he couldn’t hide truth from her—not and retain their open confidence.

There’s also a problem with this whole thing.  Christy, as editor, has to figure out if I meant for the word to be missing or not.  For example, that line is an actual line from Such a Tease. (which went on pre-order today! Check out the BONUS, too!) But guess what? There are three words that are technically missing.  I left one out deliberately.  I did not want “the truth”, just “truth.”  I wanted it that way because I’m not speaking of “specific” truths, but truth in general–truth as an ideal.  Christy has to look at these sentences and go, “Hmmm… which way, which way?”  And then, I suspect, she marks ones she knows just to teach me a lesson about all the other ones I didn’t do deliberately.

For the longest time… oooh ooooh oooh… for the long--wait.  Wrong thing.  Sorry.  Um, yeah.  Where was I?  Oh.  Longest time. Right. So, for the longest time, I couldn’t figure out why so often my question marks were totally missing.  Like gone.  Kaput even.  I spent hours (spread out across months, but still.  HOURS!) trying to figure it out.  I finally remembered one sentence.  I remembered it because I remembered what interrupted me in typing it.  And that’s when it hit me.  I think I end up with so many sentences that look like this:

The mother begged with her very last breath, “Will you just stop it.”

Because I get interrupted.  so I write “…last breath, “Will you just–”  And then I get interrupted.  I go back, see the just, and finish.  “–stop it.”  I’ve forgotten that I started with “will” and therefore it’s interrogatory.  I find a LOT of them in my manuscripts, and the little scene wasn’t a joke either. Christy misses almost as many as I do.  HA! Praise the Lord for advance readers who don’t.

I’m terrible about forgetting to put in hyphens.  It’s strange because I can tell you where they’re missing in everyone else’s stuff, but I just forget to put them in mine.  It took forever to figure out why, but I’ve gotten a lot better about them once I did.  It’s simple, and kind of embarrassing.

I skipped that section of the typing book I used to learn to type with when I was a kid.

Yep! That’s the only reason. I didn’t like having to hit shift and reach up for that hyphen.  I was bad about numbers, too–in the interest of full disclosure and all.

That sentence up there?  It ain’t no lie.  Every single book I write has at least one or two sentences that I get a marked note that says (what?  Don’t know what this is saying…) in the notes.  Usually, it’s just a matter of one of those missing words things.  For some reason, the word left out wasn’t obvious to her like it was to me.  Ahem.  But, sometimes I did that “start to write a sentence, got sidetracked, finished the sentence later” thing and well… it ended up making no sense–like, not even to ME!

So I emailed Christy.  The crazy woman has a  month-old baby and she’s SLEEPING.  Doesn’t she know I have NEEDS?  Hmph.  Anyway, when she gets back to me, I’ll post it here. Because I’m that kind of gal.  Say thanks!  Ahem.  Meanwhile, here’s  list you can guess from. It’ll be like a game!  See if you pick the one she chose.  Here are options (that she is not limited to, so it’s a Las Vegas vulgar sounding dice game shoot!):

There you have it!  Five ways I drive Madame Editor Christy nuts.  And yep, they’re five reasons I’m convinced that if she goes as bald as her hubby, it’ll be all my fault.  Anyone know any good wig companies?

The verdict is in!

Christy sent me one email that said, “missing quotation marks”.  I’m bad about remembering to end with those marks.   Probably that sidetracked thing.

Then a couple of minutes later, I got, “Switching names”.

So… there you have it!

Previous Post: « Summer on Sunset Ridge: a book review
Next Post: Write What You Know: What it really means »