And just how is Speak Now like a fungus, you ask? Well, c’mon.  I already answered up there.  It grew on me.  Not quite literally, but you know.  It happened.  That growing thing. 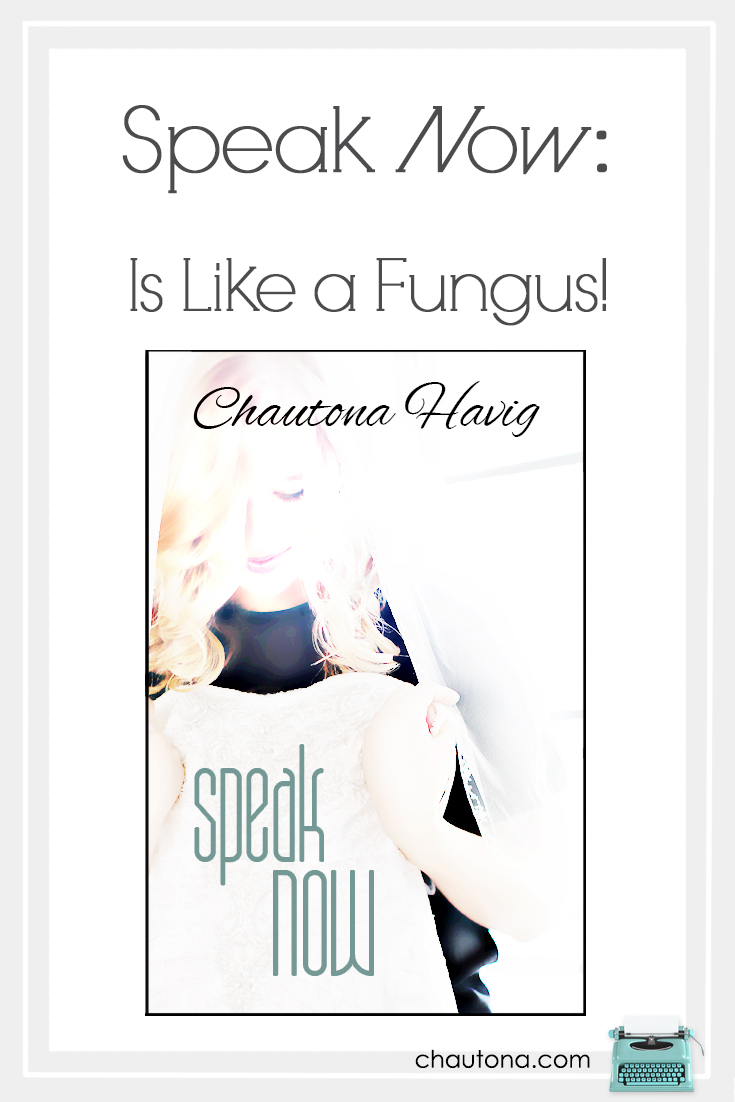 Note: links in this post may be affiliate links, providing me with a small commission at no additional cost to you.

First: a history of the blasted book.  You see, I started writing Speak Now as an exercise in being less dialogue driven.  I tend to do that–use a lot of dialogue in my books.  I wanted to practice showing a story (rather than the verboten “telling”) through action and events rather than so many “words.”  (Yes, I do note the unintentional irony there.  Snort.)

It was originally titled, Gently, and frankly, horrible.  I think that’s part of what clouded it all this time.  But my dear friend, Michele, loved it.  And so I kept writing–and rewriting.  I wanted it awesome–for her.  It didn’t happen.  I thought it was stupid, frankly, and I never intended to publish it.

But Michele kept pestering me.  And Ashley insisted.  Of course, once Ashley threw her .02 in there, I was doomed.

Then, for the past three years or so, I have regretted it.  The book mocked me–taunted me. I hated it. Every time it came up on sale, I told people about it like a good little soldier (Ashley insists) and then assured them they didn’t want to read it.

But as I was going over my Pinterest Boards, I noticed that there were very few quotes from it.  This did not surprise me.  After all, I don’t like the book, right?  But this book does have one of my favorite scenes.  I thought I’d see if I could find one in that scene.  But, I started at the beginning.

Of course, my first discovery was the realization that I actually do like the characters.  I kind of felt guilty for putting them in this book.  Jonathan is such an interesting mix of gentle masculinity and firmness of mind and purpose.  Cara manages to be a “people pleaser” without losing herself in the mix like so many do.  Becca Jacobs-Roth could learn something from Cara in that department.

But the story caught me, too–two people attracted to one another and fighting, desperately, to handle it in a godly manner.  I remember finding it difficult to show that attraction in an appropriate way.

And that’s when it hit me.

Speak Now did exactly what I wanted it to do–just not in the way I expected. This book stretched me as a writer and forced me out of my comfort zone. Honestly, I still wonder what I was thinking when I let myself be talked into publishing it, but after reading it this week, I’m kind of looking forward to bringing out those characters again.

And besides, there was a hint at another book in this one.  Maybe it’s time for that one to surface.  I can see the opening of it now.

A telephone rings.  Trenna answers and once again says, “Look, mister. I don’t know who you’re trying to find, but this ‘agency’ is a wedding planning business, and if you–”

But the voice will break through and say something like, “Just find Mark Cho and tell him Arley needs him.”  A loud noise, a cry… and the line goes dead!  mmmmwaaahaha.  Or something like that.  Maybe it’ll start at a wedding.  After all, that’s where the first call came in.

So, I recant. While it’s not my FAVORITE book, I do like it now.  I’ll forget that. I dare you to remind me that I reread it and liked it.

Previous Post: « Do You Think Jimmy Stewart Will Ever Forgive Me?
Next Post: Conquering NaNoWriMo: How I “Win” Every Year »