Anyone who knows my father knows that “rebel” sounds incongruous with his strict rules and expectations. When other kids wore blue jeans, t-shirts, and “sneakers,” my siblings wore leather soled shoes, slacks (for the boys), buttoned up shirts, or dresses (my sister).  The boys had crew cuts when everyone else in their classrooms had hair lapping their collars.  Dad was stern, direct, immovable.  I saw him as about ten feet tall as a little girl.  I doubt he’s more than 5’9″.  But thanks to his influence, I was definitely a rebel in the making. 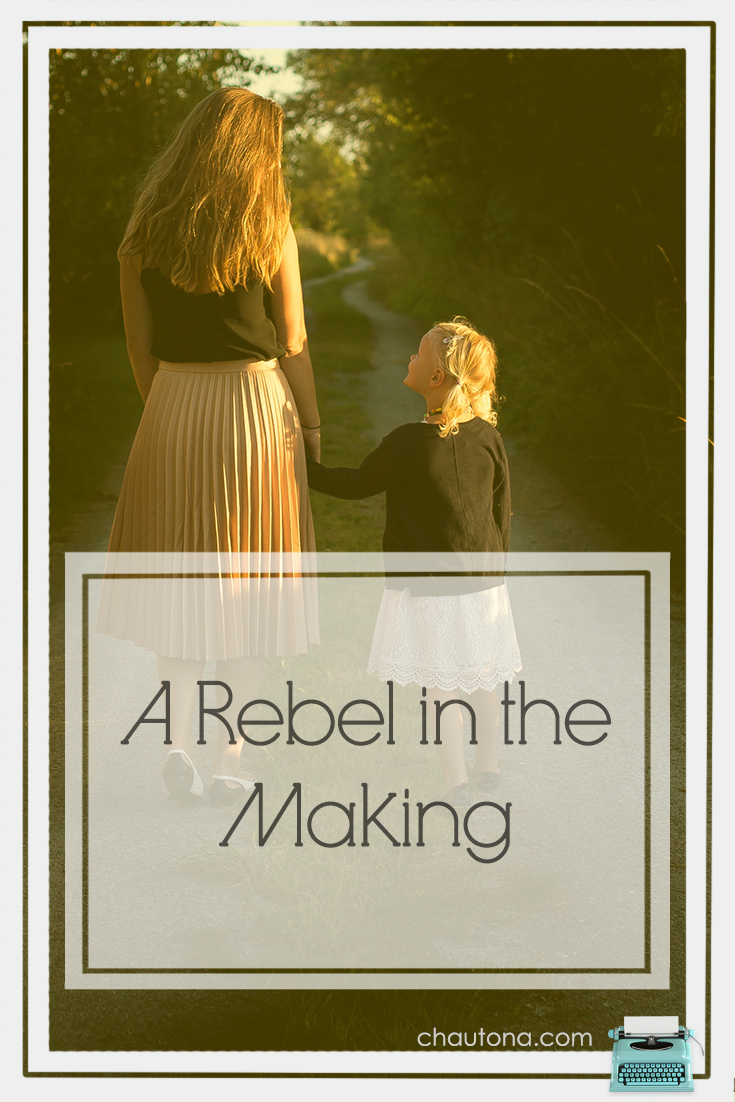 (links in this post may be affiliate links and as such, I receive a small commission on purchases at no additional cost to you.)

My parents had rules–strict ones.

Meals were simple.  They served me my food on the plate.  Didn’t matter what was on that plate, I was expected to eat all of it.  There never was much, but there was always a bit of each thing served.  Liver, onions, and bacon?  Eat it.  (Yum!).  Cow brains?  Eat ’em.  (not so yum…. texture is pretty gross unless mixed with scrambled eggs). Heart, sweetbreads, snails–we did it all.  I ate it all.  I ate it because it was served to me.  They’d help me choke anything down, but I had to choke it down.  After that tiny bit of food (really small servings, people), I could get more of whatever I wanted.

Proof that Dad was a rebel #1.

In the late 70’s and early 80’s, we heard often about “the starving kids in Africa.”  Parents told their kids to clear their plates because of those hungry kids.  I never understood why.  Any kid knew that stuffing food into himself so it wasn’t wasted didn’t help that other kid at all, and it certainly never engendered gratitude in any kid I knew.

My mom used to say, “Okay, the starving kids in Cleveland would love to have that crust.”  It was her way of saying, “Be careful not to take so much next time.”  Why?  Because once I ate the required allotment of food, anything else I took was my choice, and I didn’t have to finish.  My father was a societal rebel on that score.  He’d say, “Why teach someone to eat food their body doesn’t need in the name of reducing waste?  All it does is teach them to overeat.”  I never did learn the art of “stuffing myself” like a turkey on Thanksgiving.  I can’t do it.  Never could.

Proof that Dad was a rebel #2.

Dad was an educational rebel, too. A blue-collar worker who didn’t make much money, he managed to provide a private education for me from second grade on. As a kid, it was just “what we did.”  As a mom of nine, I see the sacrifice they made. When the schools (that he paid an arm and half a leg for) didn’t do a good enough job in his opinion, he supplemented in afternoons and on weekends. When our little Christian school in Ventura closed during the wake of the political crackdown on these “illegal schools” (hogwash), he kept me home.

I did half a year at our kitchen table in 1982.  In the early half of 1984, we moved out to the middle of nowhere (otherwise known as Landers, California) and again, for half a year, I did my schooling from the table, the couch, or my bed. Dad refused to put me into schools he considered inferior to what he could provide himself.

Proof that Dad was a rebel #3.

He never wore seatbelts. For most of my childhood, that wasn’t a big deal.  It wasn’t the law back then.  Mom wore them all the time.  Dad never did, and I was left to choose.  I was a bit of a diplomat in those days.  Okay, I was a fence-sitter who liked to think of herself as a diplomat–much more romantic than a “wishy-washy fence-sitter”.  I wore it about half the time and ignored it the rest.

Once I began driving, I wore it all the time.  Even when it became law, Dad didn’t recognize the law as being Constitutional (doesn’t believe the government has the right to dictate what doesn’t injure others) and opted out of it. If he got a ticket, he paid without protest.  And continued not wearing it. Again influenced by both, I was a rebel in the making–soooo rebelious!  😉

His not wearing one likely saved his life in a terrible rollover once.  He was thrown from his truck rather than being crushed when the driver’s side was bashed in as it hit a giant boulder.

What does all of this have to do with anything?  Who cares if my dad is a rebel?

Well, people often ask if Willow from Past Forward is like me, my mom, my kids.  To a small degree, I’d say her directness and unwillingness to be stifled into some kind of “box” is definitely a bit like my mom, and therefore me. I’m a lot like my mom sometimes.

They then ask about Kari.  Kari is most like my Dad.  I didn’t know it when I wrote the books. But when I looked back later, I realized that so much of her approach to life, to education, to living, is Dad.  Kari was a rebel, too.

When attacked in one of the worst ways possible, she refused to be a victim.  It’s kind of ironic, because, like most people who refuse that moniker, she behaved just like one. She let the oppressor win when she ran away from life and built a new one.

But that solitary life, that reliance only on self and the Lord, that desire to buck the system and be whoever she chose to be, that’s Dad. Had he ever thought of it, I would never have entered a school.  I suspect my education would have been much like Willow’s. In fact, my pre-schooling education was. Mom taught me how to read using Little Golden Books and Nancy Drew.  Dad taught me to tell time by teaching me the 5’s times tables and using the clock face. Mom taught me to tie my shoe by showing me every single time I asked and then one day refusing to take me to the store until I tied my black and white saddle shoes all by myself.  I was four.

You know, I don’t have many regrets in my life.  It’s not that I think everything I did was so perfect; it’s that I did my best with what information I had, and trusted the Lord to guide and fix what I botched.  But one thing I would do over again. If I got pregnant today, anyway, I would definitely give baby ten a “Willow education.”

P.S. That is not a pregnancy announcement.

Am I crazy even to consider more Willow in the future? What do you think?  And who knew I was a rebel in the making thanks to dad?