The post appeared in my feed. Just a short story about how my friend’s mail guy had a Monday Moment and took out her mailbox—splintered post and all. She posted with just a picture and a comment that read something like,

“Pray for our poor mail guy. He’s having a tough day today.”

Followed by cute hashtags, of course. Things like #MondayMadness or whatever.

Then it got interesting. Someone asked what happened. My friend said she thought his mirror caught the box and just ripped it right off.

And what was just a simple request for prayer became a slew of unsolicited and unhelpful advice.

“You need to report him!”

She tried to explain that she hadn’t posted to rant. She wasn’t trying to blast the poor kid. Being human and having made mistakes herself, she just wanted folks to pray for a kid who had a rough day and needed a bit of encouragement.

Don’t know about you, but I see it every day.

The post appears. “Should I be antsy and unable to sleep at night if I take B vitamins in the morning?”

“B vitamins are great for energy. Try taking them in the morning so you have the energy all day and can sleep at night.”

Look, I get it. People sometimes misread something. We’ve all done it. But I have to ask: 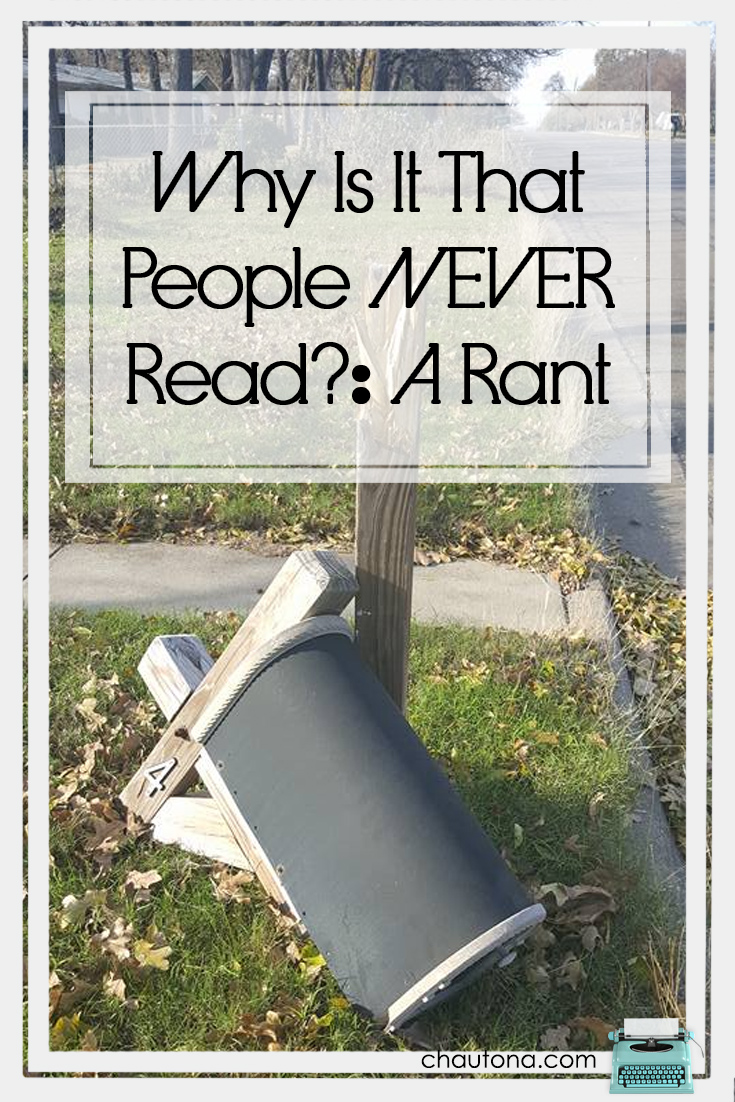 Why Is It That People NEVER Read?

I’m sure it’s been a problem since before the internet, but I have to say, I have noticed it more since being online. Message boards—that’s where I first noticed. Someone would say that her husband wouldn’t ever eat rice or beans in any form, but she needed to find meatless meals to stretch the food budget. I guarantee you half of the responses would include rice and beans.

Facebook isn’t any better. I see it almost every day. You know, it reminds me of that verse in Proverbs 18—

He who gives an answer before he hears, It is folly and shame to him.

Because, you know, these folks do look rather foolish when they answer with the very thing the person said wasn’t a factor. “What movies are there about fairy tales that aren’t done by Disney?”

“Oh, you want to check out all the Disney princesses. They’re all well-known fairy tales.”

Of course, with my love for the book of James, I also can’t help but throw in James 1:19 here:  This you know, my beloved brethren. But everyone must be quick to hear, slow to speak and slow to anger;

“Swift to hear. Slow to speak.”

Those are important words.

Basically, we need to listen.

Period. We need to focus on the words someone has said (or written). Pay attention.

Too often we’re doing the opposite—formulating our response based on a few keywords as the person began to speak. We answer what we think someone said because we spent the whole time they were talking coming up with our own 0.02.

And, of course, I can’t help but wonder…

Do I do that with God? *don’t answer that*

I mean, He’s spoken. The Word is there. Laid out for us. In black, red, and white. But we’re so busy spewing our own opinions about things that we only take a few words, grab onto them, and formulate entire life plans based upon words we like instead of the whole counsel of God—the entire Bible.

Forget that. Half the time we don’t bother to read a whole passage. We’ve created entire theology systems based on pulling a few words out of context and saying, “See! This is what God wants for you.”

Is it me, or does that sound like answering before you hear all of the story—like “not reading” the whole thing before coming up with a solution? Or, in other words, like seeing that the mail guy knocked over a mailbox so that must mean this post is about what an idiot he is and urging the box owner to demand restitution from the Post Office?

What’s the solution? I don’t know. But I do think one big key is knowing the Word—all of it.

I’ve been doing this Bible in 90 Days Plan.

It’s tough. Really tough. We’re talking about fifteen chapters a day—give or take. It’s a lot to read, but I’m seeing things I’ve never seen before. And one of the things I’m seeing is the big picture.

So often we dig down deep into a verse—a word, even. We want to extract every nugget and morsel from the Bible that we can. And that’s a good thing!

However, when we do that, we tend to get tunnel vision—forest-for-the-trees syndrome, as it were. Reading it fast means you don’t have time to dig deep, and it shows things that you miss at other times.

Reading like this also shows everything in context. I’m seeing the whole context of the law. Not just the rules and the sacrifices. I’m seeing God calling His people to holiness—one they’ll never achieve without a Messiah to save them. Without Jesus.

And we’re called to that same holiness today.

“Be holy for I am holy.” And there’s only one way to do that. Lose ourselves in the Word—to let it infuse us until it is the first thought in any situation.

How beautiful would that be?

I feel a new book coming on. Taking what Dean learned in Corner Booth and expanding it in a new way… all from reading the Word.

Then again… Madeline is starting to do this in Fine Print. Maybe it’ll take off more in there. We’ll see, I guess.

Meanwhile, I’ve got fifteen chapters waiting for me. And, well, I need to go reread this post over on Facebook before I put in my penny’s worth. If I’m not careful, I’ll end up suggesting my friend get a post office box to save herself the hassle of reckless mail guys or something.

And wouldn’t that be rather ironic after this post? Annoying… and ironic.

Previous Post: « What Happens to Your Life When the Word Is the Standard
Next Post: More Unlikely Mentors & Their Incredible Lessons »