Air raids. Bomb shelters. Plucky British dressing their shop windows when the building next door is bombed out. The French Resistance. Americans who would never otherwise have the chance to see the world, fighting alongside the world against heinous crimes disguised as war.

What is it about these things that captivate our attention? Why are we so fascinated with shows like Foyle’s War or the recent one I just saw, Land Girls?

They’ve been called “The Greatest Generation,” and it breaks my heart that we lose more and more people from it every year. I don’t know if we’ve had such patriotism, such “sticktogetherness” since those war days and the years following.

So, is this another political rant against those who don’t show enough respect for our country and what it’s supposed to stand for? Nope. Sorry. You’re not going to get my political views here.

I can almost hear it. There’s a collective question.

So what do you mean by, “The Greatest Generation Is Found in Under Fire”?

Just that. I read a fabulous book this week. Under Fire by Linda Matchett. When Celebrate Lit offered the chance to read it, I put my request in immediately. I mean, c’mon! My favorite era? Christian fiction? What’s not to love? (and please forgive my title… I just had to play with it!) 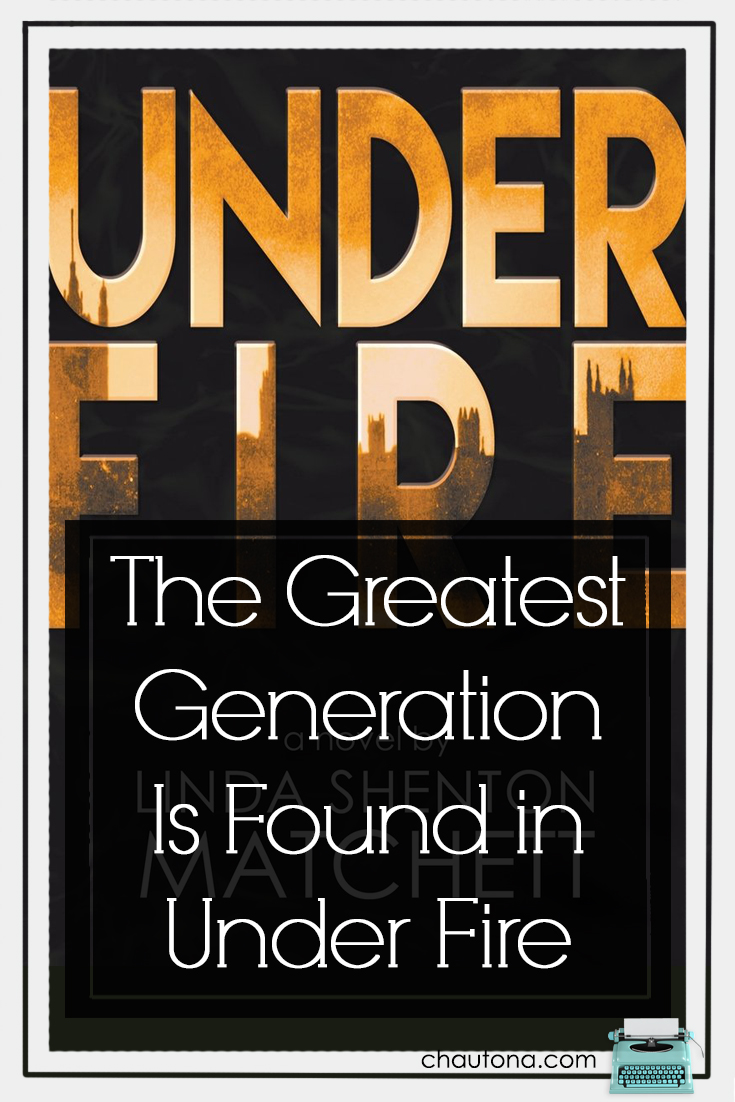 Note: links in this post are likely affiliate links that provide me with a small commission at no extra expense to you. Additionally, I requested a copy of this book from Celebrate Lit and they provided it. I chose to review the book.

What I thought of Under Fire

Captivating. I’ll be honest, I didn’t think it would be at first. I could tell within a few pages that I’d like it, but something held me back for a while. It wasn’t the writing, or the story, or the characters—all were wonderful. But I still felt myself holding a piece of me apart from the book.

And then there was a small patch I like to call the doldrums. I don’t know what else to call it. It didn’t drag, it wasn’t slow or boring, but more like the eye of the storm—eerily calm as it set up for the next onslaught. And boy, that came hard and fast.

But what held me back? I can only call it seriously good writing. For the most part, the book was well-written. In the beginning, there were bits that bothered me, but Matchett is a better writer than most. But no, where she shone most was so subtle, I almost missed it.

The main character, Ruth, spends the book fighting against the Lord—holding herself back from Him if I may. And in doing so, Matchett skillfully kept me in the story while holding me back from it—all at once. Seriously impressive writing there. Maybe no one else would be affected that way, but I was.

Here’s the skinny on the book—the best and worst.

Characters. She wrote honest, relatable characters that made me love and hate them (as I should) and all without making anyone too perfect or too evil. Ruth, in particular, has some serious flaws and virtues that both work together and clash at the best times. Her flaws are real and keep her from becoming a “Mary Sue.”

Writing. For the most part, she has some strong writing skills and she uses them well.

Inconsistencies in style. In one part, inner thoughts are shown in italics. In other places, they’re left with the regular narrative, and a few times ones in quotes appeared to be thoughts instead of speaking to herself. Now, I received what I assume is an advance reader’s copy, so this may have been addressed in the final document. I did not doc stars for it because it didn’t change my opinion of what I thought of the book. I only mention it because I know it really bothers some people.

God’s pronouns not capitalized. Honestly, this is the one thing that irked and jarred me the most. I know not everyone does it. And, let’s face it, it’s becoming less and less common in some circles. But when I see God referenced as “he” and not “He” I start looking for other characters. When I see Him addressed as you and not You, I wonder who I missed.

Agenda. I can see that Matchett is trying to show the prejudice against women working during the war and the harassment they received for it. And, I get why. It’s called reality. Putting it in there makes sense. But at times the stupidity and resistance of almost every male became a bit like modern husband/father bashing—where the guy is just too stupid to be taken seriously—it just became cliche for the book. Weird to say that, but it was.

And one picayune one…

The cover.  Told you it was rather persnickety. Look. It’s a GOOD cover. However… it feels modern–current.  It doesn’t feel like I’m going to escape into a WWII novel. So if that’s what I was looking for?  I guarantee you I wouldn’t have picked it up.  And on the flip-side, if I was looking for contemporary suspense… well, I would have been disappointed. At least until I got into it. *whistles*

But those minor flaws, and really, the second one isn’t all that minor for me, didn’t change the fact that I loved the book. I loved Ruth’s journey. I loved her brother, her parents, her friends, the new friends she makes, and her dogged determination not just to get “her story” but to find the truth. Frankly, if they made this book into a movie, you’d really need to get into The Doctor’s TARDIS and go back to the 40’s so Rosalind Russell could play Ruth. Because I see Ruth as serious competition for the reporter in His Girl Friday.

Previous Post: « When You Live in the Desert, They’re ALL Seasons in the Sun
Next Post: The Deadly Proof Is in the Reading Pudding–It’s a Winner »