Or: The Lessons Learned in Tarnished Silver.

Five years ago I released a book on our silver wedding anniversary. Tarnished Silver. Though it wasn’t “our story,” I did put certain elements in the book that were influenced by or directly ripped from our lives. Things like the “cattle drive” feel of a Vegas wedding and “Dr. Dave” and his ring ceremony.

Then, the other day while I was reflecting on the fact that we’re just days away from year THIRTY… I decided to do two things.

First, I decided to postpone the Sand & Mistletoe’s release. You see, every year on Black Friday, I release a Christmas novel. I see it as a great way for folks to relax after a long trip to somewhere for Thanksgiving or days of cooking… or a crazy morning of shopping in the freezing cold!

But… getting it done right was going to be a stretch, and since this year’s novel is mostly loosely inspired by our lives (although a few elements are actual events), I decided to postpone it for a few days. You’ll see it live on Sunday.

Anyway, back to this week’s topic, also inspired by Tarnished Silver.

As the world’s most unromantic person, you might assume that I’m speaking from experience on how to destroy romance in marriage, but I actually am not. I mean, technically, it’s not that I don’t appreciate romance at all—I just define it differently. I’ll never come home to roses from my husband. It’s not going to happen. Some people think that’s terrible, but I don’t.

Because while he may not be one for gifts or sentimentality, he does all the laundry. All of it. That, my friends, is my idea of romance! When the kids were little, it wasn’t dates and diamonds I craved (we never dated and I don’t like diamonds!). No, my husband knew the three Ds to my heart! Dinner, dishes, and diapers!

Some say I should really give traditional romance a try. And maybe they’re right. I don’t know. The problem is, I don’t think either of us has a clue how to do something traditionally romantic and be authentic at the same time.

However… after writing Tarnished Silver, I do know what I could do if I wanted to destroy romance in my marriage! 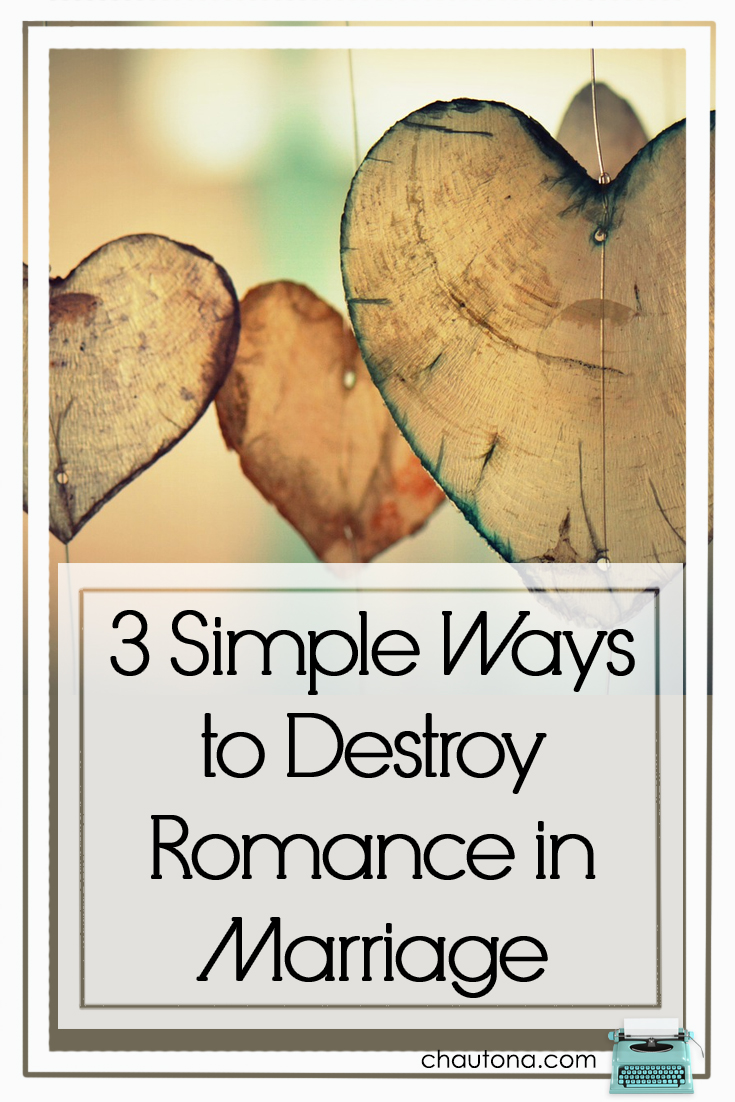 Seriously. It sounds so cliche, but it’s true. Audrey and Zain could have avoided twenty-five years of misery and kept that initial romance in marriage alive just by communicating.

The thing is, communication isn’t just saying words. By just “speaking your mind” or trying to “explain” you can miss out on one of the best ways to communicate. Listen.

So, if you want to be sure to destroy romance in your marriage, don’t communicate. Just talk… and never listen. Don’t hear what they say. Don’t try to hear what they don’t say but show.

Seriously. Communication is one of the best ways of ensuring romance stays alive, so whatever you do… if you want to kill that romance… don’t communicate.

(Song of Solomon 4:3—even in this book chronicling some serious romance, speech is mentioned.)

Again, rocket science, right? Now, most married folks actually spend way more time together than Audrey and Zain did, but that’s not to say that it’s enough. If you want the romance—do it. Spend lots of time with each other investing in each other. Otherwise, go your own ways and don’t actually be together.

Do you remember back in the eighties (okay, some of you don’t, but work with me here)? During the eighties and early nineties “quality time” was the buzzword. Parents were encouraged that it wasn’t how much time you spent with your child it was how that time was spent.

There’s a reason we don’t hear much about it anymore. It’s not that there isn’t some value in ensuring that when you are intentional with how you spend your time with people you care about. Of course, there is. But just being is enough, too.

Again, just stay away from each other. You go your way. He can go his.

(Ecclesiastes 4:9-12—Is there a better picture of being together in marriage?  I just love these words even more, when I think of them in relation to marriage!)

3. Don’t seek the Lord—both individually and as a couple.

Of all the mistakes Audrey and Zain made, not seeking the Lord is exactly what killed that romance—from day one. They had love and even passion. Romance, however, zippo.

Why? They “wisely” decided that they couldn’t seek the Lord and keep that romance dead, of course! *removes tongue from cheek—OUCH!*

But no, really. Guys? I’m going to throw this out there. I’ve never heard a girl or woman say, “It’s soooo not romantic when he wants to pray with me.”

Um, there’s a reason that Lauren and Cassie from The Vintage Wren had an agreement about no praying and Bible study with guys they aren’t committed to yet. It’s attractive. Attraction is one of the first steps to romance! Just sayin’.

But romance blooms out of more than just “spiritual togetherness.”

Have you ever heard someone say, “If you want to learn to love someone, pray for them ‘without ceasing’?”

There’s a reason for that. Prayer and other forms of spiritual investment in the lives of people you care about stirs emotions. Emotions beget connections. Connections, when properly nurtured (you know, by spending time together and communicating) beget… you got it! Romance.

(Psalm 34:3—every time I read this verse, I think, “Wow, if that isn’t the most romantic Biblical verse ever written, I don’t know what is.”)

So, learn from Audrey and Zain.

If you want to kill the romance in your marriage, there are three simple ways to make that happen. Stop communicating (especially that little-used and oh-so-powerful communication tool called listening), stop spending time together (both quality and quantity), and stop spending with the Lord—together and apart.

You can’t hope to destroy a relationship if you do things to nurture it.

Don’t know what I’m talking about with Audrey and Zain?

Well, good news! You can read their story (and bits of my story, too) in Tarnished Silver.

Hope you had a lovely Thanksgiving and I hope your upcoming Christmas season draws you even closer to the Lord as we celebrate the best Gift ever given. Jesus.

Previous Post: « 3 Excellent Things I found in Strategem
Next Post: How My Heart Attack Sent My Husband to the ER »