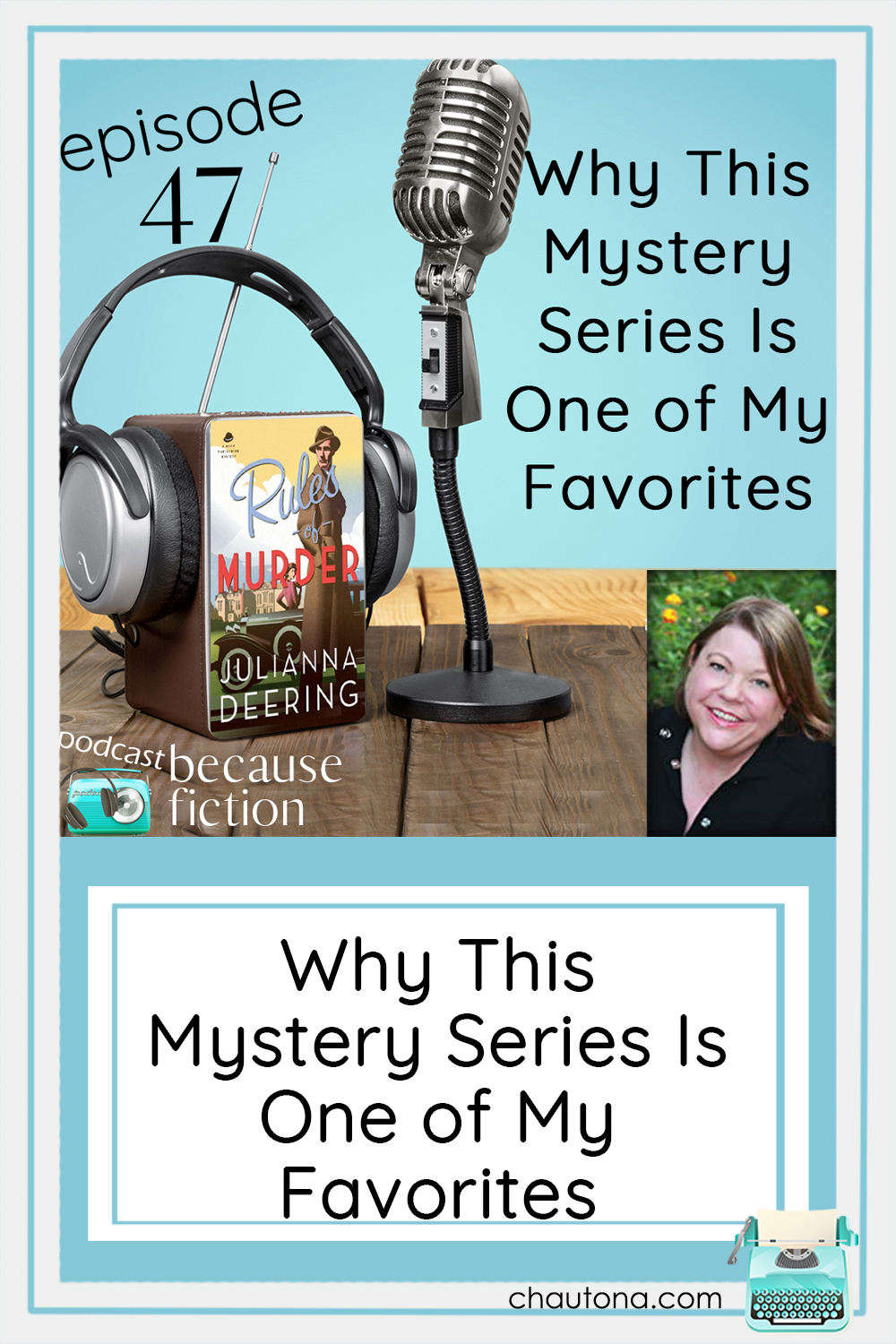 Mystery is probably my all-time favorite genre, and those from the “golden age” of mystery are the most wonderful. So, when I found this series of six mysteries set in 1930s England that reads like those classic mysteries with an infusion of faith, well… how could I resist?

While all books have some element of “mystery” to them, mystery as a genre is a very specific sort of book–one that often is confused with a couple of others, namely suspense and thriller.

Quite often, in groups and conversations, when someone asks for a mystery recommendation, the majority of suggestions will actually be suspense novels or thrillers.  Therefore, first I wanted to clarify what these genres are and what defines them.

A “mystery” is a puzzle for the reader to solve along with the protagonist (usually a detective of some sort). While the mystery genre has many subgenres–cozy, noir, detective, amateur sleuth, etc.–the key element is always that puzzle.  From Sherlock Holmes to Agatha Christie, Nancy Drew to Mrs. Pollifax, the authors and characters vary as much as the storylines.

While suspense may involve a mystery and vice versa, the key element of a suspense novel is emotion. The reader usually knows that the protagonist is in danger before the protagonist. I.e. woman in a white nightgown investigating a sound from the basement. We scream at her not to go down there–to get out of the house!  Even when the character realizes they are in danger, some decide to confront it–to overcome the evil.  This is when suspense turns into a…

The difference between suspense and thriller is that not all suspenses include someone taking on the antagonist. Often, they’re trying to figure out who they can trust and who to run from.  In a thriller, running is only a temporary solution to regroup so the character can take charge again.

Many books in a wide variety of genres have some elements of all of these, which is why I think some readers become confused as to which is which.  A sweet romance has some suspense.  When will he finally ask her out?  When will she quit resisting…?  All the stuff.  The mystery might come into play if it’s a secret admirer trope.  And, of course, if there’s some stalker Mr. Hero is probably out to stop said dude. This likely makes it more romantic suspense, because I doubt both protagonists are out to stop the dude. Usually one or the other is running.

And these distinctions are important when you’re writing a mystery series… or reading one!

This week’s sponsor is Liz Tolsma’s The Silver Shadow.  Part of the True Colors Crime series, this novel is set in Colorado in the year 1900 and features a young woman out to prove herself as a reporter.  A local officer isn’t as convinced of her story as she is, but things begin looking pretty sketchy. 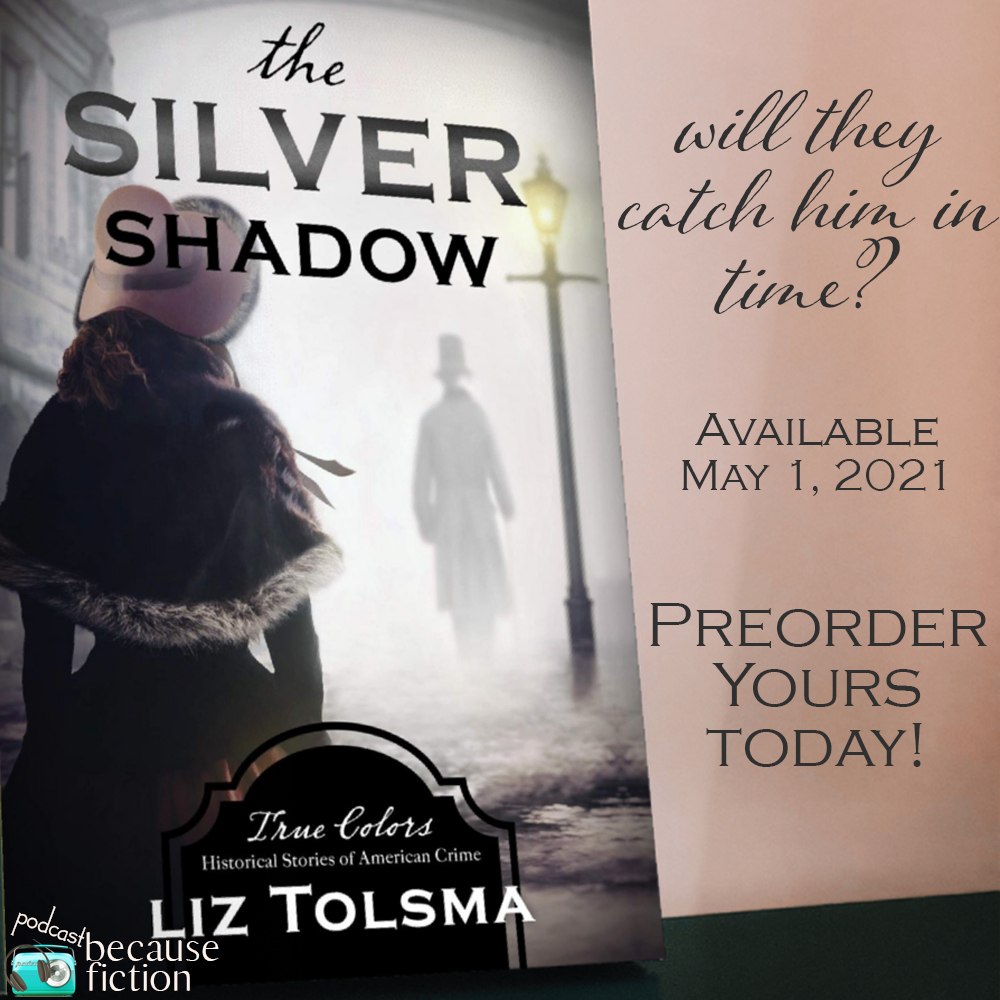 This book releases May first, so instead of a bouquet of flowers on your door, how about preordering a bouquet of words for your Kindle!  The book is on preorder now and I, for one, can’t wait to read it.

I’ve reviewed Liz’s other books in the series. You can find those reviews below:

Additionally, Episode 9 of The Because Fiction Podcast features six of these books, including the first two by Liz Tolsma.

Why This Mystery Series Is One of My Favorites.

As I said in this review, I found this series at the perfect time and quite by accident. With characters who are likable, flawed, and not too hackneyed, the Drew Farthering books have a lot to offer any lover of classical mysteries.

Each book has a slightly different setting and since they’re all in “between wars” England, the settings are both exciting and classic. From country manors to theaters to the wilds of Scotland, this series offers them all.

I’m not really sure why Julianna Deering (also writing as DeAnna Julie Dodson) only wrote the six mysteries, but I for one found them fabulous.  The first is even available on Audible (and FREE to Kindle Unlimited subscribers). I’d love for folks to flood Bethany House with pleas for the rest of the series to be narrated!

Additionally, we’re talking some seriously stunning covers.  Look at these! 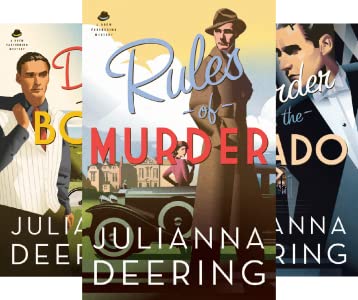 The series is as follows:

All in all, Julianna Deering has written one of my favorite series, and I really hope she’ll write more.

Additionally, I mentioned the Ever After Mysteries Cover releases…

You can find out more about mine here (although the giveaway is over for that one) and today’s release HERE.

It’s easy to win. Just keep watch on Amazon for the cover for Rebeka’s book, The Lost Dutchman’s Secret, to change from the plain “place-holder” cover to the vibrant one. When it does, share somewhere online, take a screenshot or grab a link, and email to [email protected] !

Previous Post: « The Exciting Fairy Tale I Never Wanted To Tell
Next Post: The 3 Best Things about This Domestic Abuse Suspense Novel »