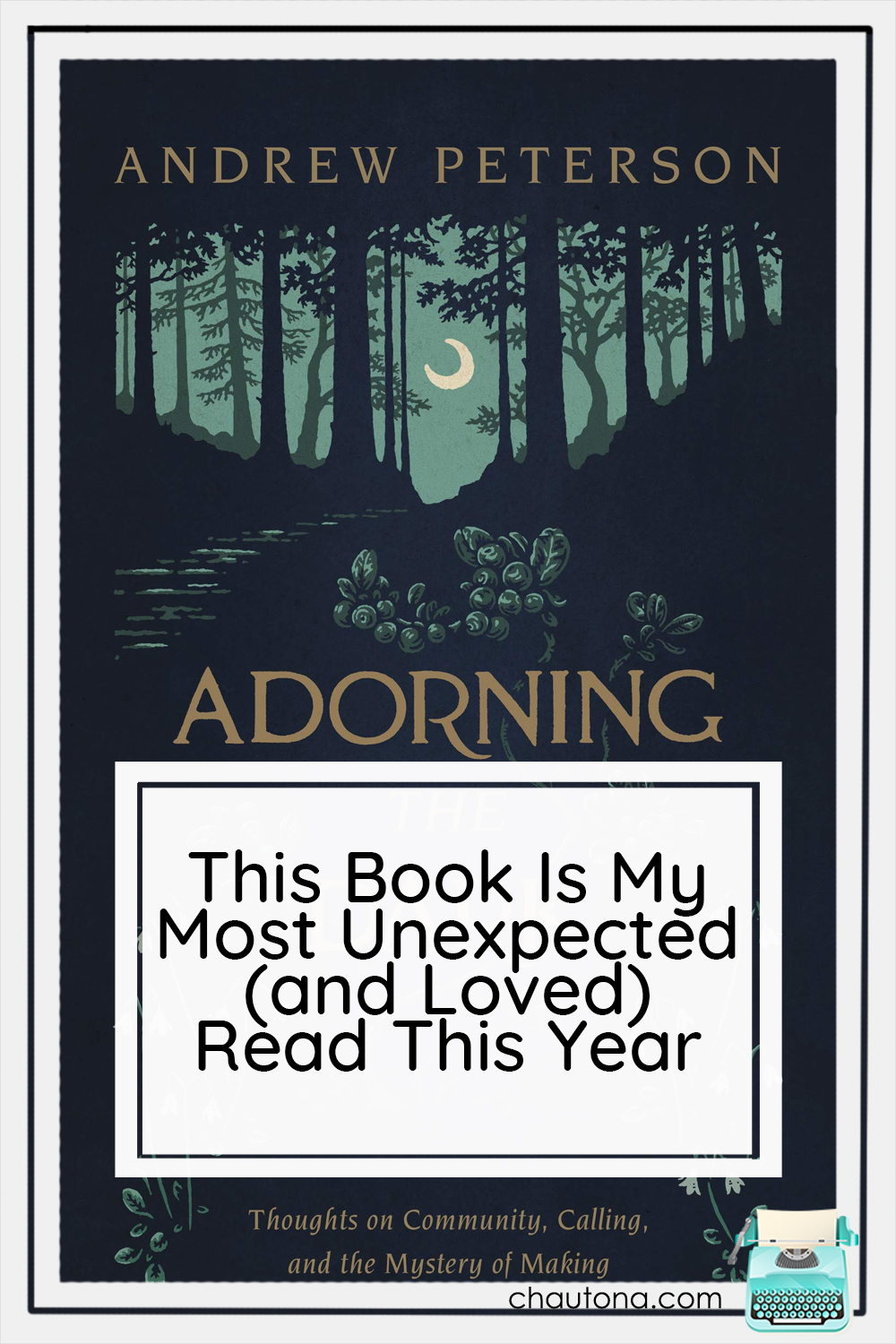 Just a note about this review of Adorning the Darkness by author, songwriter, and musician Andrew Peterson. While this book focuses on the areas of the arts, it can feel like it only applies to people who are “artsy” or are “creatives.”  That word “only” is important.  That’s how it can feel.  It’s not. I really think it’s a book that every Christian would benefit from, regardless of their personal perception of their own creativity. Let’s talk about this one… so much to unpack.

This Book Is My Most Unexpected (and Loved) Read This Year

For the last few days, I’ve been devouring chapters of this book at a gluttonous rate. In fact, my recommendation to friends that they only read one a day lasted me through 3/4 of the book and then I consumed the rest tonight.

And I’ve been shoving this title at everyone I know it will resonate with and saying, “Read this. You’ve GOT to read this!” Guilt hammered me for a bit over that one because it reminded me of how as new believers we often do that with the Gospel. We tell everyone who will even pretend to listen about this amazing story–and it’s true!

Then, bit by bit, we scale back and are careful of it–as if we share too much we’ll lose some. Silly us.

But I won’t be surprised if this book doesn’t do that to me, too. That guilt shouts into my ears, “You’ve lost your first Love. You’re replacing Him with a man’s ideas–His Word with some guy’s words.”

And it’s a lie from the pit. IT’s exactly what I think our Adversary WANTS me to think.

Because see… the truth is, this book has pointed me back to God at every turn. It has laid bare my need for communion with Jesus on an even more intimate level, and it has whispered a promise straight from God Himself (through His Word… nothing extraBiblical going on here!). It says, “Do all–your writing, your wifing, your creating, your cleaning, your LIVING–to the glory of the One, True Creator.”

And I’m humbled. Broken. I stare at my pathetic offerings through the eyes of the adult looking back at the clumsily pasted together Valentine brought home from school. And something within whispers back the truth–a truth I tend to forget until people like Andrew Peterson remind me. He sees those pathetic offerings through the loving eyes of that child’s daddy–an Abba who loves and cares both about the child and her imperfect gifts.

My soul sings new songs after reading this book–songs of praise not to this author (although he has earned my respect and a certain amount of praise, too) but to The Author. And I’m at peace.

Bonus from reading Adorning the Dark.

I found a great new song (to me).  Look, it’s no secret that I don’t like most music labeled as “Christian.” When I learned that Andrew Peterson (the author of one of my FAVORITE youth fantasy series –one that reminds me in a weird way of this other book I reviewed a while back and they’re nothing alike!) was also a musician, I’ll admit it. I dismissed it as “more of that junk.”  I hope he’ll forgive me. Guys… I’ve listened to this song a dozen times in just a few hours.

Look, I learned so much from this book. So much.  Seriously. This is going to be an annual reread–either this book itself OR one of the books that are on the “recommended reading list” at the end. I bought several books as I was reading, assuming I’d “get to them sometime,” but one of those books is the first on that rather extensive list, so I decided I’d read through that whole thing. I think it’s important. So, I’m going to have my own “Adorning the Dark” bookshelf for as long as the book and the recommended books in it point me to The Book. 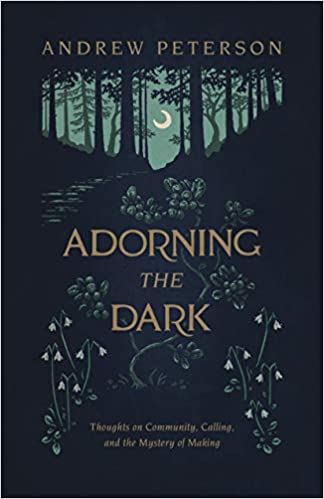 Adorning the Dark: Thoughts on Community, Calling, and the Mystery of Making by Andrew Peterson

From the bestselling author of The Wingfeather Saga and award-winning musician and storyteller, Andrew Peterson.
Christianity Today, The Gospel Coalition, WORLD Magazine each named Adorning the Dark as one of their books of the year.

Making something beautiful in a broken world can be harrowing work, and it can’t be done alone.

Over the last twenty years, Andrew Peterson has performed thousands of concerts, published four novels, released ten albums, taught college and seminary classes on writing, founded a nonprofit ministry for Christians in the arts, and executive-produced a film—all in a belief that God calls us to proclaim the gospel and the coming kingdom using whatever gifts are at our disposal. He’s stumbled along the way, made mistake after mistake, and yet has continually encountered the grace of God through an encouraging family, a Christ-centered community of artists in the church, and the power of truth, beauty, and goodness in Scripture and the arts.

While there are many books about writing, none deal first-hand with the intersection of songwriting, storytelling, and vocation, along with nuts-and-bolts exploration of the great mystery of creativity. In Adorning the Dark, Andrew describes six principles for the writing life:
serving the work

Through stories from his own journey, Andrew shows how these principles are not merely helpful for writers and artists, but for anyone interested in imitating the way the Creator interacts with his creation.

This book is both a memoir of Andrew’s journey and a handbook for artists, written in the hope that his story will provide encouragement to others stumbling along in pursuit of a calling to adorn the dark with the light of Christ.

Previous Post: « Are You Ready for an Exciting New Viking Series from 2 Great Authors?
Next Post: You’ll Find the Power of Forgiveness in the Pages of This Book »