Okay, I’m taking liberties with the use of multicultural, but multi means more than one, and the word just fits best with what happened as I wrote Deepest Roots of the Heart.The book wasn’t supposed to exist.  You see, I had an idea for a single, stand-alone novel.  A book where one of my father’s beliefs was turned on its head again. 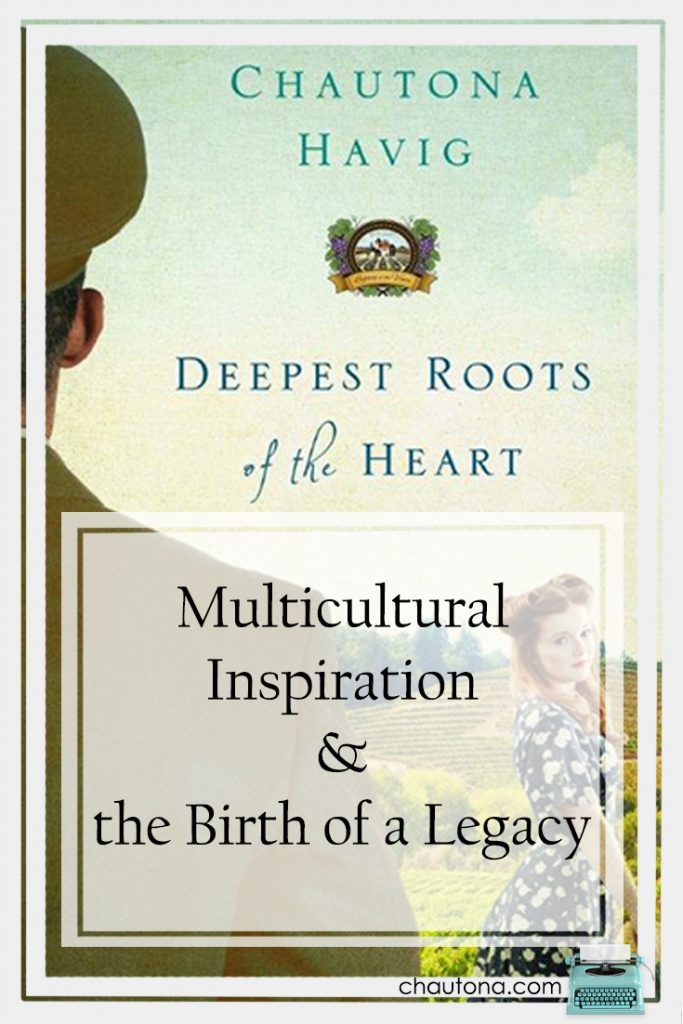 Links in this post may be affiliate links and provide me with a small commission at no extra expense to you.

You see, Dad always had this opinion.  When you go to someone’s country, you learn their language and demonstrate respect for their customs and vice versa.  Well, having grown up in California and having had the great privilege of studying California State History (it’s fascinating!), I couldn’t help but think about how Americans just took over an entire culture and beginning before annexation. I imagined a man, Ruiz Carrillo, who refuses to learn the language of the Americanos because, like my father, he believes that if they come to his country, they should learn to speak his language.

And then a young woman appeared who didn’t know the language and had no one to help her.

That one idea morphed into a new one–a very ambitious one.  I wanted to show this family beginning in 1841 with the arrival of a father and daughter from Texas and through the beginning of WWII.  I imagined the final scene.  I knew exactly how I wanted it to play out.  But it had one problem.

It wasn’t a happy ending.

Yes, there would be hope–confidence, even–that all would be well, but the end while satisfying, I hoped, wouldn’t be “happy”.  I am no Nicolas Sparks. I don’t want to leave my readers grieving.  But it would be bittersweet.  I needed that ending, but I also knew my readers preferred a “happier” ending.  The solution?  I wrote a combination prequel/sequel to the series.  (Only I would write 93K words to avoid not having a happy ending to a series.  Just sayin’.)

That book would show how the family came to Napa, how the family dynasty began, and what happened after that soldier took off for war, leaving his beloved vineyards behind.

It would show the differences in theology between Protestant and Catholic influences as they melded into one family.  That multiculturalism thing began in the first official book of the series  Crushed Dreams with the blending of languages, but by the end of the series, you see a young man loving his heritage, holding fast to beliefs that sometimes conflict with official stances of his church, and all amid an ever-increasing shift from his Californio heritage to his American one.

Not an easy thing for a young man.

When I say this book/series is multicultural, I’m speaking not just of Mexican/Californio (they are two different cultures) vs. American.  I’m speaking of genteel Virginia, Texians (rugged settlers who fought at the Alamo and the Battle of San Jacinto), Okies from the dust bowl, Californians of Californio heritage who are presumed “Mexican” simply because of their Spanish and and sometimes slightly darker skin tone.

Odd. When I first used that word “multicultural”, I felt like it was a bit of a stretch, but anyone who knows the old South–Virginia.  And then Depression era Oklahoma–those two alone are vastly different! Fascinating!

The series is also, obviously, historical.

Of course, it is!  But as I was thinking about it, I realized that even within a single culture, a century of changes can turn one locale into a multicultural experience.  1900 New York City is a very different place than 2000 or 2016 New York City.  And all the cultural changes over the years, while perhaps not being what the term implies, definitely showcases multicultural changes in a society.  It happened long before the word was ever heard in general conversation.

Wow.  I suddenly want to write a family saga taking place in one of those cool villages in NYC.  No, Chautona. NO!

I rarely have sales on Deepest Roots of the Heart because it is the one book I have no control over.  I hate to urge anyone to spend money.  It just isn’t my thing.  But if you think you want a glimpse into California history, this is the time to do it. I doubt it’ll too inexpensive, but for those who purchase it, the audio is usually just 1.99, too.  It’s read by Thom Rivera and he did a fabulous job!  See, like this:

A Sample from the Audio

Isn’t he wonderful?  I just love the ease with which he switches from no accent, to English with a Spanish accent, to flawless Spanish and back again as if he’d always been an Okie!