Near the end of September, the air grows a little cooler and crisps like the ripened apples on trees. It announces one thing. October is just around the corner. As Anne Shirley said, “I’m glad to live in a world where there are Octobers.”

But for the bookworm, October brings more than cooler weather, vibrant trees with their falling leaves, and pumpkin spice in everything from cookies to coffee. October begins the Christmas fiction reading season.

The same people who protest the encroachment of Christmas on Halloween or  Thanksgiving embrace the burst of new holiday stories on the world.  Maybe it’s because few Christmas books are so uniquely and definitively Christmassy. Or, perhaps it’s just that so many of them begin during autumn.

Whatever the reason, while I’ll turn up my nose at ornaments and evergreen boughs at my favorite stores for the next six or eight weeks, I’m anxious to read this year’s Christmas novels as much as the next bibliophile. But where to start?

Well, I requested review copies of several books, and A Tale of Two Hearts was one of the first.  I chose well.  Just sayin’. 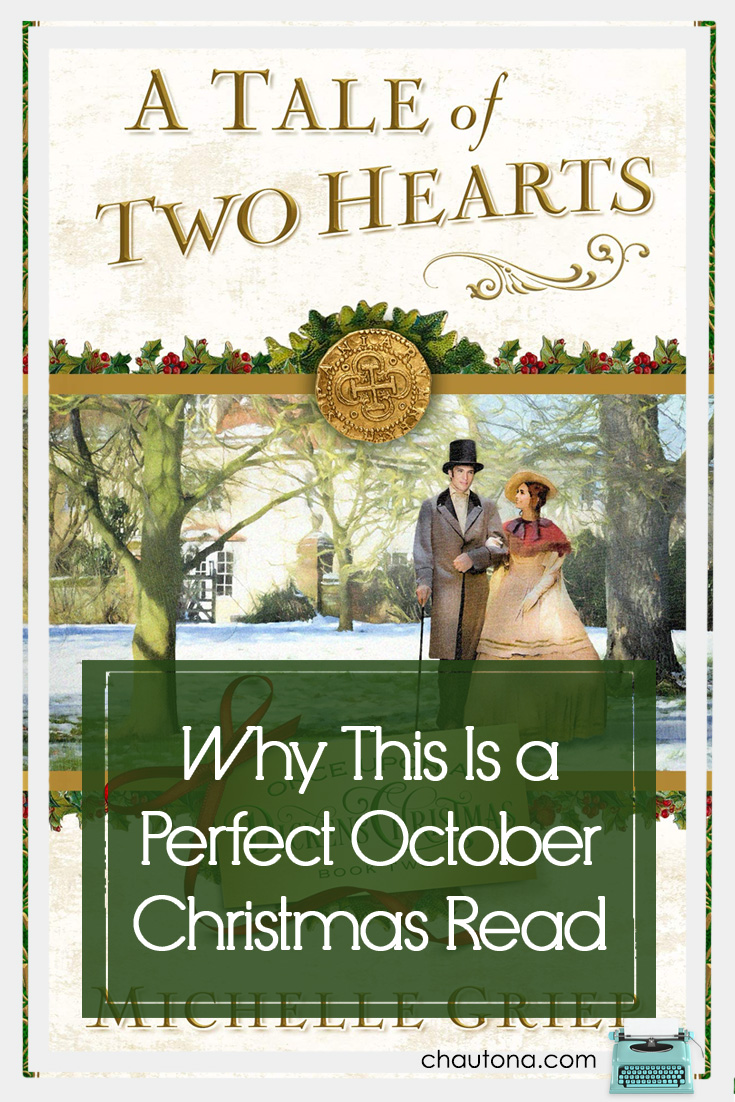 Note: links may be affiliate links that provide me with a small commission at no extra expense to you.  Additionally, I requested a review copy of the book. Opinions are mine and given freely.

Why This Is a Perfect October Christmas Read

Michelle Griep has done it again!  Last year’s 12 Days at Bleakly Manor (link goes to my review) was a beautiful story full of rich Dickensian characters,  and I did fear that this one wouldn’t rise up to the bar she’d set. I shouldn’t have worried.

With characters who feel very  much like they could have stepped right out of the pages of any Dickens novel, A Tale of Two Hearts holds all the appeal of that wonderful storyteller’s characters and yet they are clearly Ms. Griep’s.

Will is earnest, determined, and oh, so wonderfully flawed. Every choice he makes digs him deeper into his hole of deception.

Mina, like many of Dickens’ young women, is strong and honorable, even—if not especially—when she’s been led in something against her will.

As with the last book, I know we’re supposed to see specific characters in Will, Mina, Mr. Barlow, and Miss Whymsey, I suspect I saw different ones.  I found John from Our Mutual Friend in Will—that duplicity for the good of another really shone there.  In Mina, I saw a mesh of Little Dorrit and her sister, Fanny.  She starts with Amy Dorrit’s heart and Fanny’s longings and learns to embrace the life she has—just as Amy always did and Fanny never did.  Again, I know it’s not what I was supposed to glean from the book, but it’s what I did.

One of the most important reasons that it is a perfect October Christmas read is that the spiritual truths woven into the story are exactly the ones we need to read and remember as the year comes to a close. Lessons on others before self, honesty in all your dealings, second chances… and third.  Because isn’t that what the Lord did for us?  Aren’t we called to become like Him?

I recommend this book to anyone who enjoys historical fiction.

Ms. Griep has done her research well. Not a single thing felt anachronistic. I also recommend it to those who enjoy Dickens’ works.  Rather than being retellings or involving him so much that it would be a disappointment, these are inspired by his stories and stand alone.  I believe Dickens himself would read and love them.

Even if you don’t enjoy Christmas, I think you’d enjoy this story about two people, the lessons they need to learn, and how those lessons knit together two hearts in this delightful but not overly-sappy Christmas tale.

Previous Post: « What Happens When Your Little Sister’s Best Friend Becomes Yours?
Next Post: Which Author Writes the Best Novellas Ever? »