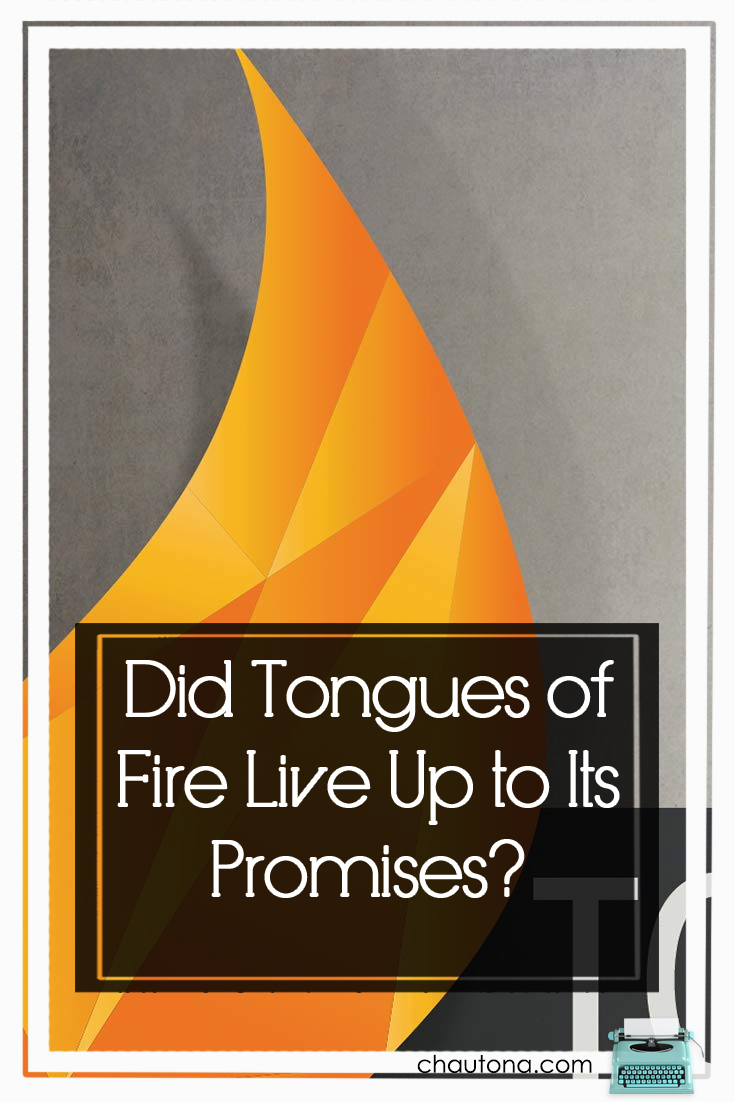 “You keep doing that. You keep choosing to read books you know you’ll disagree with.”

Look, it’s a valid point. I won’t pretend it’s not. But unlike the not-so-subtle implication of the accusation, I really don’t go looking for books to spend hours reading so I can then say how much I didn’t like them. As someone once said about something, “Ain’t nobody got time for that.”

Sometimes, I get asked to review something and I say, “No… sorry.” That’s usually when I both know I won’t like it and don’t expect to find anything in it that I do like.

However, when a book comes along that isn’t really my cup of tea, but I know I’ll probably learn something, then if my reviewing it will help, I’ll agree.

That happened when the opportunity to read, Tongues of Fire came along. A fifty-day devotional on Pentecost, I knew the content would clash with my own understanding of Scripture. So, why did I agree?

Because I have friends and readers who believe things about Pentecost, the Holy Spirit, “tongues,” and other “manifestations of the Spirit” and I want to understand why they believe what they do.

I figured if anything could do that, Tongues of Fire might be one. It promised to help us celebrate the “wild tongues of fire that signified the coming of the Holy Spirit on the day of Pentecost.”

Did Tongues of Fire Live Up to Its Promises?

Actually, yes it did. It celebrated the amazing beauty and power that came at Pentecost in a rich and wonderful way.

With devotional messages from preachers I recognized from times past (Finney, Wesley, Murray, and others), as well as those from people I don’t recognize from today (except for James Goll whose book I reviewed last week) the book covers topics like speaking in tongues, healing, faith, and more.

Every lesson’s emphasis is on what the Holy Spirit is doing in your life today. For that, I applaud the effort.

Unfortunately, the daily lessons were disjointed and sometimes contradictory. I found it difficult to figure out what some of the modern teachers were trying to accomplish in their lessons.

Additionally, I had serious issues with part of the content.

Like I said, I came prepared to learn and understand. While I didn’t expect to have my mind changed by the content of a devotional, I was willing to be shown to be wrong.

Still, that’s not the point of a book like this. Because of that, I just didn’t think it would happen, and it didn’t. I knew I’d disagree with things, and I was prepared to say what they were and move past.

A few things I could not move past, and I think they’re important to note. In no particular order, except that it may be the order they appear in the book. I’m not sure. These were some of the biggest things I took issue with. Two, in my opinion, are unacceptable to find in a Christian book.

This one I reread half a dozen times to be sure that’s what he said. If it is not, then he needs to rewrite his sentence, because I can’t make it say anything else.

I understood what the teacher was trying to say, but I simply don’t find Scriptural example or command to do this. The Holy Spirit is here with us as believers, because that is where He lives and what He does, not because we followed the right formula to have Him as a part of our lives.

Frankly, I was happy to see this one. I don’t object to it at all, but I do note it because of that contradiction with #2.

hen Christ’s saving work on the cross wasn’t enough. This was one thing I couldn’t overlook as “educational.” Had the book not been a devotional with many authors in it, I would have stopped reading there.

I am glad I did keep going. There were solid nuggets later.

So much damage has been done to the church with claims like that. There, I also wanted to close the book permanently. I did, however, continue to the 80% mark.

I can’t recommend the book.

Even the parts I did like and learned from and found helpful in understanding people I love and care about were frustrating to read and not well organized. Had this book been written about every single thing I fully agree with, I still would not give it a high review for the way it’s laid out and such.

Still, even had I loved every single bit except for those five points, two of those were serious enough that I can’t give it a high rating. I can’t recommend it due to it linking salvation to an expression of something rather than the work of Jesus in us and to linking a lack of our fallen bodies being less than perfect to a lack of faith. Those two things are anti-Biblical as far as I understand Scripture.

Previous Post: « Strike the Mark: Was It a Total Win or Epic Fail
Next Post: What’s the Best Thing about Every Great New Book? »