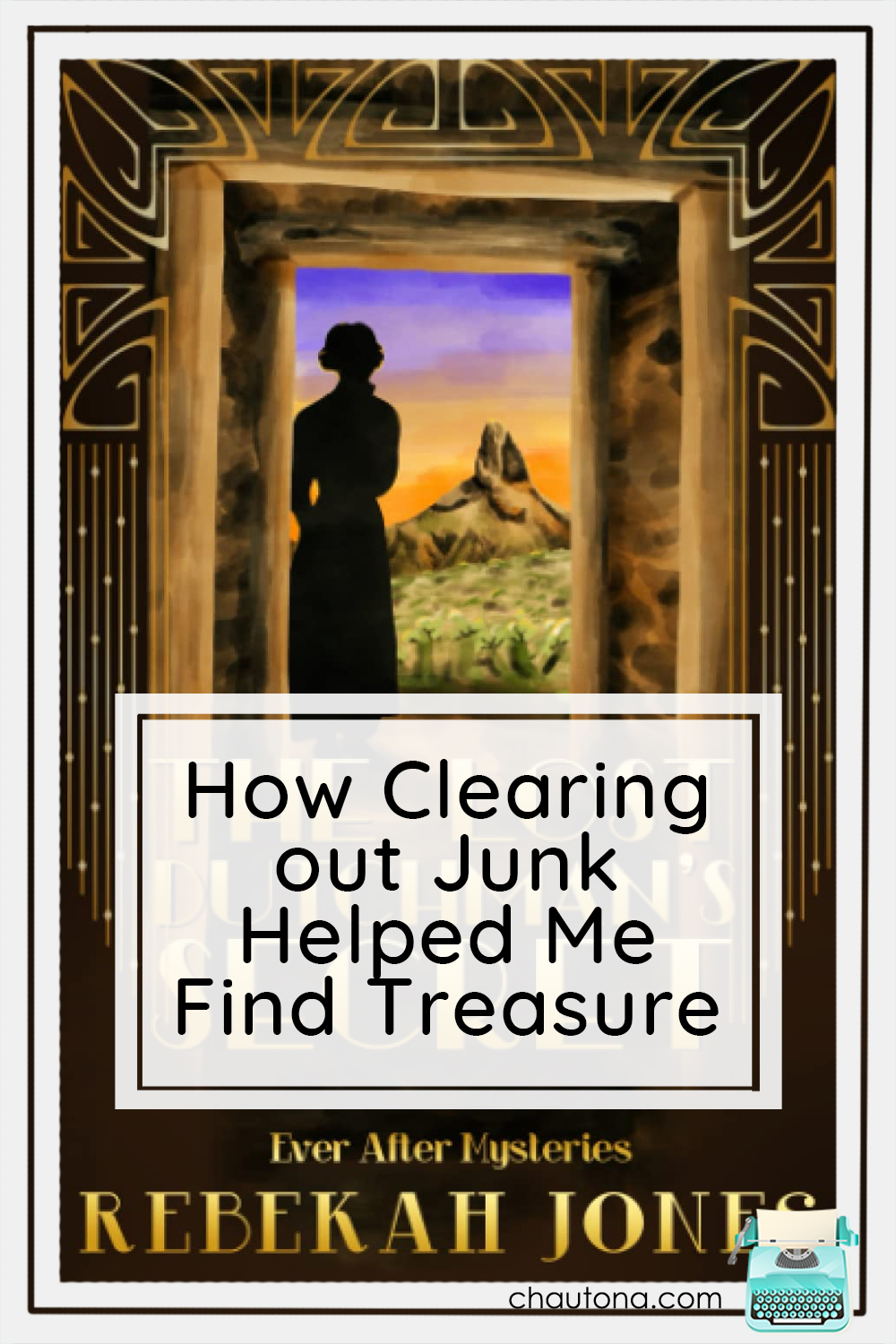 When you spend a weekend with a professional organizer who is trying to help authors declutter their spaces, their schedules, and their minds, it gets under your skin, okay? I am already prone to bouts of decluttering frenzies as it is.  I mean, I wrote a whole book on one woman’s quest to eradicate the excess from her life. It’s a thing for me.

So when I got home from the retreat, I didn’t even want to unpack my suitcase.  I mean, come on! I came home with stuff that I didn’t leave with!  A candle, a couple of books… or five or ten… um… yeah. Stuffness, okay?

But I couldn’t resist for long. See, I’d picked up Angie Hyche’s Unholy Mess and started reading, and the bug hit.  Laundry first.  Once that was done, I had to put the stuff away, and that’s when everything went south–right into trash bags. I filled one with clothes I hadn’t worn all summer.  Look, I don’t have many clothes to begin with.  I have a closet rod just barely over three-feet long.  Single rod, not double. Know what that means?  Yeah. limited clothing options.  I also do not have a dresser, bureau, or chest of drawers (covering my clothing storage bases). Three tiny squares in my closet hold underwear, t-shirts, and leggings. That’s it, folks.

And I chucked a bag.  A full bag.  I also found a couple of things I wanted to make changes to. A too-big jacket that I love too much to chuck.  Needs to be cut apart and redesigned.

You’d think with all that, I’d be DONE.  Not hardly.

How Clearing out Junk Helped Me Find Treasure 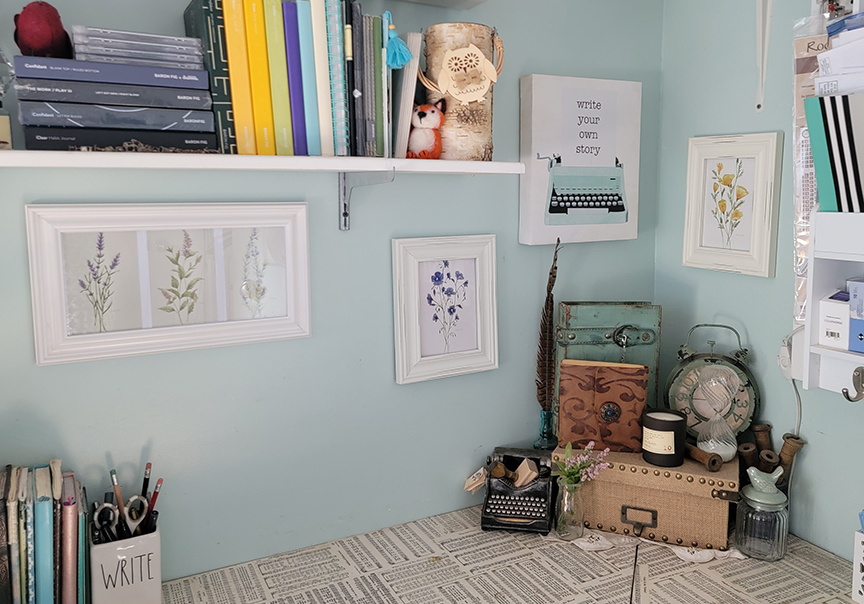 Wait. This isn’t If You Give a Mouse a Cookie.  This is more like, “if you find a treasure map, watch out!”

Look, I don’t remember where I got the thing.  It’s not mine.  Maybe it’s leftover from my father’s forays into the Superstition mountains when I was a kid.  No joke. Dad used to haul me up to the mountains on Saturdays to look for the Lost Dutchman Mine.   And that’s what the map is to. Supposedly.  I don’t buy it, frankly.

So there I was, trying to figure out if I should just chuck it or if maybe I should send it as a souvenir to Rebekah Jones. After all, she just wrote a mystery surrounding the Lost Dutchman Mine. What a great release present, right?

That’s when the call came in, and I punched the speakerphone in time to hear Rebekah say, “Liz says she sent my map to you to keep it from the clutches of treasure hunters.”

Had it come in while I was gone? Maybe that’s why I didn’t remember it.  Everything began to make sense. Before I could tell her I had it, I heard voices outside my room.

“I heard her say map.”  It was probably supposed to be a whisper, but um… not hardly. Maybe in a sawmill, as Audie Murphy would say.

I punched the speakerphone to regular, sneaked over to lock my door, and squeezed myself out my bedroom window. Let’s just say it wasn’t a pretty sight, and no one ever wants to see that again. From there, I raced off to the post office, stuck it in an overnight envelope, and mailed it to Marji Laine.  After all, she’s in Texas where everyone and their florist has a gun–except Quakers, apparently (name that movie).

So, I had the map (although, I didn’t know it), and now that I’ve decluttered my house of it, of the fellows trying to snag it, and of a bag of clothes, I think I’ll go work on the rest of my desk area.  Adios, compadres! 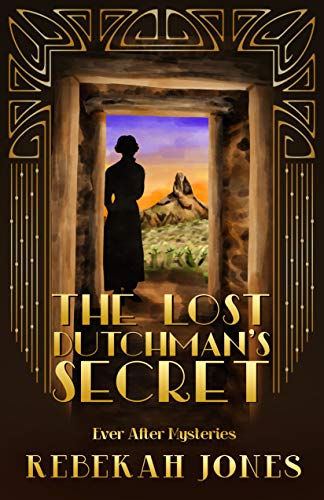 Deeply in debt to a wealthy local, Charles Sinclair, Dorothy Hodges’ father finally promises she’ll pay and in gold, no less. If only Dorothy could take to take the promises he spins out of thin air and turn them into that gold, all would be well.

With the help of a strange, rumpled man, Dorothy does manage to bring payment to one of Sinclair’s sons only to discover it won’t pay off the debt. Will the next payment be enough?  The next?

When Charles Sinclair ends up dead, Dorothy is the obvious prime suspect, but Sinclair’s son isn’t so certain. Together they work to clear her name and find the real murderer of the Superstitions, but will they find the answers buried in those hills?

Find out in this next book in the Ever After Mysteries, combining beloved fairy tales and mysteries. The Lost Dutchman’s Secret offers a retelling of “Rumplestilskin” that requires more digging than a miner searching for The Lost Dutchman Mine.

Oh, and don’t forget to get in on the other authors’ giveaways and find out where that map has been!

And get your entries in here!

Previous Post: « Why This Author’s Authentic Historical Fiction Is So Well Loved
Next Post: The Last Thing I Need Is More Amazing Books to Read—Just Kidding! »