The sound of an airplane pierces through slumber.  Eyes open. Head snaps up.  Whiplash first from the aforementioned snapping, then from getting tossed aside by said airplane.  Note:  It really isn’t an airplane.  It’s just a fan with a motor that sounds like a single-engine plane and a blade the size of a propeller.

Shower. Hair dry. Clean, real clothes. Shocker of shockers…makeup!  One minute I looked like I had lived in bed for a week. The next, I looked half alive.  Packed up my work bags.

Bag in each hand, off I went.  They had my booth waiting for me.  They love me.  Shhh!  Leave me to my delusions!  This is my story! The fact that they probably groan at the sight of me is detrimental and deleterious to my delusion!  Back to the story.

I can’t tell you how good it felt to slide onto that lovely vinyl seat *cough* and pull out my laptop.  My desk.  It’s so pretty.  Okay, it’s not.  It’s a typical ugly diner table.  But when you miss something, nostalgia beautifies it.

About that time it was….9:35? I sent a message to a fellow writer who sometimes meets me on the weekend and let her know I’d arrived and gotten “the” booth.  It’s number 14.  Note: if you come to Ridgecrest and sit in my booth at night when I’m going to be there, I’ll be waiting.  And watching.  And trying not to think malevolent things about what should happen to your food.  Just kidding.  Sorta.

My favorite server is  Angela.  Look.  Our Denny’s has great employees. Alfonso, Andrew, Uli, Jonathan, Selena, Sierra, a new girl Alexis who looks like one of my “Spectacles” characters, Avery… they have great servers!  But Angela–she’s my favorite.  Partly because she sounds a lot like my Aunt Barbara when she talks sometimes.  It’s a bit freaky to pull out my headphones on a restroom trip and hear her talking. Aunt Barbara sounds and looks a lot like Jane Russell.  Here’s a clip to give you a hint.

That woman looks and sounds JUST like my Aunt Barbara.  And, it’s not even just my opinion.  She’s heard it her whole life.  😀

Angela works ten to six–almost the hours I’m there.  So she arrived at ten. She took one look at me and said, “I have a gift for you!  You’re alive!”  LOL.

Backstory. Our Denny’s is right across the street from one of the most popular bars in town. Bars close at 2?  2:30?  Something like that.  Because just around 2:30, especially on “Flex Fridays” the place starts hopping.  And that’s when I start wincing.

The place gets L.O.U.D.  We’re talking loud.  And full of people with much more colorful language than I care to hear. Now look.This is what makes being open all night worth it for the restaurant in our town.  Because, let’s face it.  Most people in Ridgecrest are sleeping between midnight and four or five a.m.  We’re a pretty boring place.  But people apparently get hungry when drinking a lot, so they come over and fill up on different calories.  Pancakes are a favorite. I see a lot of pancake orders.

So, instead of packing up and going home like I used to, I bought me earbuds.  Tiny ones that actually fit my very small ear canals.  With that and 101 Strings or the Piano Guys, I’m usually good to go.  But sometimes…Sigh.

So anyway… Angela dashes off to her car and returns with a gift.  Check it out. 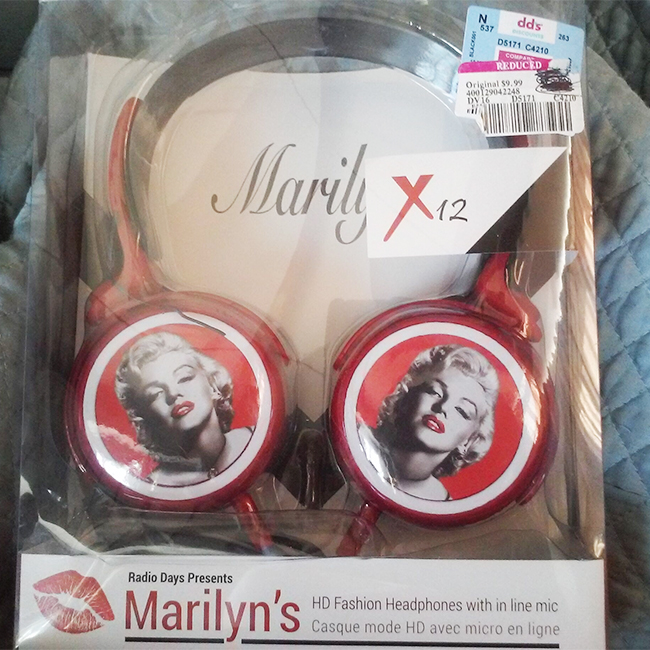 Isn’t that a hoot!  And they’re “noise isolating.”  They fit my head!  Most are too big and flop around.  These don’t.

They got the acid test last night. About a dozen of the loudest people I’ve ever heard came in.  Look.  Usually my earbuds drown enough out that even though I can tell stuff is going on, I can’t hear actual words. This time I could.  I tried raising the volume on the music a bit, but my ears are pretty sensitive. I can’t go above an 8 on my volume control without it hurting. So, I tried just the Marilyns.  That didn’t work.  But man… put in those earbuds, turn it up to 8, slap on those Marilyns, and BAH-BAM!  Seriously!  Only the slightest drone from around me.  WOOT!

I got eleven chapters edited, rewritten, and tightened last night.  VERY productive after a week of almost no work at all. I was feeling on top of the world!  I have to credit these amazing headphones for it.

I love them.  Love that she thought of me.  I just have one question.

Do you think she’d be offended if I put my logo typewriter over Miss Marilyn?

Previous Post: « Taking Thoughts Captive = Spiritual Warfare?
Next Post: Why This New Series Is Destined to Be a Favorite »