The cursor winked at me. Mocked me. I’ll admit it, my head connected with the trackpad on my laptop. The cursor skittered across the page leaving spaces and a choppy mess of Bs and Vs in its wake.

She stepped into my room and stood there. “What are you doing?”

Silence. Then it came. “Bad book?”

I guess that threw her. “So what’s the problem?”

I sat up and stared at the bizarre mess of a screen. “Reviewer’s block?”

My ever-helpful daughter just stared at me before turning to go. “Have fun with that.”

Writing in that mess wouldn’t work, so I deleted all those spaces, Bs, and Vs.

It was the most productive thing I’d done all afternoon.

There were so many things to try to process—to understand—to share. By the time I’d made a list of them, I realized that I’d be rewriting the book if I tried to explain half of it.

But one line caught my eye.

Toddlers think time out is torture, so the North Koreans employ it for American captives. 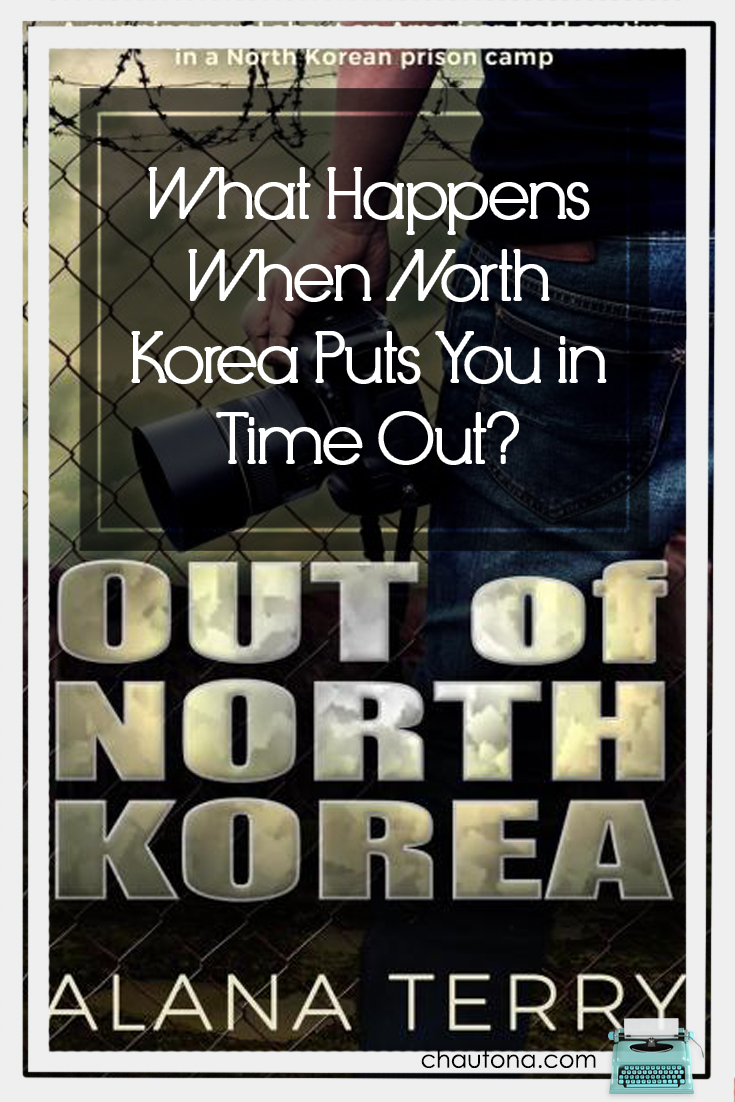 Note: links may be affiliate links that cost you nothing extra but give me a small commission. I also requested a review copy of the book and received one with no expectations of the content of that review.

What Happens When North Korea Puts You in Time Out?

There are so many things about Out of North Korea that I want to address. Ian’s character voice. While it didn’t take long to notice the first-person narrative, it didn’t annoy me.  Instead, I really enjoyed the personality that came through each word. But it unnerved me. I actually left this book and went to find another book written in first-person to see if I’d just gotten numb to my least-favorite perspective in writing.

Nope. Alana Terry is just that good with it. In fact, not only is this book in the dreaded first person, about a third to half the way through it, I realized it is written in first-person present tense.

I despise present tense. But it was a rare spot here and there that she made me notice it.  For the most part, you’d never know, because she does it that well.

Add to it supporting characters who aren’t what you expect—and then are—things just turn upside down. One thing I really appreciated was that Terry didn’t mince words about where the American church’s thinking gets skewed.

Still, she doesn’t just bash on Americans or attack people for something they can’t help (ethnic origins, for example). She shows what can and should be done about it. Loved that—and not just because she agrees with what I’ve always said.  Ahem.

Who should read this book?  Well, anyone who appreciates good fiction that is well written and makes you think.  If you enjoy characters with snarky, sarcastic humor who can laugh at themselves as much as anything, you won’t go wrong with this book.  And if reading a book without a romantic element is a blessed relief, then look no further. I seriously loved that this wasn’t about guy meets girl at all.  Such a nice change. 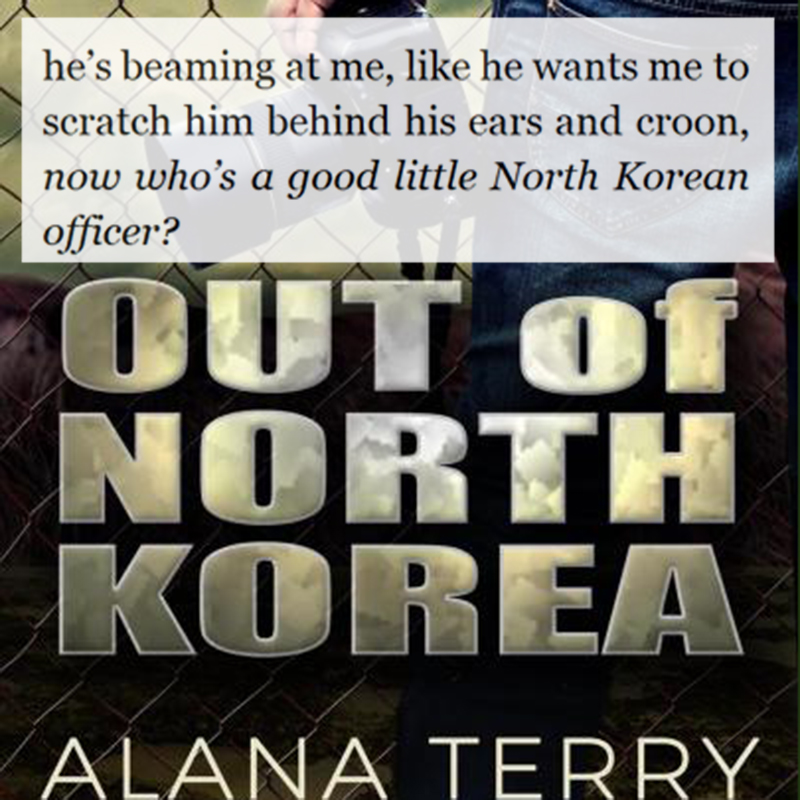 So, what does happen when North Korea puts you in time out?  Well, your life changes in ways you couldn’t have predicted—kind of like when you read about it. I definitely won’t be the same after reading Out of North Korea. 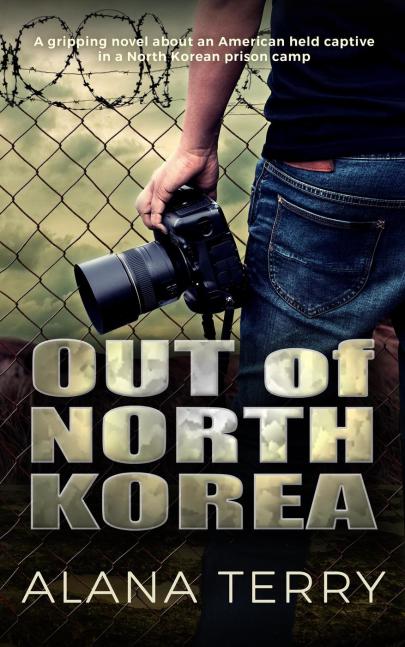 Book Title: Out of North Korea

A single photograph could cost his life …

Ian McAllister has searched the world over, hunting for that all-elusive perfect photograph.

He finds it on a tourist trip to North Korea when he stumbles upon a young street kid foraging for roots.

Unaware that this single act will brand him a spy and cost his freedom, Ian takes the shot.

Now he must pay the penalty.

A true-to-life novel about an American imprisoned behind North Korea’s closed borders.

Previous Post: « How Do You Talk Your Best Friend Out of an Insane Idea?
Next Post: How to Destroy Your Life in 3 Super-Easy Steps »

Nothing makes my heart sing like a good romantic suspense.  Okay, it’s really all about the suspense for me, but I’ll take that romantic part, too if it gets me the suspensefulness. EEEP! Karen Randau is a new-to-me author with a book that opens like no other. Joggers. Fog. And poof! One of the joggers is gone. What happened and what else will we learn in this series?  Listen in and find out!

Action, Danger, Personal History, and Romance—What’s Not to Love?

Okay, nothing makes my heart sing like good suspense… UNLESS it also comes with locales I’m familiar with and an unexpected twist or twenty. Karen Randau’s Into the Fog, the first book in the Peach Blossom Orchard series. Don’t let the series title fool you, these books promise some spine-tingling adventures!

Karen and I discussed her books (she even has an audiobook for audiobook lovers), what she loves about writing, and even some of what she loves to read. Add to that her experiences with PTSD and let’s just say that I’ve been aching to get my hands on the time to read this book and it’s FINALLY here. Into the Fog has a killer opening and I don’t want to miss a single word. So, whenever I get a moment on my drive across the US next week, I plan to sneak a chapter or three myself!

Into the Fog by Karen Randau

Love and danger spar in this thrilling romantic suspense

Hands push Marie Jessica (“MJ”) Goodrich from a rural roadway into an icy creek. The clock is ticking for her pleading friend on the other side of the ravine.

Running from flashbacks of a life-altering attack in Afghanistan, MJ takes refuge with her mother, managing Peach Blossom Orchard. But peace is elusive in a rural Oklahoma town full of secrets.

After losing his wife and children in a fatal car crash, Josh Rivers doubts he deserves a second chance at love. He can’t believe his bad luck when MJ, the woman who plagues the nightmares of his military service in Afghanistan, shows up in his hometown. She claims a driver ran down and abducted her friend Kelsey. Frustrated with the county sheriff’s investigation, MJ and Josh partner to follow clues that lead to a kidnapper who demands a bizarre ransom.

With danger increasing for everyone MJ loves, will the clock run out before they solve the mystery? Find out how MJ and Josh—swirling in a whirlwind of mystery and suspense—lean on their mutual faith to find answers, courage, forgiveness, healing … and wholesome romance.

If you like to read Christy Barritt and Colleen Coble, you’ll love Into the Fog, a keep-you-up-at-night clean romantic suspense novel that launches the Peach Blossom Orchard series.

You can learn more about Karen Randau on her WEBSITE.

In castles far and near, long ago and yesterday, f