“Give ‘em ginger-peachy service, or their appetite’ll spurl. That’s the first requirement of a Haaarvey Girl.”

Say “ginger peachy” in my house, and someone will bust out into song. Harvey Girls was a favorite of the kids—likely because of Ray Bolger’s fabulous dancing and Virginia O’Brien’s “Holy smackers, milk and crackers but it’s mild in the wild, wild, west!”

Still, living near one of the old Harvey Houses (well, as near as anything is to us in the “barren blistered end of creation”), I eventually looked up Fred Harvey and his houses. The story of his franchise can’t help but fascinate history buffs, and what a great setting for a story.

So, when I had the chance to request a review copy of On the Rails: a Harvey Girl Story, I had to jump at it.  Of course, it made me think of the movie, and that made me wonder… 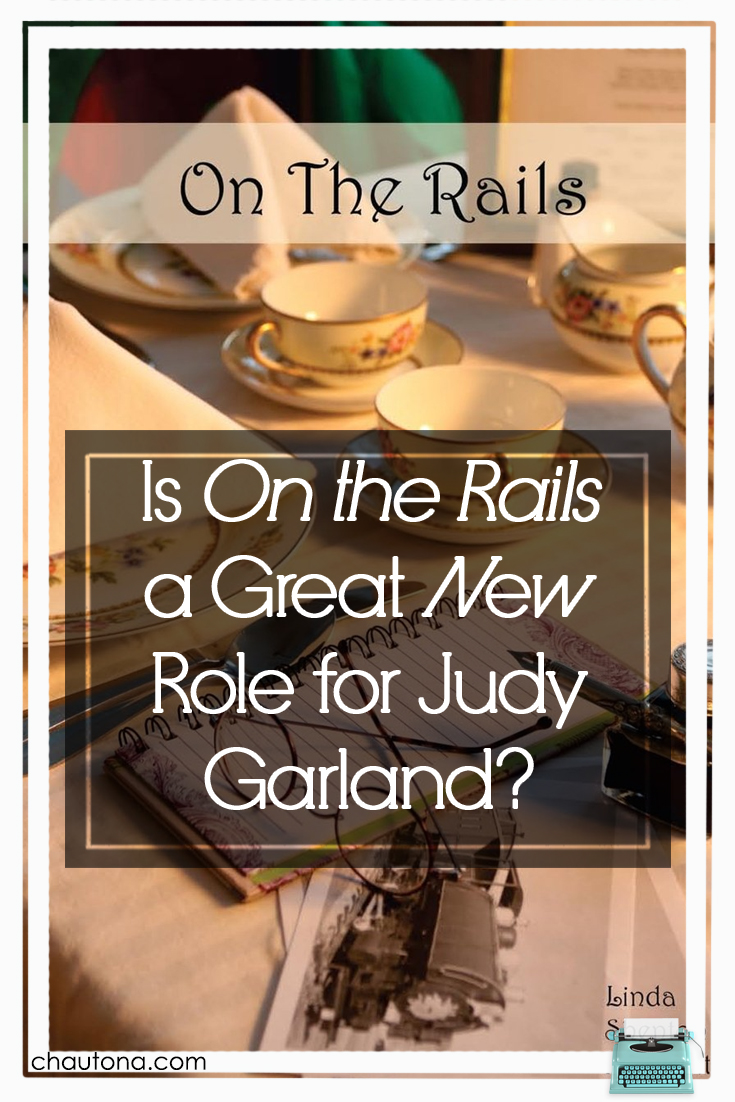 Note: links may be affiliate links that provide me with a small commission at no extra expense to you. I requested a review copy of the book and chose to review it after reading.

Is On the Rails a Great New Role for Judy Garland?

Let’s see… what does it have going for it?

There are interesting characters and sufficient conflict to make the cut.  Katherine isn’t “too perfect,” and while she’s annoying, it’s in kind of an understandable way.  I suspect most readers will find her most annoying at the beginning and less so after the last third.  I actually found the reverse. Post-salvation Katherine, while incredibly authentic with the “gotta save the world” zeal of many new Christians, made me cringe much more than prideful and embarrassed Katherine who slapped the man she felt had led her on.  (And really, who breaks up with someone with a rare dinner at a fine restaurant?  Duh!)

That said, she shouldn’t be surprised that the locals gossip when she makes a public display of herself.  Just sayin’.

The setting is awesome (although, I don’t think the author is very familiar with the desert or Williams, Arizona), and the premise of the story is good.  It may seem silly, but one of the things I liked best is that it didn’t feel like a copy of The Harvey Girls at all. Only an unexpected fire made me blink and go, “Well, that’s… familiar…”  Still, it probably happened a lot in those tinder-built towns.

I want to love this book, but I don’t.

However, I enjoyed parts of it.  Unfortunately, much of it fell short of its potential. I had trouble with certain writing elements, the convenient conversions, and the “canned” elements of doctrine presented to further the plot rather than as a natural outpouring.  It isn’t the first book that I read of Ms. Matchett’s, and like that one, there are excellent elements, but as a whole, it’s just “okay” to me.

Historical fiction lovers will enjoy the history of the Fred Harvey company woven through a story that does hold interest.  However, desert dwellers (particularly those familiar with the Williams/Grand Canyon/Flagstaff area) and those who are bothered by “too convenient” conversions should be warned that this may not be the book for them.

As for a movie, I actually think Judy Garland could have done a fine job with the story.  In fact, it might have been a nice, sweet screenplay for the time. I also suspect that with excellent acting, this story would have been even better as a movie than the book.

Previous Post: « Is The Lost Art of Relationship Worth Your Time?
Next Post: 3 Unexpected Ways Learning to Trust Will Change Your Life »