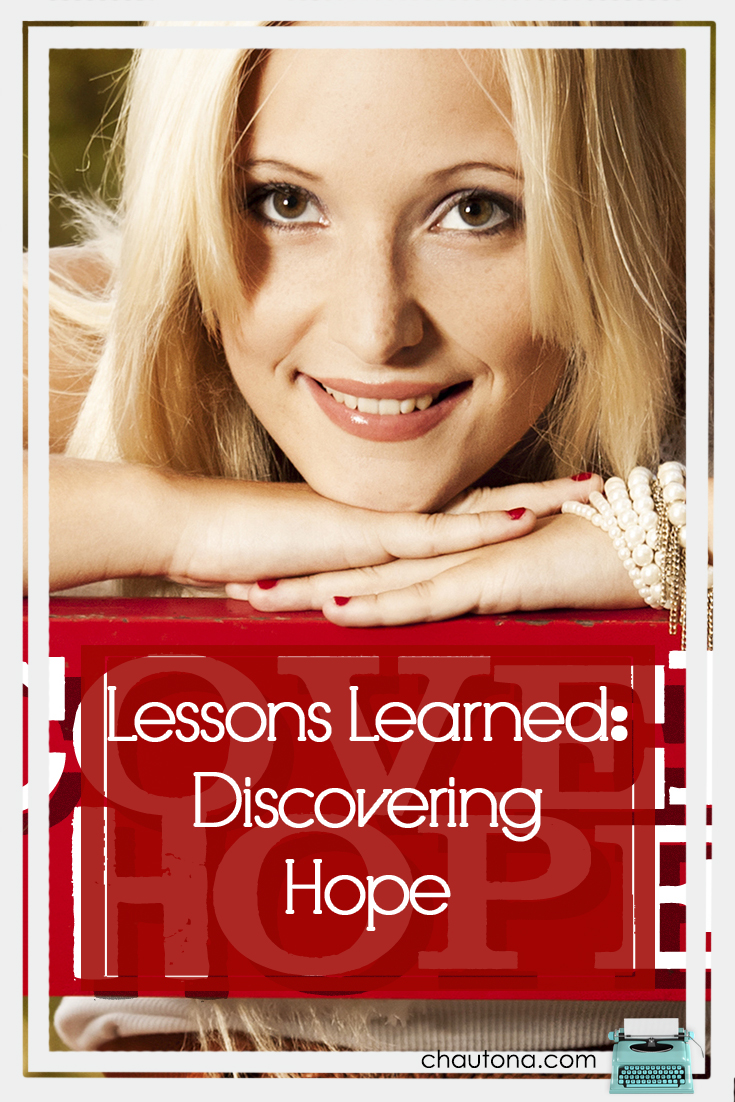 Before we get started in the lessons learned in Discovering Hope, I thought I’d give a bit of…

Hope was a NaNoWriMo challenge to myself.  I told myself I wanted to write the sappiest book I could possibly fathom.  At the time, I couldn’t have written anything that dripped with more sap if I tried.

Originally, I named it Hope 101.  I wanted to offer true Hope without being obscenely preachy.  I don’t know that I succeeded, but I do love the finished book.

Note: links may be affiliates that provide me with a small commission at no extra expense to you.

The book is full of favorite characters. Kirky is inspired by a friend of mine.  The “real” Kirky and I spent hours searching the internet for just the right dress for Hope to wear to the opera.  We never found one, but we had fun “creating” one.  Raj is “real” too.

Another dear friend shared one her friends’ quirky twists of American idioms–and his idea about American names. And Hope’s last name was inspired by a lovely woman in Georgia who talked me through many late nights and early mornings as I wrote Hope’s story.  Thanks, Lisa!

I love Hope’s strength-wrapped femininity.  I’d never thought of it until just now, but there’s a certain bit of Fanny Price from Mansfield Park in her.  She’s strong in her beliefs, but not overly vocal about them unless pressed.  She’s endured a lot of pain in her few years.

I think that’s what I learned the most from–how she embraced and balanced the truths of grief and joy that come when a Christian is finally home.

We weep for them–we weren’t done with them here yet–but we also rejoice in knowing they are complete.  It’s such a difficult combination of feelings.  We feel guilty for the anger at our loss, knowing that they truly are “better off” (do you know anyone who likes to hear that?  The words hurt rather than console most often).  Yet during those moments where we truly can rejoice for their wholeness with Jesus, we then feel the guilt of not being grieved for the loss.

I tried to show those in Hope–just a bit.  I didn’t want it to be too heavy.

Oh, Jay.  Writing about Jay and his family gave me such a deep love for Indian culture.  The amount of research I had to do in this book still amazes me.  I stalked Tamil forums, searching for the right words to use here and there.  I wanted the flavor of India without bogging down the story.

One of the hardest things to read was how often non-Indian women fell for Indian men who (often telling them upfront) would never marry them.  Their families have expectations and arranged marriages are much more common even now than I realized.

I almost changed Jay when I read that, but I couldn’t.  So I wrote the ending that so many non-Indian women would have wished to have. It isn’t impossibly unrealistic, but it isn’t as common as I assumed.

One of the amazing things about Jay and his story came when I researched his head injury.  I had no idea what to expect from it.  I first had to discover if that injury could happen!  It isn’t likely, but it is within reasonable possibility.  I then had to decide what kind of result there would be.

What amazed me was how everyone’s stories were different.  Some people had short-term memory loss similar to what you’d see in Fifty First Dates or Remember Sunday (I prefer the second one for the record).  Others had only loss surrounding the accident… a day or two before and until they were fully conscious after a short coma (medically induced or not).

Still others, like Jay, lost their memories but retained their skill sets.  That was the most common that I found, so I chose to give a common result to an uncommon injury.  What surprised me, however, was how many people emailed me asking who in my family had suffered such an injury–how did I know what it was like?  I didn’t.

I just read medical articles–most without anecdotes–to learn what could happen.

Another thing Jay and his family taught me was to embrace truth and beauty–even if it comes from an uncomfortable source.  The Hindi festival of lights was very difficult for me to read about. Parts of it made me want to leave it out completely, but I saw truth in other parts and I learned from it.

All things must be compared to God’s Word before we embrace them, and not all things related to something that fits in God’s principles will be appropriate for Christians, but I learned to reject only that which God has not allowed for His people.  It was a difficult lesson for my natural love of rules and formulas, but God is very good to me.

Raj.  What can I say?  I love his wit, his acceptance of his son–even when he doesn’t understand Jay–and the love he inspires in his wife and son for him. Raj and Amala blessed me.

Hope and faith–the deepest part of who we are and how it makes us respond to others.

I was impressed with the boldness of Hope’s faith combined with the respect she has for those who don’t share it. Jay has the gift of seeing to the heart of a matter; a gift I think he shares with the author.  ~LisaK

Jay is tenderly and gradually drawn into faith in Christ, while, at the same time, Jay and Hope’s friendship overcomes trying circumstances over the course of more than a year. This is the story of Jay’s journey to hope and Hope.   ~Barnabaswoman

Another very refreshing aspect of this story is the journey Jay takes as he discovers who Jesus is.

I’ve seen too many Christians become offended by the doubts and questions thrown their way. Jay was allowed to question, he was given the freedom and time to search for answers and possibly most importantly, he had a friend who let him make his own decision. ~ Lynn :o)

This is a review full of firsts.

Let me explain. I am a reader – a very avid reader. I have read so many books this year that I can’t even begin to count. But this is the first time I’ve stopped to review a book. This is big. I’m just not a write-a-review type of person, on anything, even when I’m blown away by the product. I am THAT impressed with this book – that I took the time to sit down and tell you about it.

My other first is this: This is the first book I’ve read by Chautona Havig. I’d never even heard of her. I am in love with her writing style. I cannot wait to read every single book she has out. I thought I knew of every good Christian author but I’d managed to miss this author somehow.

So glad I found her!

This book was so emotional and personal. I felt like I knew these two people – Jay’s character is still with me. He was so very real to me. I love who he was and hope to find someone like him one day. 😉 A girl can dream! This book made me laugh, cry, and think real hard. I’d say that makes this book a winner. If you are debating on whether or not to read this book, please do yourself a favor and read it! It’s got a unique storyline and genuine, likable characters that feel more like people than characters. This is also a book that I could read over again later – after I’m done thinking about it from the first go ’round. :).  ~ejay429

This book is about faith.  Faith in the Lord Jesus, of course, but in the Hope that is within Jesus’ followers.  It’s about trusting the Lord to draw people to Him when it doesn’t seem like He’s paying attention.    But of course, Hope (upper and lowercase hope) plays a big part in it.

Hope in the Lord, hope in the face of dreams shattered, and hope for a brighter tomorrow.