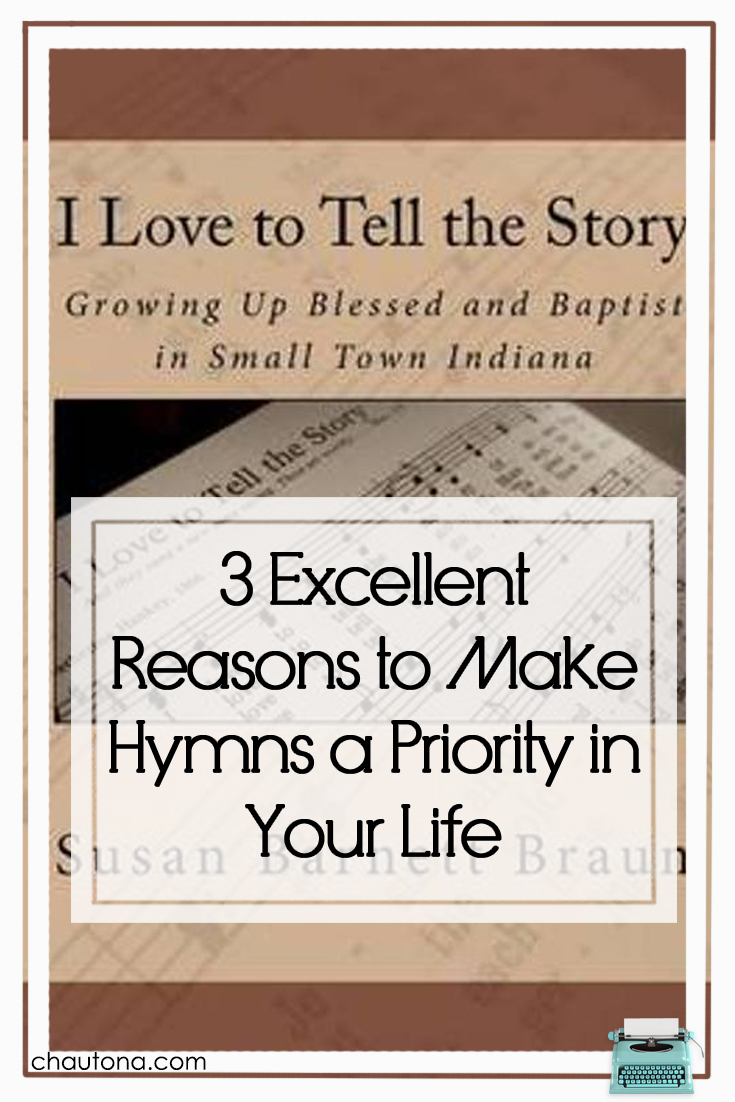 Humming, “I love to tell the story…” began the questioning. “Are you like her? Do you sing hymns when you’re stressed or happy?”

You know that old saying, “If I had a dollar for…” Yeah. I could almost pay the mortgage every month with that one. Or at least, it feels like I could.

I also never know how to answer it. See, I do. I’m always singing—sometimes hymns, sometimes old pop music from the ’40s or ’50s. Sometimes one right after the other.

Seriously, in anticipation of this post, I made a “playlist” of the songs I’ve sung over the past week. It looks a lot like this:

And more. Way more. Trust me. I sing when I don’t even know it. Don’t believe me? I sang from Bishop to Ridgecrest on the way back from our author retreat a couple of years ago. That’s 140 miles that Clark and April had to put up with me singing everything from “Tomorrow Will Be Kinder” to “The Sand and the Foam.”

But hymns? Yeah. I’d guess about half what I sing are hymns. From joy-filled “Hallelujah Praise Jehovah,” to broken, “Come Thou Fount of Every Blessing.” Some of them, like “In the Garden,” I kind of feel guilty for singing. After all, it’s not exactly Scriptural. But it’s beautiful, and I think it reflects symbolism that is. I hope.

What does it have to do with Aggie?

Well, when I went to write Aggie’s character, I wanted to make her more purposeful with how she sang her hymns. Yes, sometimes when I need to kick my butler in gear, I’ll sing “To the work, to the work, we are servants of God…” However, it isn’t always my first response. Wish it was.

Confession: I often start talking to myself—saying what I want to be the truth… repeating it until I know how to behave the next time. It’s weird, but it’s me. Then I sing.

Still, like many of my readers, I’ve learned a lot from Aggie, so when I had the chance to review a book, I Love to Tell the Story, where hymns made an impact on someone’s life, I requested a review copy lickety splickety. And then I learned a few things. Three, to be exact.

Note: links are likely affiliate links that provide me a small commission at no extra expense to you.

3 Excellent Reasons to Make Hymns a Priority in Your Life

I Love to Tell the Story… I’d seen another book by that title years ago—all about the backgrounds of many of the hymns we sing. It included John Newton’s salvation story on that slave ship and Horatio Spafford’s horrible inspiration for “It Is Well with My Soul.” I sing that one often, myself.

This book, however, had a subtitle. Growing up Blessed and Baptist in Small-Town Indiana. Well, the first church I ever attended regularly was a small Independent Fundamental Baptist church in Ventura, California in 1981. While the author, Susan Braum, is a little older than I am, it’s not by much. California isn’t Indiana, but I figured I’d relate to how hymns impacted her story just the same.

Look, I don’t know why I didn’t catch it when I requested the review copy, but I Love to Tell the Story really isn’t about those hymns at all—not even about how they impacted her as a child. Well, maybe about how she didn’t always want to sing them as solos, but…

And, I’d have lost out on some fun stories.

Look, I have to be honest. I Love to Tell the Story isn’t a book I would have chosen to read if I’d paid close attention to that synopsis. I don’t know Ms. Braun, so I don’t have a connection to her stories. I wish I’d realized earlier so I could have looked her up on social media and gotten to know her a bit better before I dove in. Memoirs are usually most meaningful to those who know the person unless the person is from someplace very different or has lived through something tragic.

For that reason, I should have gotten to know her a bit first.

But between my own history singing many of the same songs that Ms. Braun references as inspiration for each chapter, her stories, and the way that hymns seem to linger with people long after they’ve stopped singing them, as I read, I learned those three things I mentioned.

First: Hymns are like the soundtracks of our spiritual lives.

But my spiritual life has a soundtrack, too.

Second: (related to the first), Hymns are a way to pray when we can’t find words.

Look, I know the Holy Spirit fixes our fumbling, bumbling words and makes them a sweet aroma to the Lord. I know this. But I’m that person who would just seriously say, “Well, Holy Spirit, You know what I need, so can you fix me up with the Father?” Yeah. I’m that person. So hymns give me a place to start on the rare occasion that words fail me.

Third: Hymns join hearts together in a special way.

Okay, so all spiritual songs do. I get that. But much like a story, Ms. Braun tells of how even “non-church girls” sang hymns at a party once, they are kind of a unifier. Even the secular world will occasionally sing “Amazing Grace” or “How Great Thou Art.”

So, with all this hymn talking, what did I think of the memoir?

I Love to Tell the Story is an interesting story, although it’s a bit disjointed. Stories go back and forth in time enough that I had trouble following how old Ms. Braun was in some spots. The end, also, seemed rather rushed. We spent about three-quarters or more of the book with an under-eleven or so Susan and then the rest had a few chapters of her in high school.

Recommended for folks who grew up in the late sixties through the eighties. There are enough cultural references that you’ll have a walk through memory lane. Also recommended for people who feel like if you grew up in an evangelical or fundamental home/church environment, you’re doomed to hate God and anyone connected with Him. Ms. Braun defies that notion. As do I.

Still, if you love hymns, I Love to Tell the Story might interest you.

Previous Post: « Is True Crime My New Favorite Fictional Escape?
Next Post: Why Every Great Sleuth Needs These 3 Important Things »