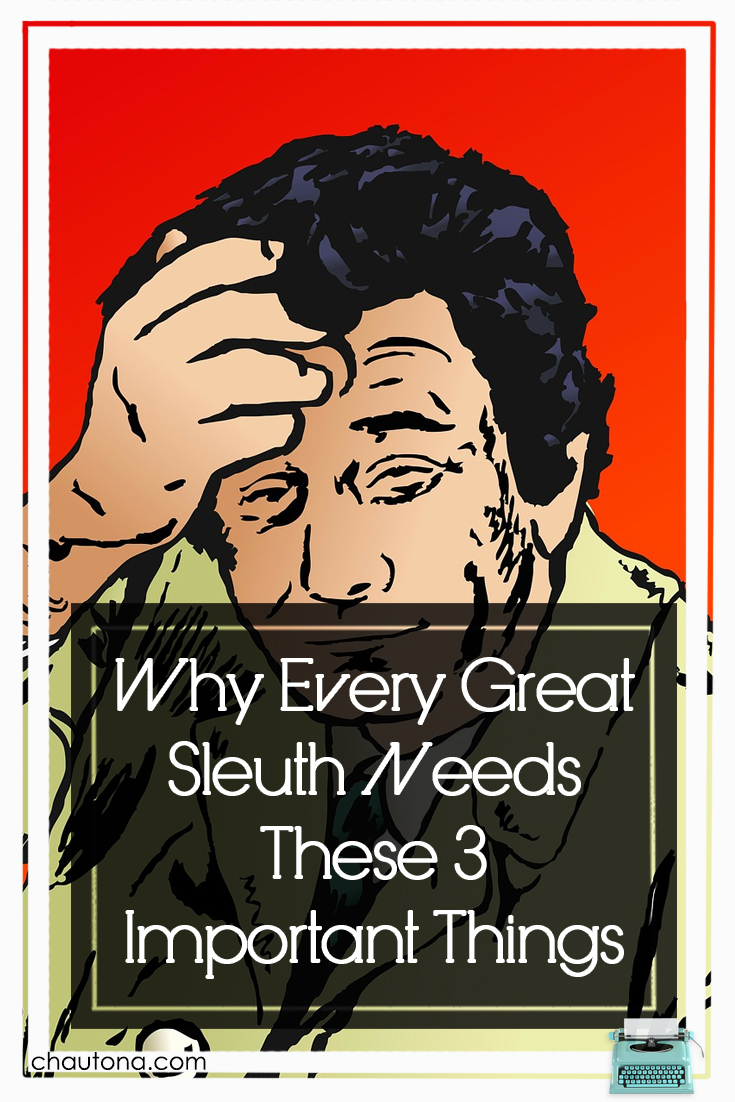 It happens every time. #1daughter and I sit down to watch a mystery movie and within five minutes, we’ve pegged whodunnit.

For us, the game isn’t in figuring out who, but why—or better yet, not getting sidetracked by excellently-placed red herrings and plot twists.

It drives my son-in-law crazy.

To be fair, he wasn’t raised on a steady diet of Nancy Drew, The Hardy Boys, Trixie Belden, Meg Duncan, Phyllis Whitney, and later, Agatha Christie, Dorothy Sayers, Sir Arthur Conan Doyle, and… and… and…

While other girls were devouring teen romances, I was trying to figure out whodunnit, and why. Yes, I read a few of those romances, too. Basically, if there was a book nearby, I read it. Even the fluff. But if a good book came along, I tossed that pile of sappy goo so fast the girl got dizzy from spinning in the air instead of the smoldering gaze of the guy.

Well, I wouldn’t go that far, but I have discovered that you will find some similar traits among detectives in books, TV, and movies. Things that make those characters stand out and be interesting.

And there’s a reason that good sleuths need them.

Why Every Great Sleuth Needs These 3 Important Things

(at least in fiction, anyway)

Before I tell you why I guess I should tell you what those things are. I want to point out that these aren’t necessarily skills that make you capable of being an actual detective on your local police force. That would require something else. I’m talking about what makes Jane Marple, Poirot, Nancy Drew, or Sherlock Holmes a great sleuth—and why.

I’ve heard and read it argued that it doesn’t matter if the detective in a novel is interesting—the crime and the process in solving that crime are all that should matter. I disagree. When you think of well-known fictional sleuths, you think of people more than the crimes they solve (I accidentally wrote “commit” at first and am still chuckling). We think of Miss Marple’s sharp mind that manages to come off as a bit ditzy at the same time. Or, we think of Hercule Poirot’s fastidiousness. Even if we don’t like a character, we must enjoy not liking him or her. It isn’t that a character must have a good personality but rather that he has a strong one.

Let’s face it, without curiosity, no character would ever follow up on that first clue. Without intelligence, the character wouldn’t know what to do with once he did. I put these two together because I think a character must have both working together or he or she becomes flat and unrealistic.

Some people think it requires intuition and experience. While those are excellent qualities in a sleuth, I wouldn’t say Nancy Drew had much experience. And while her stories are a little predictable and hackneyed, as an introduction to the genre, they’re excellent. What she didn’t have enough of, in my opinion, was imagination.

On the other hand, someone like Mrs. Pollifax from The Unexpected Mrs. Pollifax and the other dozen or so Pollifax books, hadn’t any extraordinary life experiences at all before she ended up on that first mission to Mexico, but she did have an abundance of imagination, and that imagination got her out of a world of trouble.

In fact, I consider her to be America’s, Miss Marple. If you’ve never read one of her books, you’re in for a treat except… There are occasional foul words. Usually when John Sebastian Farrell is around. Although, once or twice she lets out a well-timed, deliberate word just to satisfy her own frustration. I can’t condone it, but every time it happened, I understood it. You’ve been warned.

That said, if you listen to the audiobooks read by Barbara Rosenblat, you’re in for a real treat. She’s amazing.

So, why does every sleuth need all these things?

Because, in my not-so-humble-opinion, they form this super-cool trifecta that feeds off itself. The character’s intelligence affects that imagination. Imagination is reflected in personality, which dictates how that intelligence is shown to the rest of the world.

Every one of my favorite fictional detectives has all three of these. Some have other things—intuition, people-reading skills, pattern recognition, you name it. However, every one has these three, which is why I try to put them all in every one of my sleuth-y characters.

I really wanted Madeline to be not quite so intelligent. Just observant. It didn’t work. No matter how hard I tried, she refused to be anything but observant and intelligent.

If I could add one more, though, I’d say humorous—whether deliberately or not. All of my favorite detectives make me laugh in some way. However, since that’s more the skill of the author rather than something built into each character, I didn’t let myself choose it.

Writing this post showed me another thing I’d never noticed.

Two of my “sleuths” are as similar and opposite as they can be. Madeline Brown and Faye Hartfield. But they have three important things in common. Personality, curiosity and intelligence, and imagination.  😉

Previous Post: « 3 Excellent Reasons to Make Hymns a Priority in Your Life
Next Post: What If Living The Dream Became Your Worst Nightmare »