“You wake up in an unfamiliar room.  Picture it—is it a living room?  A bedroom?  A kitchen?”

The class eyed one another with a predictable combination of confusion and annoyance. Seated square in the middle of the room, Lance Pengully kept his expression bored— a move of self-preservation. But his mind whirled in a dozen directions.  Why does it matter? If it’s unfamiliar, isn’t that enough?

Someone else—someone with enough peer clout to get away with it, of course—asked the question.  “Who cares?”

Ms. Faber gave them all that familiar, annoying smile. “Well, to the two women in Rockland who have experienced that, I suspect it matters a great deal.”

“Oh, yeah!  I heard about that.  So we have to write what we’d do if we woke up and didn’t know who or where we are?”

Lance eyed Fatima Terzi before turning his attention back to Ms. Faber. The woman shook her head.  “Let me finish.  Choose your rooms.” After a pause, she smiled and added, “Now tell me if the doors are open or closed. I want seven hundred fifty words on whether the doors in your unexpected rooms are open or closed and why you think yours are whichever they are.  On my desk Monday.  No exceptions.” 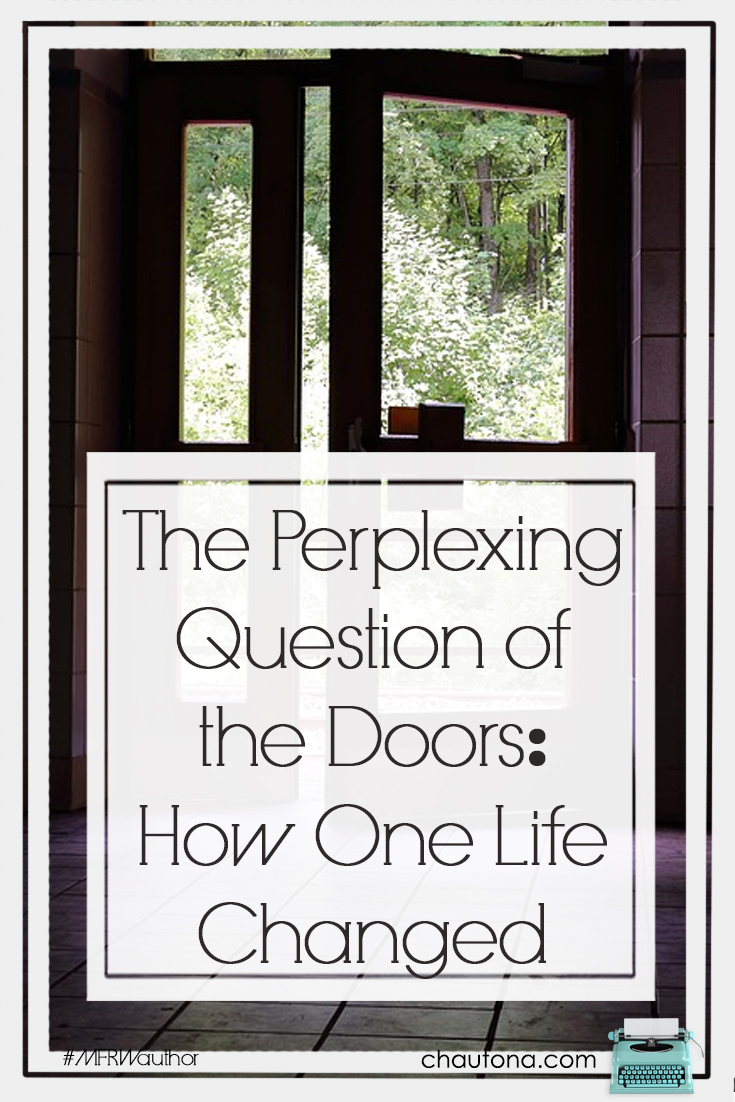 Groans filled the classroom, Lance’s with them.  But despite it all, he couldn’t keep his mind from wandering to the question.

In AP History, he tried to focus on the effects of the Civil War on American economics, but his mind strayed to the odd room with a desk, couch, and excessive numbers of fichus trees. They grew from nearly every real and false corner created by furniture. A bookshelf there, a low cabinet over there—for files?  Probably.

“Mr. Pengully.  Perhaps you would like to explain how reconstruction affected Northern economies?”

The use of his last name meant the teacher had called Lance several times before resorting to his “Proper tone.” The white board gave no hints.  Eyes bored into him.

Lance knew the answer. In fact, the index cards he used for studying sat stacked before him with the answer on the top card. But his mind refused to escape the question set forth by Ms. Faber.  “Sorry, Mr. Janiver. I’m having trouble concentrating.”

Hanna Sempleton kicked the back of his chair.  “It’s right there.”  The attempted hiss filled the room.

“Hanna seems to think the answer is before you.  Can you, perhaps, train your mind on it long enough to give us a simple answer?”

Sure, it worked. But the moment he received the reluctant nod of approval, his mind returned to the doorless room.

Except it has doors.  I just can’t see them.

The question plagued him through Biology and band practice. Never had his trombone hit so many horrible notes. Half the band members tried to get a pizza party together, but Lance waved them off and took off for home.

Officer Freidan waved at him. He only noticed when the guy stopped and called out his name.  “You okay, Lance?”

“Fine.  Just focused on an assignment.”  He eyed the cop and took a risk.  “Do you like rooms with open doors or closed ones?”

“Depends on the room. Depends on what I’m doing.  I like the bathroom door open unless I’m in there.  Then I want it shut.”

Good point—and so not helpful. But Lance nodded.  “I just wish I could figure out what kind of room it is. I’ve never seen one like it.”

They sat there—well, Lance stood—in the middle of the road while Lance described the assignment, the doors question, and his room.  “I just don’t get it. Why did I think of that room if I’ve never seen one like it.”

Lance sagged.  “That’s just the problem. I can’t.  It’s not just an assignment anymore. I’ve got to know.”

“Been there.” Officer Joe gripped the steering wheel and stared through his windshield out over the street.  “Well, if you’d said fish tank, I’d have said it was a psychologist’s office—you know, some sort of counselor.  Sounds like every one I’ve ever seen on TV, but I can’t imagine one without a fish tank.”

But as the man spoke, Lance grew excited. “That’s it!” He flashed a now-skeptical Joe a grin “I bet the fish tank was in the lobby.”

“Well, happy writing.” Joe put the car in gear and Lance turned away. A moment later he asked, “So are the doors open or closed?”

Instant deflation.  “I don’t know. But maybe now I can figure it out.  Thanks.”

Thanks for clearing it up and making sure it’s still confusing.  What a guy.

Wednesday night through Friday night, Lance fought the question.  He tried describing the room—on paper, in his mind, to his uninterested cat, even to his over-interested mom. When frustration sent his pen flying, His father came upstairs, sat on his bed in the semi-dark room, and gave him that, “I’m going to solve your problems” look.

“You’re making too much of this assignment. Do it. Choose open or closed and write that answer. Ms. Farber wouldn’t want you torn up over a simple question.”

“You think I haven’t tried that?  I write a line and change from open to closed. I get half a paragraph in, and I’m back to open.”

Exasperation exuded from his father’s tone, his eyes, the way he jumped up, with hands in the air. “Fine. Do what you want.  But don’t come home with less than a C on this.  There’s no excuse for not having it done.” As the door closed behind him, Lance heard him mutter, “You could have written two papers by now—three.”

Frustration boiled over until he shoved everything off his bed and pulled the covers over his head.  The room filled his dreams, but the doors—he knew exactly where they were, but he couldn’t see them. Round and round the room, his hands fumbled, searching for secret doors, but they never materialized.

On Monday, the class filed into the room, shuffling, laughing, jostling. Lance ignored teasing, mocking calls, and jeers as he passed them.  He paused by the desk and handed his papers directly to Ms. Faber. “Hardest assignment I’ve ever done, and I’ll probably fail.”

“On the subject of the room and doors?”

“Then at the very least, you passed.”

But hours later, in the comfort of her own home at the dining table, Barbara Farber spread out the day’s essays and pulled Lance Pengully’s to her.

She flipped the cover sheet and found a short note.

I couldn’t answer the question—not like I thought you meant me to.  I tried so hard to see closed or open doors, but I couldn’t. Then it hit me. There were two doors. One door was open—one closed. So I did the assignment, and I’ll probably fail, but I don’t think I care. Because I learned something. I learned that we sometimes open and close the doors in our minds before we ever actually get to them in real life. And maybe that’s the real issue—that opportunities are there, but it’s what we make of them that counts. I hope when I face them in the future, I open the right door or close the wrong one.

Before beginning to read, she scrawled an A on the top right corner and circled it. Flipping back the note, Barbara sank back in the chair and read.

As you’ve probably surmised, today’s blog prompt was supposed to be me answering that question. But like Lance, I found it impossible. So…

Tell me.  Do you like questions like that?  How do you answer them? I’m totally lost. I see all the sides and don’t want to commit!

Previous Post: « What Happens When You Find Yourself in a Book?
Next Post: When You Root for the Wrong Team: Out of Darkness »