Last September, I got a phone call.  Now, anyone who knows me knows how much I love the phone.  *cough*  Picture it.  Ethan is trying to convince me he’s paying close attention to his math book while Wall-E plays in the background.  Andra is STILL clearing the counters from lunch, and Lorna is… well I am afraid to try to remember what Lorna was doing.  Roast simmers in a crock pot, the air is a balmy 99 degrees, and I’m sitting on my bed talking to a stranger about a strange creature in a strange place.

Now, I have to confess something.  I loved the conversation.  It didn’t feel like I was jabbering away at the guy for an hour and a half… but I did.  I’ve often wondered if he got off the phone, turned to his wife, and said, “What on earth did I just agree to do?  This woman’s a freak!”  I thought about asking… but I really don’t want to know.  Just sayin’.

Now, I’ll confess, I was nervous.  I had a mental picture of Wynnewood, complete with East and West being reversed in my mind… weird when you consider I have an excellent sense of direction every other time… apparently they were reversed in Medieval times.  It was a backward time in history, so that shouldn’t surprise us.  Back to nervous– I was convinced that no one could put what was in my head on paper.  How could they?  I drew an amazingly pathetic map.  I mean.  P.A.T.H.E.T.I.C.  Just sayin’.  I told him about Dove, about Philip, I gave away plot… the works.  He asked questions like

“What kind of soundtrack fits Wynnewood?”

“I was thinking about using Kells for the font, what do you think?”  (Like I knew what that meant)

He was AMAZING when it came to pointing out flaws or giving me little tidbits that I could use in the story.  “Well, the Druids feared hemlock…”  Oh yeah???  YIPPEE!  Down with the Druids I always say.  Gimme some hemlock baby!  (Ok, that’s just so not me!)  We discussed the difference between wooden castles and stone, being up above a moat… the works.  I left that conversation with all kinds of amazing information that weeks of research hadn’t uncovered.  I’m sure he’s sick of my constant facebook questions like, “What can you tell me about dwarves…” So, with the impending release of Cloaked in Secrets, the sequel to Shadows & Secrets, I thought it might be fun to interview Craig.  And, because I’m cruel, mean, nasty, and socially unacceptable (and those are my virtues), I thought I’d break the interview up into five parts.  Just to keep things lively don’tcha know.  I give you… “The Interview”  *insert impressive and slightly ominous music here*

Well, Craig, we want to know more about you.  First, will you tell us a little about your family?

Michele “introduced us.”  What kind of dirt on her would you like to share with 200 of her closest friends?

One time in band camp……. seriously though I never went to band camp but Michele and I did first meet in Junior High Band, fast friends then and friends we have been ever since.  She showed me the ropes of the ever intimate world of marching and concert band in Junior High and when I followed her into High School she was gracious enough to do the same. LOW BRASS FOR LIFE!

What do you do for a living?

One summer during college I was introduced by my then boss thusly, “this is Craig he’s studyin’ to become an Illustrationist.”  It stuck.  Essentially I provide images when words won’t work.  So web design, industrial design, package design, product conception, book illustration, game illustration, all of that fits in there.

Do you have any formal education/training in art?  If so, how much and how did you choose your course of study?

Yup, AP Art pre college and a BFA from the Cleveland Institute of Art with a major in Illustration.   AP Art was a year in High School where we had to produce 2 portfolios of work, one was a catch all with 2-D and 3-D work the other was a group of pieces all on one subject, aka a thesis.  Mine was on brass instruments (go low brass!).  College was a 5 year program, 2 years of foundation (painting, drawing, design, art history), 3 of a major with a thesis in the final year with a strenuous critique system throughout. 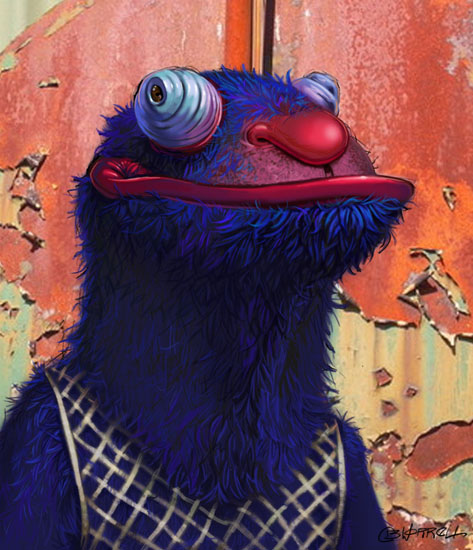 I chose Illustration because I love stories, always have and I love the idea of communicating ideas visually. How did I choose my course of study?  I wanted a course that would give me a strong footing in the fundamentals that encouraged interaction within all the majors.  Luckily a couple of friends had gone to CIA before me and I had a really good High School Art Teacher who gave me educated and honest counsel and CIA seemed like the place for me.

Stay tuned tomorrow for the next installment of, Craig– wonder artist extraordinaire!