Mail order brides.  Marriages of convenience.  These themes appear in quite a lot of historical fiction, but to find them in a contemporary novel–well, I just had to try it.  Buying Love appears to be Toni Shiloh’s second book and the first in the Maple Run Series. 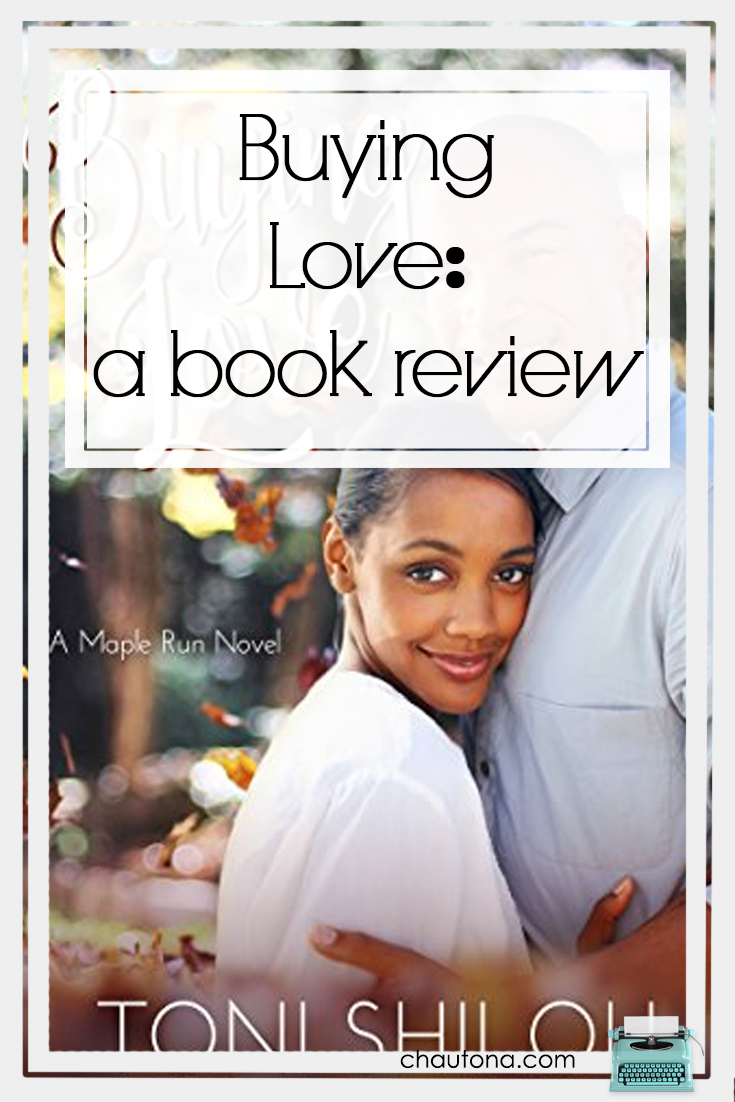 Okay, this is weird.  I’ve been sitting here for twenty minutes, trying to figure out what I want to say about this book.  I rarely have trouble discussing a book I like.  And I did like it.  While straight-up romance isn’t my usual genre, this book has more than just girl advertises for boy and falls happily in love in approximately 50K words.

I’ve scheduled Toni to do a guest post here on the 23rd, and I can’t wait to learn more about her inspiration et cetera.  Meanwhile, I’m supposed to be writing this review, and I’m frankly stuck.  So, I’m going to do a variation on my “quick and easy” version while my brain thinks through it.

A classic fictional topic set in a totally new setting.  That alone–a fabulous start to a good book.  But then Ms. Shiloh added a fun, quirky cast of characters.  Somehow she danced so close to the “Mary Sue” line and then would waltz away again.  I thought it was pretty impressive, and  I also really liked the unusual dog choice.  Okay, I know, but really?  A St. Bernard in Virginia?  Thank you for stepping out of the cliche box!  I also really loved how she showed the characters looking to the Lord for direction–most of the time anyway!  If it had been all the time, we’d definitely be talking about a “Mary Sue” convention.  (for those who aren’t familiar with the term “Mary Sue” it’s just an overly perfect character with, at best, token flaws to try to make him/her seem “realistic” when he/she is anything but!)

This is always the worst part. I could talk about how I didn’t like that she was so blind to things that are obvious to me, but hey.  Without that, we’d have had no plot.  And really, isn’t that how it always is?  We’re blind to what’s right in front of us?

I could say I didn’t like how it was so short (which explains why some parts felt a bit rushed.  I didn’t realize it was a novella until I went looking for word count.  It just slides over the 50K mark.  Writer’s Digest puts that into the novella range). But those are kind of not so bad. Occasionally there was a bit of information dump, but Ms. Shiloh really didn’t let it go too far for the most part.  It just made things drag a little bit in odd places.

Frankly, the worst part of the whole book was the lapse into passive writing.  And while that’s currently anathema (or it feels like it), the truth is that many of my favorite authors wrote with it when that wasn’t an issue.  If you’ve ever read a Mrs. Pollifax book, you’d know why I cringe (and not just because there are quite a few unnecessary words sprinkled through them!).  Between passive writing, head jumping, and mixed pronouns, there’s NO way Dorothy Gilman would have had her books published if she tried today.  And a world without Mrs. Pollifax?  Never!  😉  So while I didn’t like that, it was mostly because I know it will hurt her with certain readerships.

What made me laugh:

Okay, Dwight’s mom.  That woman cracked me up.  I wanted to shake her, but she added a lot of tension and comic relief.  Some of it was illogical, and I just assume I don’t understand what the author was doing with it.  I’m from another side of the country, so it could be a cultural thing.  But sometimes I just shook my head and thought, “Why would you get upset there and not here?”  Then again, it’s probably my brain overthinking things. I do that. I’m not proud of it.

What made me cry:

Okay, nothing made me cry.  I’m not a crier.  I didn’t laugh so hard that I cried.  Nothing was so sad or heroic (the one thing that can get through to my cold, stone heart) that I wept.  I did find it sad that Nina was blind to one obvious solution to the her primary goal.  Normally, I’d excuse her blindness with the “forest for the trees” thing, but I really found that the most implausible thing in the book.

Advertising for a husband?  Not a problem. Isn’t that technically what eHarmony is?  I have no difficulty following that logic.  Wanting to plan out your life and becoming a bit fixated on that?  Easy peasy to do.  But someone in Nina’s situation–with her history?  I just don’t get how she missed the obvious.  Not choosing it for other reasons?   I could give her a dozen reasons why it shouldn’t change her plans–but not thinking of it?

And do I recommend Buying Love?:

Yeah. I think I do.  I won’t pretend it would be the first book I’d pick up to read again, but I will read the next book when it comes out.  Ms. Shiloh has made me care about her characters, and really.  That’s what it’s all about for me.

This book was part of the CelebrateLit blog tour. I received an ARC.  Opinions are mine and not worth the obligatory . 02, I assure you.

Will money ruin everything?

Nina Warrenton is ready for the next step in her life plan—marriage, but no one has proposed. Taking matters into her hand, she places an ad in the newspaper hoping to entice a willing stranger. But when she begins to fall for the small-town chef, she realizes how much she wants him to love her and not her money.

Dwight Williams needs fast cash to save the family restaurant. When he sees Nina’s monetary offer for a husband, he goes for it. He’s determined to save the legacy his dad left him, but can he let it go to prove his love for her?

Can Nina and Dwight find true love, once money has entered the equation?

Have you ever read anything by Toni Shiloh?