Except I couldn’t. The book haunted my thoughts.

A friend said, “What you need is another book. I just finished a great one. Among the Poppies. Try it.”

I went to Amazon and read the synopsis:

The ideal lady wears lace, speaks quietly, and never under any circumstances fixes an automobile. But Gwyn Ruthers has never cared two snaps about being the ideal lady. With the war to end all wars exploding across the English Channel, she leaves behind her restrictive life as a chauffer’s daughter to serve in an all-female ambulance unit in France. She’s not about to let her social status or gender prevent her from serving her country. Not even a handsome captain can distract her from her mission. Most of the time.

Captain William Crawford wouldn’t wish the ravages of war on any man, much less the captivating woman who insists on driving into battle instead of staying safely at home. He can’t deny that the troops need more medical help, but not when it puts innocent women in danger. How can he lead his men against the Jerries while worrying about Gwyn’s safety?

… and promptly popped it in my Kindle Unlimited.

After that, I went to look up more by that first author of that book. It still bothered me that I hadn’t been able to leave a good review for it. You see like I said in that review the author is a good writer—actually, she’s a great one. I wanted more. I wanted something I could rave about.

But there wasn’t another Christian fiction book by her on Amazon.

So…I closed my laptop and went to bed.

Still, by ten o’clock last night, I opened my Kindle account and tapped on the book. Among the Poppies. One thing it had going for it was that it was historical. War-time. Third-person perspective. It wouldn’t compete with what I had hoped to read.

Look, I have a book due. I didn’t have time to read another book right now. But I decided to read the first chapter. Just to see if it was going to be good, you know.

At chapter six, I closed my Kindle and wrote a sentence in Ties That Blind.

And then I opened it again. 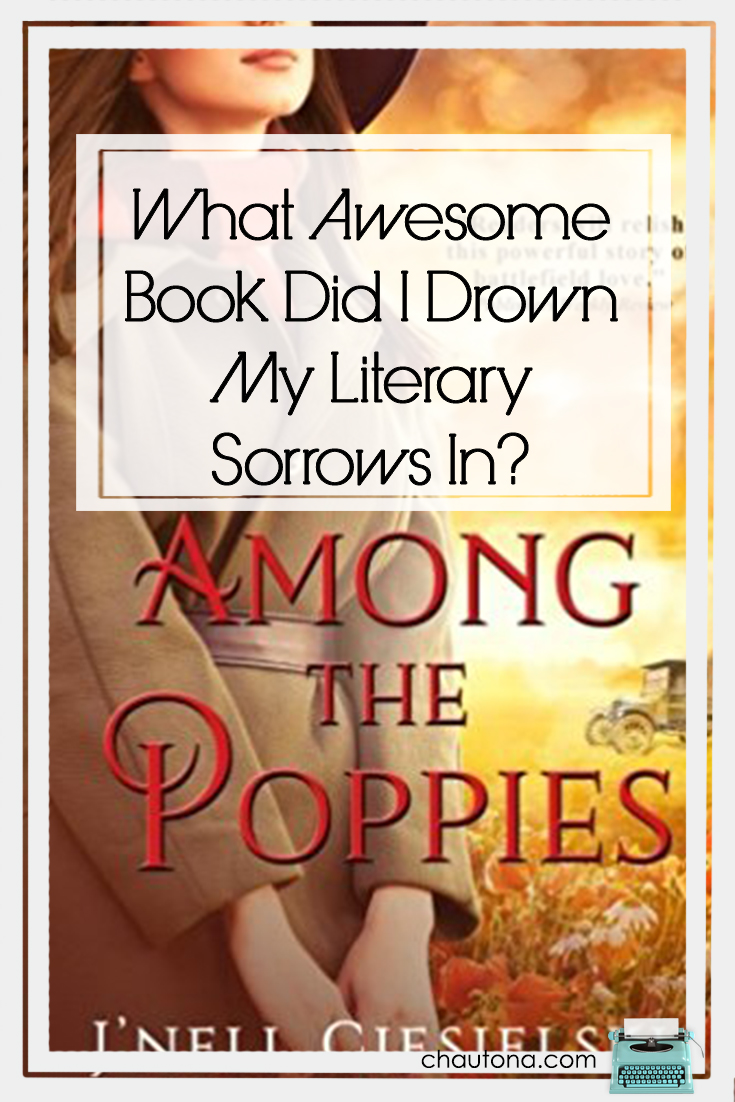 Note: links may be affiliate links that provide me with a small commission—doesn’t cost you anything extra.

I went back and drowned my literary sorrows in Among the Poppies.

Where do I begin to describe the beauty and wonder of this book? How about with the fact that Ms. Ciesielski is a debut author. That’s right. This is her first book, and I’ve got to be honest. It’s better than most authors’ fifth, tenth, fiftieth. I asked about her next. Yeah. February of 2019.

I’m pretty sure that wasn’t rain on my face here in the 106 degree-Mojave Desert. Just sayin’.

So what did she do that was so amazing?

Plot: She took a common storyline—an English girl in WWI goes to France as a nurse—and made me feel like it was new, fresh, original. I didn’t once think, “Oh, this was like so and so’s book.” Not once. The book stands alone, tall and proud.

She paid careful attention to all details.

Setting? Check! I could feel the snow, breathe the musty-leafed air, choke at the stench of unwashed bodies & infection. I basked in the beauty of a French mansion and winced at the horrors of a German “prison.”

History? Check! All the details I needed to really understand what happened around us, I got. Every one. Not only that, but Ms. Ciesielski wove them in so seamlessly that I never once felt like it was added in as a lesson. I abhor preachiness in fiction—whether beating the reader over the head with the Bible or a history/science/psychology etc. Textbook. She didn’t do it. And it would have been sooo easy!

“Easter Eggs?” Yep. I spotted Walt Disney in it. See if you can.

Personality? Yep! But I’ll get to that in a minute.

Ms. Ciesielski provides rich attention to detail without dragging the reader through page after page of unimportant things that serve only to bog down the story. She framed this story in her details, but she didn’t create a Taj Mahal of them. THANK YOU!

One of the best parts, if not the best, has to be the characters, though.

Gwyn Ruthers is plucky, strong, and independent without being obnoxious or too “Mary Sue” about it. She has her weak moments that make you realize that there’s a flaw in her character that actually makes her so strong.

William Crawford, on the other hand, openly covers his insecurities—such as they are—in duty, honor, and obedience to his commands. What he sees in Gwyn, both inspires and prods him to grow as a person. In fact, their weaknesses and strengths weave a unique bond between them that creates a beautiful tapestry of a story.

Even her supporting characters help one another grow as people.

Truthfully, it’s probably the best character growth of the whole cast that I’ve ever seen in a single book. Each character stayed consistent to who they were as a person even while growing and changing in their character arc. Phenomenal.

And then there were the spiritual lessons.

I was almost afraid of these. I wondered if, the farther I got into this wonderful tale, if I’d finally find the flaw in Among the Poppies. Would the author be able to weave in those spiritual truths with the skill wielded with description and historical details? Or, would I find chopped up mini-homilies designed to tack on a lesson?

I shouldn’t have worried. This book contains rich, spiritual truths, sometimes in overt conversation, most often woven through the fabric of the story that you almost don’t even notice.

Ms. Ciesielski planted many beautiful seeds with each spiritual nugget, and I’ve no doubt they’ll sprout as a whole sea of poppies… much like the ones in “Flanders Fields.”

Someone asked me if this was just a “rebound” book.

Was I so brokenhearted over not loving a book that I wanted to love that I just latched onto the next thing?

It’s a valid question. And I have an equally valid answer.

Because you see, if anything, me wanting another book by that other author so much meant that this one already had a strike or two against it. But J’nell Ciesielski hit it out of the park with a home run on the first swing.

And that’s all the baseball you’re ever gonna get out of me. Want to know why? Check out THIS post.

If all that doesn’t convince you how great the book is, I read Among the Poppies through Kindle Unlimited. And immediately, I went and added the paperback to my shopping cart. It’s that good.

Note:  there are about half a dozen tiny typo/formatting issues that might annoy a few people.  However, they may be fixed by the time you read this.  Just warning for those whose reading experience is ruined by typos. Then again, you’re probably not reading this… because of the typos!  😀

You know what?  I want to give one away.

Tell me who your favorite WWI author is (since we can’t ask if J’nell Ciesielski is… Unless you read this already!

Previous Post: « The Secret Confessions of a Disappointed Reader
Next Post: So Why Is Everyone in Love with Just Let Go? »