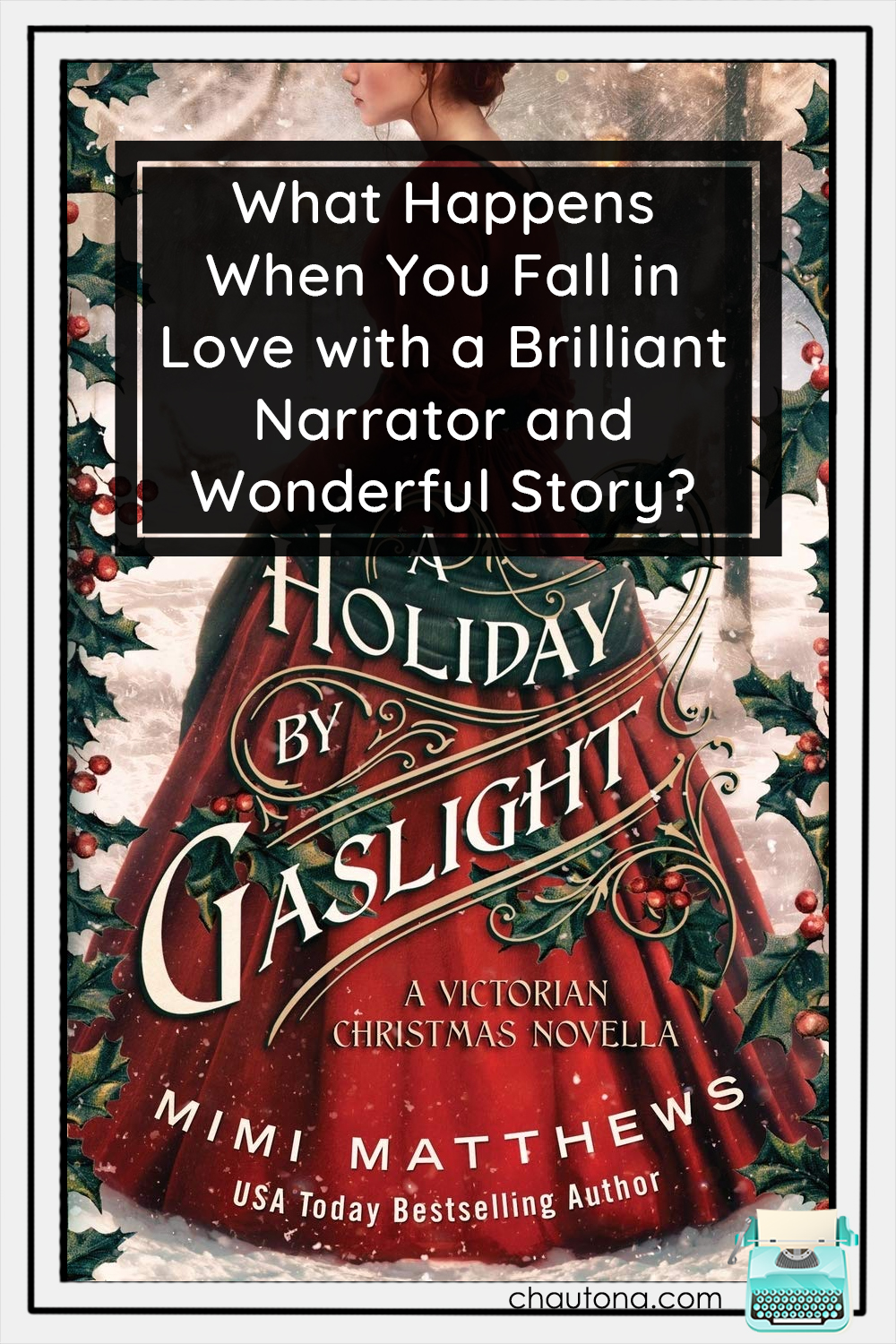 A Holiday by Gaslight. The cover appeared in my Facebook feed… somewhere. Stunning.  I knew I wanted to read it just by the cover! That was three years ago.

I finished my last audiobook on November 30th, so I went scrolling through my Audible library. A Holiday by Gaslight appeared.  WHAT?  I do not remember buying the book.  No idea when I got it, but I clicked play and started listening.

Oh, my Christmas stars! The narrator… guys, the narrator!  We’re talking phenomenal.  How phenomenal you ask?

Oh… how about I “listened to it back to back and could listen again today” phenomenal?  Yes, the narration was that brilliant.

If you love Gaskell’s North and South, you’ll love this Christmas novella.  You just will.  And if you love audiobooks, well… I loved this one!  And, if you don’t have an Audible subscription, they give you a free book for joining!  Just throwing that out there (and yes, I am an affiliate).

What Happens When You Fall in Love with a Brilliant Narrator and Wonderful Story?

I listened to the audio version, so this review is partially about the performance as well. It MIGHT have only gotten 4 stars on its own, but as audio, I felt compelled to give it 5.

Whenever an author manages to blend flawless historical research with beautiful (but not purple) prose and tie it up in a compelling story, I’m hooked. Add to that a clear inspiration from Gaskell’s North and South (at least the mini-series version, anyway) that never once “retold” or “copied,” and what more could you ask for?

The narrator so often sounded exactly like Richard Armitage, that I felt swept into Gaskell’s world but not necessarily her story. There are some Thorntonesque elements to the male protagonist, Ned. And there are Margaretish elements to Sophie, although she is more likable upfront than Gaskell’s Margaret. I even saw small parallels between Ned’s mother and Thornton’s mother (although in totally different ways) and between Margaret’s father and Sophie’s. Even Sophie’s sister reminded me a bit of Margaret’s cousin.

It felt a tiny bit like how Michelle Griep does her “inspired by” books.  Like THIS one.

But there the parallels end. Mimi Matthews created an entirely new cast of characters in her delightful Christmas story. Not one is a copy. Add to that reasonable misunderstandings, attempts to understand, and a few twists that make you blink, and you have a can’t-put-it-down read.

In A Holiday by Gaslight, Matthews gives us a wonderful escape to Victorian England and a romance that I have never seen exactly like this! Maybe others have. Who knows? All I know is this was my first Matthews book. It will not be my last.

Recommended for lovers of good, clean historical fiction with romance that doesn’t make you cringe.

CAVEAT 1: I don’t think this is a strictly Christian fiction book. It doesn’t claim to be. That said, it is written from a Christian worldview as far as I can see.
2. Darwin’s “Origin of the Species” is spoken of a few times. Sophie is enamored with the idea of us needing to adapt to change for the survival of man and society. Note the part she is enamored with. Not the whole of evolution. It’s an incomplete understanding on her part, and neither she nor the author “preach the virtues” of Darwinism. Conversely, Ned Sharpe seems unimpressed by Darwin and states why. From what I could see, this was all about “being adaptable to societal change where you can” rather than, “this is how things are, so become a Darwin disciple.”
3. Language: there are a few words I personally don’t appreciate in this book. Two are of a “condemn to the nether regions sort” and at least two uses of God–one definitely flippant. The other felt more prayerful to me than flippant.
Would I prefer that not be in there? Yes. However, I respect that the author doesn’t promote the book as Christian fiction. Additionally, at least at the time and often now, the British did not consider the particular words used to be “swear words” and so it is very authentic to the time/place.

This will not be my last Mimi Matthews book. Not by a long shot. 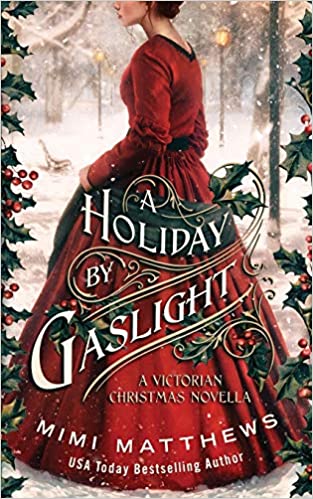 A Holiday by Gaslight by Mimi Matthews

“A graceful love story…and an authentic presentation of the 1860s that reads with the simplicity and visual gusto of a period movie.” -Readers’ Favorite

A Courtship of Convenience

Sophie Appersett is quite willing to marry outside of her class to ensure the survival of her family. But the darkly handsome Mr. Edward Sharpe is no run-of-the-mill London merchant. He’s grim and silent. A man of little emotion–or perhaps no emotion at all. After two months of courtship, she’s ready to put an end to things.

A Last Chance for Love

But severing ties with her taciturn suitor isn’t as straightforward as Sophie envisioned. Her parents are outraged. And then there’s Charles Darwin, Prince Albert, and that dratted gaslight. What’s a girl to do except invite Mr. Sharpe to Appersett House for Christmas and give him one last chance to win her? Only this time there’ll be no false formality. This time they’ll get to know each other for who they really are.

Previous Post: « Only Jesus Can Keep Us All from Being Horrible Monsters at Heart
Next Post: Solve a Murder, Avoid a Killer, and Remain Riveted to This Book »