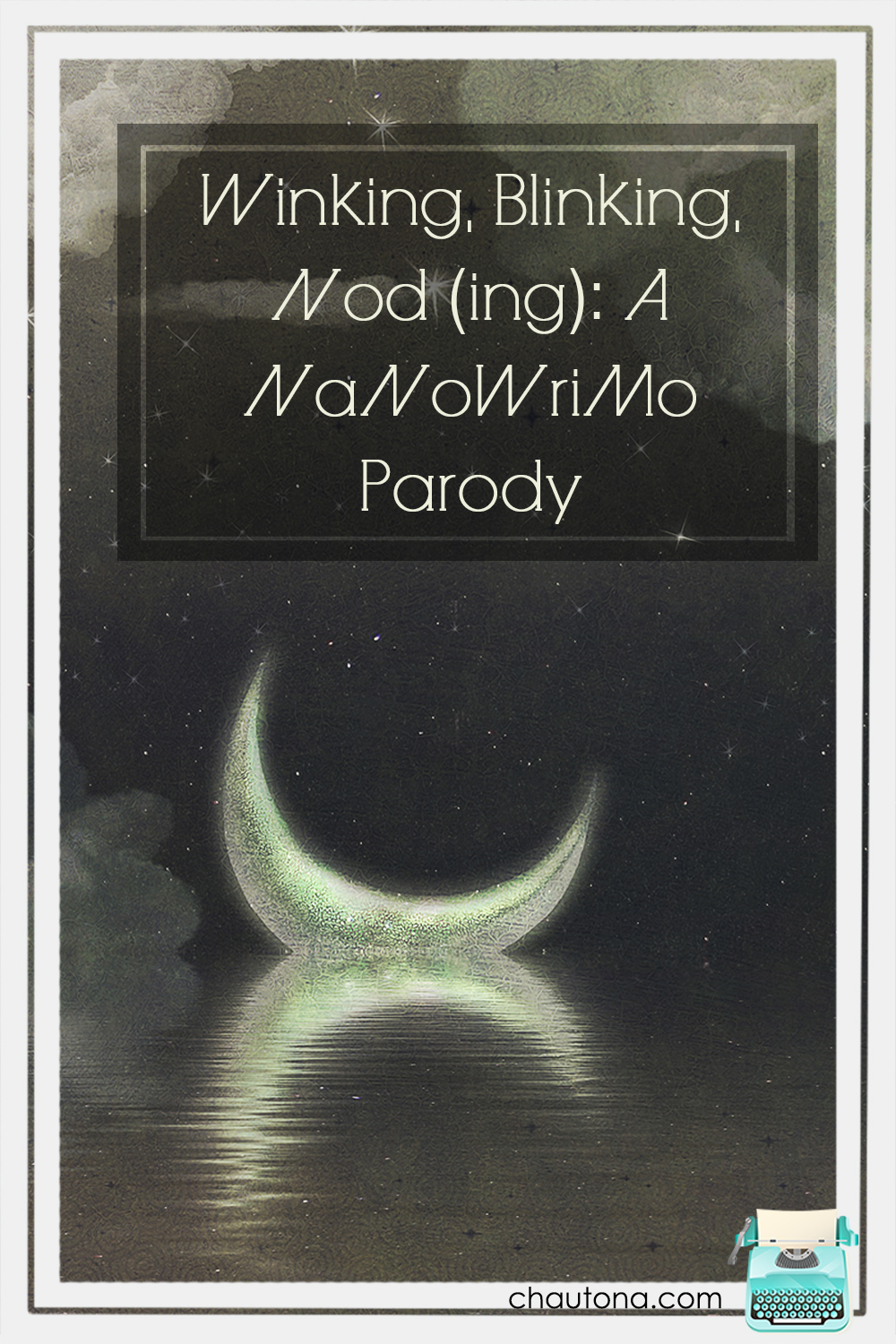 It happens every year… the annual NaNoWriMo (National Novel Writing Month) parody. I’ve done a few of these, of course!

With everything that went on last year, I didn’t even remember if I did a parody.  Guess what?  A bit of searching proved I did.  YAY. Still, this is one of the things I love most about October 31st.  While much of America dons costumes and goes in search of chocolate treasure, I order Chinese food and write parodies!  WOOT!

This year’s isn’t the greatest, but then none of them are really all that great, right?  It was fun, though, and I enjoyed it.  That’s what matters most to me.

Winking, blinking, she nods, one night
Awaiting the coming chime.
But then at midnight, the clock hands strike.
So slow the word count climbs.
“What are you writing? What tale will you tell?”
The left brain asked of the right.
“Of storms and destruction from sea swells
“And how they’ll inspire a fight.
“Bits of romance and faith will I write!”
Said the winking, blinking nod(er).

The left brain laughed and shook the head
As the right brain typed with great speed.
The story emerging through the night long
Kept her emotions keyed.
The seeds of romance rose up on waves
And crashed when the arguments flared.
“What’ll happen next? Will love be saved?
“Have they even a prayer?”
Asked the right of the left, despite the glare,
(of the) Winking, blinking nod(er).

All night long the words she wrote
Of islands with their warring hearts.
But at dawn, there came a sandman afloat
Tearing scribe and tale apart.
Although words still spun and swirled within—
A flight of fancy borne—
Weaving an age-old tale to resume again
Despite the writer’s scorn.
Left brain will war with right from dark until morn
(says the )Winking, blinking nod (er).

Winking and blinking are proofs of fatigue.
Nod (ing) makes writing so hard.
While the right and left brains remain in league
To turn the scribe into a bard (it’s hard).
So fingers fly while brain halves sing
Of wonderful stories to be,
And on the page, such beautiful things
Of sand, surf, and the stormy sea,
Form within the jumbled mind so sleepy:
And winking, blinking, nod (ing).

What am I writing this year?

Well, I’m excited to say that I have… get this.  A TITLE.  Flipping Hearts!  This is the third book in the Independence Islands Series and takes place on Hooper (Hopper to the locals) Island after a hurricane did some serious damage (not too bad but enough!  A TV show weasels their way into a contract to film there and Abel Crawforth’s son is in hot water–as is the girl he THINKS hoodwinked him into this. OOPS!

I hope you’re as eager to meet Brooks and the whole film crew headed to Hopper Island in July! Meanwhile, my next book in the series, Bookers on the Rocks, releases on January 26th!

Previous Post: « Heroes Are Underrated, but Not in This Delightful Novel
Next Post: What Is This NaNoWriMo Thing All About? »