The email loaded in my inbox—a “friendly reminder” that I had a book due to review. One problem: I thought I’d done it.

And, the one I thought it was, I had done. Unfortunately, it just wasn’t that book.

So, instead of sending my Lara on a trip across the country, I sat in my Denny’s booth and opened the book. Eager. Excited.

See, it’s been a long time since I read anything by Tracie Peterson—so long, in fact, that I can’t remember any of the titles I used to have. So, when I had a chance to read a review copy of her latest, When You Are Near, I hit that request button so fast it was almost embarrassing.

The night manager came over at about page twenty-six and asked what I was reading. I told him. He asked if I liked it.

And I didn’t know why. I mean, Lizzy, the main character, interested me. She’s fun, quirky, and wonderfully flawed. Even the plot, if it followed the synopsis at all, would be engaging and fresh.

He got this look on his face and I cringed inside. Silently, I pleaded, Don’t ask. Please don’t ask.

He asked. “So what don’t you like about it?”

Occasional contradictory statements. First she doesn’t want to get married. Then she hopes to raise a family in the family home just a few pages later.

So I read it. That seemed to make sense to him. Uncomfortable, I got off on the subject of the previous night’s book, and he left me alone.

An hour later, I realized that I hadn’t looked at the page numbers in a while. Thirty pages had passed since the last time. Of course, that was much different from every other page like I had in the beginning. 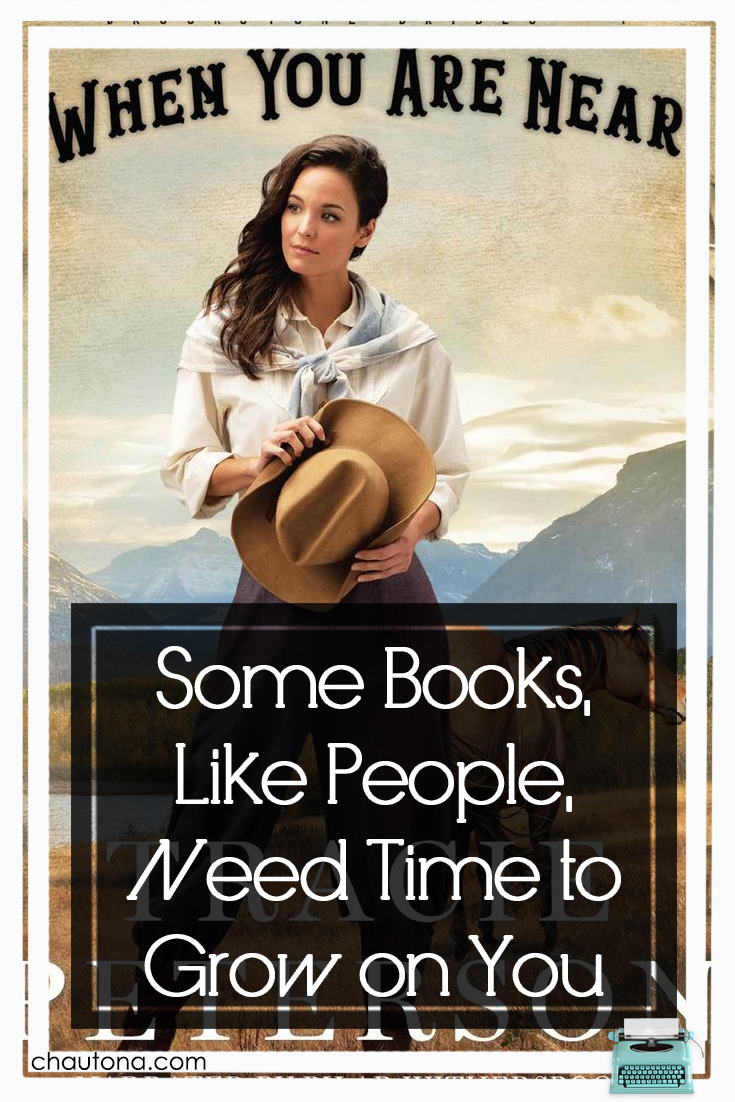 Note: links may be affiliate links that provide me with a small commission at no extra expense to you.  Additionally, I requested a free copy to review and was provided with one.

Some Books, Like People, Need Time to Grow on You

When You Are Near was like that for me. Maybe it just wasn’t the right day for the book, or perhaps it’s not the right opening for me. I don’t know. What I do know is the relief I felt when I went from being grateful for an interruption to frustrated when one happened.

That’s always a sign of a good book—that, “Would you just go away so I can read” stabbing of the straight pin into the pages. (Yes, I use straight pins for bookmarks. They don’t fall out easily, they don’t get lost, they don’t harm the spines, or anything else. Love them suckers).

When You Are Near reads in a casual, comfortable style.

Most turns of phrases didn’t feel too modern, (although the “come to Jesus moment” certainly felt crazy modern in a turn-of-the-20th-century novel) or too over-used.

Tracie Peterson took the time to make us care about what was underneath Lizzy’s armor. Instead of knocking it off, she peels back layer after layer until poor Lizzy is left stripped and vulnerable—right where the Lord does His most beautiful work.

In Rebekah Brookstone, we see the kind of gentle strength I’ve always admired. She knows when to be firm, when to be forgiving. At the beginning, I wanted to shake her. By the end, I decided I want to be her when I grow up. I think her unveiling came in very deliberate moves written by a skillful pen. The gradual shift from seeing one character as the strongest to the other couldn’t have been more well done, I don’t think.

Some readers may take issue with one very awkward, suggestive conversation.

I tend not to get most double entendre. I got this. It was… awkward. There was a point to it, and it was by the bad guy, of course, but there you have it. You’ve been warned.

When You Are Near is recommended for lovers of horses, historical fiction, and fiction with purpose. The spiritual lessons are woven into the story in a natural way so that even when someone is “preaching” at someone else, the reader doesn’t feel sermonized—just encouraged in the Lord. Lovers of Jen Turano’s books, like Flights of Fancy will enjoy When You Are Near.

Previous Post: « What If Living The Dream Became Your Worst Nightmare
Next Post: Dare to Be an Anna in a World of Hurting Kings »